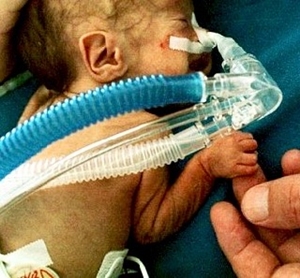 The best ventilation strategy to prevent chronic lung disease, one of the most significant complications in preterm infants, has been evaluated in a Canadian meta-analysis.

The study compared seven different ventilation strategies. Based on data collected from 30 different trials and over 5,500 infants younger than 33 weeks’ gestational age, the lead author of the study, Dr Tetsuya Isayama, said one strategy appeared more effective than most.

Using and promoting this strategy will have major global ramifications, he said. “These preterm infants have a high risk of death or severe complications, many of which come from the fact that their lungs have not yet fully developed,” said Isayama, a PhD candidate in department of clinical epidemiology and biostatistics at the Michael G DeGroote School of Medicine,. McMaster University.

“Although a number of factors contribute to long-term breathing problems, or chronic lung disease, one of the major factors is lung injury from too much pressure and expansion from the breathing machine with a large breathing tube in the windpipe. Therefore, it is important to select as gentle breathing assistance as possible for preterm infants – but until this study, the best method was not known.”

The recommended strategy called LISA, or Less Invasive Surfactant Administration (on Continuous Positive Airway Pressure) was the best in preventing the primary outcome of death and/or chronic lung disease as well as other secondary outcomes including severe intra-ventricular haemorrhage and air leak.

LISA is a non-invasive ventilation strategy in which infants are given surfactant – a substance that keeps the tiny air sacs in the lung open – through a soft, thin tube placed in the windpipe while a breathing mask over the baby’s nose supports respiration. The advantage of LISA is that it can maintain pressure to the baby’s lungs to keep them open while surfactant is being given, while avoiding the use of a breathing tube and too much pressure.

The study found that LISA, on average, resulted in 164 fewer pre-term babies per 1000 dying or having long term breathing problems compared to those when a large breathing tube was inserted into a windpipe and a breathing machine was used.

The originator of the study, Dr Sarah McDonald, said that these are very promising results. “This finding is important for all clinicians globally who resuscitate premature infants as well as researchers and clinical guideline developers who are involved in the management of preterm infants,” said McDonald, a professor in McMaster’s department of obstetrics and gynaecology. “The next step is to determine which infants require surfactant and which do not. We also need to determine which babies with gentler breathing assistance get tired and need more breathing support, and need to eventually be placed on a breathing machine.”