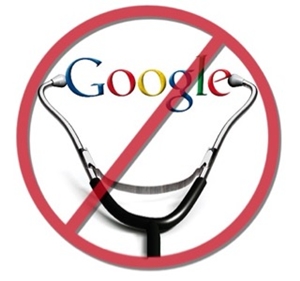 Google has admitted that health content on the web can be difficult to navigate, leading people from mild symptoms to scary and unlikely conditions’, writes Dr Mary Aiken in Quartz. Safer and more-intelligent search protocols need to be created and malpractice protocols must be reformed to discourage unnecessary testing and exploratory investigative procedures.

Every year, Americans spend at least $20bn on unnecessary medical visits. This is one of the drivers behind the spiralling cost of health care, which is predicted to soar to $5.5tn by 2024. Cyber-psychologist Dr Mary Aiken writes in a Quartz report that the last thing you’d imagine is that the internet would have anything to do with this. But guess again.

Medical doctors are already aware of the connection, because they see it every day. Patients arrive at offices and clinics with a “Google stack,” as it’s sometimes called: a pile of print-outs from the online research they’ve done that has led them to form their own amateur medical opinion.

Aiken says in the report that, according to a 2013 Pew study, 72% of Americans search for health information online – about 35% search for diagnostic information, and of those who attempt to self-diagnose, just over half proceed to make an appointment with a medical professional to talk about what they found online. In June 2016, Google reported that roughly 1% the site’s searches are related to medical symptoms.

Aitken writes: “For a number of reasons, most medical professionals aren’t too happy about the self-diagnosis trend. It isn’t simply a matter of loss of control or an undermining of their authority though online medical searches – it can mess with the diagnostic process, because the results can suggest rare or morbid conditions to patients, which in turn can prompt the appearance of new “symptoms.” You search online for “sore throat,” for instance, and find yourself engrossed and horrified by descriptions of oesophageal cancer. Your anxiety escalates.

“Psychologists have studied suggestibility for decades. After reading or hearing about illnesses and their symptoms, humans can often imagine they are sick when they are not. Even when symptoms don’t present themselves, learning about rare and terminal disorders can result in health anxiety – worry, agitation, and nervousness over a perceived illness – which also impacts the number of annual unnecessary doctor visits.”

Aiken writes that the increase in reported health anxiety is now significant enough to have a new name.

“Cyberchondria” was first coined in a 2001 BBC News report and later validated in a 2003 article. And, says Aiken, a groundbreaking study in 2009 by Ryen White and Eric Horvitz, two pioneering research scientists at Microsoft, used data analytics to establish the relationship between online medical searches and the heightened incidence of health-related anxiety.

In a study of 40m searches – 10,000 of them manually analysed – they were able to demonstrate that searchers progressed from reading about normal complaints to looking at rare and serious medical conditions. In a companion survey of 515 individuals, nine out of 10 respondents said they’d conducted an online search for symptoms of a common medical condition that led them to review a more serious illness. One in five said this happened to them “frequently.”

“The web has the potential to increase anxieties of people who have little or no medical training,” White and Horvitz concluded, “especially when web search is employed as a diagnostic procedure.” Now, seven years later, even Google admits that “health content on the web can be difficult to navigate, and tends to lead people from mild symptoms to scary and unlikely conditions, which can cause unnecessary anxiety and stress.”

Aiken writes: “Admitting there’s a problem is one step. But fixing it is another. I have been involved in a dozen different research silos in the past decade – studying everything from cyberchondria to cybercrime – and the one thing I have observed over and over again is that human behaviour is often amplified and accelerated online. We see examples of this escalation in everything from trolling to cyberbullying, cyberstalking to online sex offending. I believe this is caused by an almost predictable mathematical multiplier: the cyber effect, which is the E = mc2 of this century.

“Anxiety means more doctor visits and crowded waiting rooms—but it also means a rise in risk. The more often you visit a doctor and present with plausible symptoms, the more intrusive procedures you are likely to face in order to investigate the likely (or unlikely) cause.”

Aiken writes: “That risk is significant. The third-most-common cause of death in the US, after heart disease and cancer, is ‘iatrogenic effect,’ a blanket term that can refer to an unfortunate drug side effect or interaction, a surgical instrument malfunction, physician negligence, medical error, pathogens in the treatment room, or simple bad luck. According to activist and toxicologist John James, who lost his son due to what he believes was a careless medical mistake in a Texas hospital in 2002, there has been a four-fold increase in iatrogenic deaths in the US between 1999 and 2013. This would appear to follow the growth of the internet.

Aiken says: “The internet offers so many advantages, but these pluses are increasingly offset by serious problems. Here are some solutions: creating safer and more-intelligent search protocols for medical queries, so that access to health information doesn’t result in unnecessary anxiety – and consequences; rethinking media coverage and TV commercials, which can also fuel health anxiety and send people rushing online to self-diagnose; and reforming medical malpractice protocols to discourage unnecessary testing and exploratory investigative procedures.”

Aitken writes: “It’s time for medical ethics to migrate online. The question is: Can Dr Google abide by one of the main tenets of the Hippocratic oath, which doctors swear to at the beginning of their medical practice? Primum non nocere – ‘First, do no harm.’”

Africa's enigma: Why has the pandemic been less severe here?