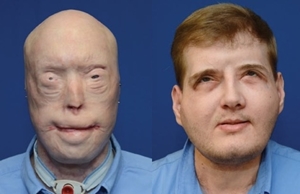 Before surgery and one year later

The severely burned firefighter who underwent the most extensive face transplant ever performed is thriving one year after his historic surgery, according to his medical team at New York University Langone Medical Centre. Unprecedented among those who have had the procedure, his body has not once attempted to reject his new face.

Patrick Hardison, 42, who was injured in the line of duty in 2001, has had several follow-up procedures since his transplant, principally to adjust his new eyelids and lips, and to remove the feeding tube from his abdomen and the breathing tube from his trachea. As a result, he has been able to return to activities he loves but had been unable to partake in since his accident, including driving and swimming.

“The surgery has truly given me back my life,” says Hardison. “I go about my day just like everyone else. It’s allowed me to do things with my family that I had not been able to do. I can’t tell you what a sense of freedom it is to even drive my kids to school. We recently went on a family vacation to Disney World, and I swam in the pool with them – something I hadn’t done in 15 years.”

Dr Eduardo D Rodriguez, the chair of the Hansjrg Wyss department of plastic surgery at NYU Langone and the surgeon who led the team of over 100 medical professionals that performed Hardison's transplant, points to three significant milestones in his recovery: The absence of a rejection episode; the normal function of Hardison's new eyelids; and the execution and achievement of the most extensive soft tissue clinical face transplant to date.

"We are amazed at Pat's recovery, which has surpassed all of our expectations," Rodriguez says. "Most significant is the lack of a rejection episode. We believe this has much to do with the methodical approach we took in the matching process to ensure that Patrick's donor provided the most favourable match. Doing so also has allowed us to reduce the levels of certain medications that Pat takes to prevent rejection."

Rodriguez also concludes that including selective facial bone structure in addition to the chin of the donor provided natural bone marrow stem cells to help the transplanted face thrive following the surgery, and provided the necessary positional support for the facial soft tissues.

The successful transplant of the donor's eyelids and blinking mechanisms also has been particularly important, as Hardison was in danger of losing his sight and had been unable to perform independent daily tasks. Blinking enables the body to appropriately hydrate and clean the eyes to prevent infection and preserve vision.

Now with fully functional eyelids, Rodriguez sees this particular aspect of Hardison's surgery as a "game changer" for the field of face transplantation. "Being able to give Pat this level of independence is a primary reason why we undertook this surgery," Rodriguez says.

Earlier this year, Rodriguez and his team published a series of articles in which they detailed many aspects of the case, including the importance of eyelid preservation and enhancement in facial transplantation. The series of manuscripts also details a methodical approach for face transplant teams considering patients with severely disfiguring full face and scalp burns.

Hardison's extraordinary recovery – and lack of a rejection episode – also has allowed his medical team to move forward with the removal of his abdominal feeding tube and the breathing tube in his trachea much sooner in his recovery. In addition to removing the tubes, Rodriguez also has performed revisions to Hardison's forehead, eyes, lips, chin, and ears, now that the majority of the swelling has subsided

"Pat has been incredibly compliant with his post-surgical regimen, and that has allowed us to expedite his surgical schedule," Rodriguez notes. "He is extremely committed to daily exercise, taking his medications and meeting with his physicians regularly. All of this has put him way ahead of schedule in terms of getting to the optimal level of recovery and appearance."

"We have entered a new era in transplant surgery," Rodriguez points out. "The work being done, not only in face transplantation, but also in areas like hand, uterine and penile transplantation, is pushing the boundaries of medicine and surgery and opening up new avenues to restore the lives of people like Patrick. It's a very exciting time."

Meanwhile, in a study led by Professor Laurent Lantieri,  university professor and chief of plastic reconstructive surgery at Hôpital Européen Georges Pompido and published in The Lancet, French researchers have looked at the success rate of facial transplants.

Abstract
Background: More than 30 face transplantations have been done worldwide since 2005 but no documented long-term follow-up has been reported in the literature. We aimed to answer remaining question about the long-term risks and benefits of face transplant.
Methods: In this single-centre, prospective, open study, we assessed 20 patients presenting with facial defects. Ten patients were selected, and, after three were secondarily excluded, seven were transplanted: two with neurofibromatosis 1, one with a burn, and four with self-inflicted facial gunshot injuries. We report the long-term outcomes of six face allotransplant recipients at an average of 6 years (range 3•4-9 years) after the transplantation. All admissions to hospital except for planned revisions and immunosuppressive follow-up therapy were reported as adverse events (safety endpoint). Predefined immunological, metabolic, surgical, and social integration endpoints were collected prospectively. Patients underwent quantitative health-related quality of life assessments through Short Form 36 health questionnaires.
Findings: Two of seven patients died: one at 65 days due to transplant destruction with concomitant pseudomonas infection and the second at 3•4 years after transplantation by suicide. The six patients alive at long-term follow-up presented with functional transplants. Safety endpoints were related to infection in the first month, acute rejection from 1 day to 7 years after transplantation, or side-effects of immunosuppressive therapy. Recurrent rejection episodes justified maintenance therapy with high-dose steroids at high levels in all patients at last follow-up, yet none of the patients developed diabetes. Three patients were found to have hypertension with one requiring therapy. All patients had a noticeable reduction in glomerular filtration rate. All recipients and their families accepted their transplant. Improvements in social integration and quality of life were highly variable among the patients and depended on baseline levels and psychiatric comorbidities.
Interpretation: These long-term results show the crucial effect of patients' social support and pre-existing psychiatric conditions on the risk-benefit ratio of facial transplantation. Careful preoperative patient selection and long-term postoperative follow-up programmes under strict institutional review board controls should be used for any future grafts of this type.