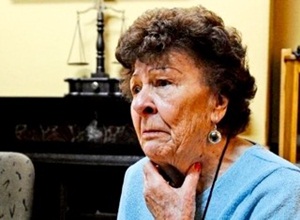 An elderly woman whose life was completely changed after being given formalin to drink instead of water, by an anaesthetist at Grey's Hospital Pietermaritzburg, has won her hospital malpractice suit after an eight-year struggle. But, writes Legalbrief columnist Carmel Rickard, this is not just a story of medical mistakes but of 'alarmingly poor' conduct on the part of the KwaZulu-Natal MEC for Health and his legal team.

In her regular A Matter of Justice column, titled, Lawyers, lies … and an MEC in denial mode, Rickard writes: that "it has to be one of the most bizarre stories of South African hospital malpractice" –  a healthy, vital 79-year-old grandmother of 79 years goes into hospital for a knee replacement but when she comes round from the operation a doctor gives her formalin to drink instead of water.

Isabella Smith, "whose life has been completely changed after drinking the corrosive, poisonous liquid" is now a recluse, unable to eat normally and suffering other complications from the after-effects of ingesting formalin, Smith was awarded a total of R890 000 in damages and future medical costs by the High Court Pietermaritzburg.

"But a close reading of the judgment shows this isn’t just a story of medical mistakes, writes Rickard. Judge Graham Lopes indicates that the legal conduct of the matter on behalf of the KwaZulu-Natal MEC for health was also alarmingly poor: ‘The history of the conduct of this matter is as unfortunate as are the facts of the case’, he said.

"Repeated and unnecessary" delays caused by KZN Health meant that Smith has had to wait six years for the case to be finalised, manage as best she could to pay the medical costs associated with her condition. And almost until the last moment the MEC denied Smith’s allegations that she had been given formalin to drink.

Judge Lopes noted at various points in the judgment that submissions by MEC’s legal team about their handling of the matter are ‘simply untrue’, that statements about the way matters proceeded during the pre-trial phase are ‘not a true representation of the facts’ or that explanations or statements in affidavits put up on behalf of the provincial health department are ‘disingenuous’.

"Smith was admitted to Grey’s Hospital in Pietermaritzburg in May 2010 for a left knee replacement. After the operation she was lying in the recovery room when she asked an attending doctor for something to drink because she was very thirsty.

"The anaesthetist who actually made the mistake and gave Smith the formalin to drink, testified at the hearing. She has not been named, however. She said she has been working as a specialist anaesthetist since 2013 and was a registrar at Greys in 2010 when Smith came in for surgery. The doctor said she administered the anaesthetic to Smith for her knee replacement. After the operation she was taken to the recovery room where she complained of nausea and was given an anti-emetic intravenously. Smith repeated that she felt nauseous and said a glass of water would settle her. A nurse brought some water but the anaesthetist threw it out because ‘it was not needed’. When Smith persisted in asking for water the doctor went to get it for her from a room next to the recovery room where there was a sink, a tap and a liquid canister with what looked like water. She poured this clear liquid into a cup and took it back for Smith to drink.

"There’s a dispute about what happened next: Smith spoke of gagging, of her throat burning and said she shouted that they were trying to kill her. According to the doctor, however, Smith said it tasted funny, so the doctor went back to look at the canister. This time she noticed the formalin label and informed both Smith and the staff what had happened.

"There are two main problems with this: First, the court found the doctor’s evidence, including the fact that Smith was ‘very calm’ throughout, ‘did not accord with the probabilities’ or was not corroborated by the attending staff. Second – and this goes directly to the legal handling of the matter criticised by the judge – right up to 8 June this year, two court days before the trial started, the authorities denied that formalin was given to Smith, thus making Smith have to prove this vital element of her case.

"The judge noted how, once she launched her claim, the MEC’s legal team repeatedly failed to meet deadlines set by the court and to heed other instructions by the judge managing the pre-trial conference.

"Lopes also pointed to problems around discovery of the documents – the stage where both sides must produce and exchange all relevant documentation. In December 2014, the head of the state’s legal team appeared in court and recorded that the MEC ‘would not discover because there were no documents to discover’. Since then records from Greys Hospital, repeatedly requested by Smith’s lawyers, were said to be lost, to be not available, or not to exist. Then, a month before the scheduled hearing of the dispute hospital records ‘suddenly surfaced’, with no explanation ever being given for why they were not produced earlier.

"During the trial new state lawyers applied to admit further documents, but the judge was scathing in his refusal: ‘It was simply unacceptable that the state could conduct litigation in this manner. Mrs Smith is currently 85 years of age and was injured in May of 2010. Six years had elapsed during which the (MEC) had every opportunity properly to prepare its case. That it did not do so demonstrates that the (MEC’s) case has been recklessly prepared.’

T"he MEC’s lawyers made a similar application at the start of the second and third days of the trial, without success: the judge called some of the argument on which the application was based ‘simply untrue’. ‘The conduct of the (state’s) legal representatives in not properly preparing the case is inexcusable,’ he added.

"In his order, the judge said it would be appropriate to award costs at a punitive level against the MEC. ‘I do so as a measure of displeasure at the (MEC’s) conduct and the conduct of his/her attorneys in defending the action in the manner which they did.’

"Given the new mood among some judges to hold public servants personally accountable for wasting money fighting unwinnable cases, the MEC and the lawyers probably got off lightly. However, one newspaper is quoting a health department official as saying ‘We will study the judgment very carefully and are of a mind to take it on appeal’. If that’s so, one can only hope that they consider whether to appeal with as much care as they are considering the judgment – for who knows what a higher court might decide when it comes to costs, especially given the factual findings this court has made about the conduct of the state and its lawyers?"