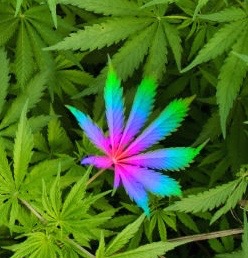 The first long-term study tracking the brain responses of young marijuana users found a blunted response to reward stimuli over time, reports the University of Michigan.

Most people would get a little ‘rush’ out of the idea that they’re about to win some money. In fact, if you could look into their brain at that very moment, you’d see lots of activity in the part of the brain that responds to rewards. But for people who use marijuana, that rush just isn’t as big – and gets smaller over time, the study finds. And that dampened, blunted response may actually open marijuana users up to more risk of becoming addicted to that drug or others.

The new results come from the first long-term study of young marijuana users that tracked brain responses to rewards over time. It was performed at the University of Michigan Medical School and shows measurable changes in the brain’s reward system with marijuana use – even when other factors like alcohol use and cigarette smoking were taken into account. “What we saw was that over time, marijuana use was associated with a lower response to a monetary reward,” said senior author and U-M neuroscientist Mary Heitzeg. “This means that something that would be rewarding to most people was no longer rewarding to them, suggesting but not proving that their reward system has been ‘hijacked’ by the drug, and that they need the drug to feel reward – or that their emotional response has been dampened.”

The study involved 108 people in their early 20s – the prime age for marijuana use. All were taking part in a larger study of substance use, and all had brain scans at three points over four years. Three-quarters were men, and nearly all were white.

While their brain was being scanned in a functional MRI scanner, they played a game that asked them to click a button when they saw a target on a screen in front of them. Before each round, they were told they might win 20c, or $5 – or that they might lose that amount or have no reward or loss.

The researchers were most interested at what happened in the reward centres of the volunteers’ brains – the area called the nucleus accumbens. And the moment they cared most about was that moment of anticipation, when the volunteers knew they might win some money, and were anticipating performing the simple task that it would take to win.

In that moment of anticipating a reward, the cells of the nucleus accumbens usually swing into action, pumping out a ‘pleasure chemical’ called dopamine. The bigger the response, the more pleasure or thrill a person feels – and the more likely they’ll be to repeat the behaviour later. But the more marijuana use a volunteer reported, the smaller the response in their nucleus accumbens over time, the researchers found.

While the researchers did not look at the volunteers’ responses to marijuana-related cues, other research has shown that the brains of people who use a high-inducing drug repeatedly often respond more strongly when they’re shown cues related to that drug. The increased response means the drug has become associated in their brains with positive, rewarding feelings. And that can make it harder to stop seeking out the drug and using it.

If this is true with marijuana users, “it may be that the brain can drive marijuana use, and that the use of marijuana can also affect the brain. We’re still unable to disentangle the cause and effect in the brain’s reward system, but studies like this can help that understanding,” said first author Meghan Martz, U-M doctoral student in developmental psychology,

Regardless, the new findings show that there is change in the reward system over time with marijuana use. The new data on response to potentially winning money may also be further evidence that long-term marijuana use dampens a person’s emotional response – something scientists call anhedonia.

“We are all born with an innate drive to engage in behaviours that feel rewarding and give us pleasure,” said co-author Elisa Trucco, psychologist at the Centre for Children and Families at Florida International University. “We now have convincing evidence that regular marijuana use impacts the brain’s natural response to these rewards. In the long run, this is likely to put these individuals at risk for addiction.”

Marijuana’s reputation as a “safe” drug, and one that an increasing number of states are legalising for small-scale recreational use, means that many young people are trying it – as many as a third of college-age people report using it in the past year.

But Heitzeg says that her team’s findings – and work by other addiction researchers – has shown that it can cause problems with emotional functioning, academic problems and even structural brain changes. And, the earlier in life someone tries marijuana, the faster their transition to becoming dependent on the drug, or other substances.
“Some people may believe that marijuana is not addictive or that it’s ‘better’ than other drugs that can cause dependence,” Heitzeg said. “But this study provides evidence that it’s affecting the brain in a way that may make it more difficult to stop using it. It changes your brain in a way that may change your behaviour, and where you get your sense of reward from.”

She is among the neuroscientists and psychologists leading a nationwide study called ABCD, for Adolescent Brain Cognitive Development. That study will track thousands of today’s pre-teens nationwide over 10 years, looking at many aspects of their health and functioning, including brain development via brain scans. Since some of the teens in the study are likely to use marijuana, the study will provide a better chance of seeing what happens over time.

Abstract
Importance: Marijuana use may alter ventral striatal response to reward, which might heighten susceptibility to substance use disorder. Longitudinal research is needed to determine the effects of marijuana use on neural function involved in reward response.
Objective: To determine whether marijuana use among young adults prospectively affects nucleus accumbens (NAcc) activation during reward anticipation.
Design, Setting, and Participants: One hundred eight young adults were recruited from the Michigan Longitudinal Study, an ongoing study of youth at high risk for substance use disorder and a contrast sample of control families. Participants underwent 3 consecutive functional magnetic resonance imaging scans at approximate ages of 20 (time 1), 22 (time 2), and 24 (time 3) years. Self-report data on marijuana and other drug use occasions were collected annually since age 11 years.
Main Outcomes and Measures: Cross-lagged models were used to test the association of marijuana use with neural response in the NAcc to reward anticipation during a monetary incentive delay task controlling for sex, age, other substance use, and family history of substance use disorder.
Results: Of 108 participants, 39 (36.1%) were female and mean (SD) age at baseline was 20.1 (1.4) years. Greater marijuana use was associated with later blunted activation in the NAcc during reward anticipation (time 1 to time 2: β = −0.26, P = .04; time 2 to time 3: β = −0.25, P = .01). When the cross-lagged model was tested with the inclusion of previous and concurrent cigarette use, the effect of marijuana use from time 2 to time 3 remained significant (β = −0.29; P = .005) and the effect of cigarette use was nonsignificant.
Conclusions and Relevance: The findings of this study indicate that marijuana use is associated with decreased neural response in the NAcc during the anticipation of nondrug rewards. Over time, marijuana use may alter anticipatory reward processing in the NAcc, which may increase the risk for continued drug use and later addiction.