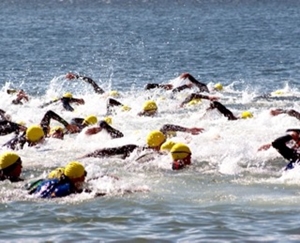 Heart abnormalities linked to immersion pulmonary oedema (IPO) may be a significant factor in 42 triathletes deaths during the swim portion, according to a seven-year Duke Health study.

The findings are based on an analysis of autopsy reports of people who died in the US and Canada between 2008 and 2015 while participating in triathlons. Triathlon competitions involve consecutive races of swimming, bicycling and running. Study investigators identified 58 deaths during the time period, with 42 of those occurring during the swim. Researchers examined autopsy reports on 23 of the 42 deaths.

Dr Richard Moon, the study’s first author and a professor of anaesthesiology and medicine at the Duke University School of Medicine, said he and co-investigators reviewed the autopsy reports to identify whether conditions were present that may have made the athletes susceptible to immersion pulmonary oedema (IPE, in the study abbreviated as IPO based on the Greek spelling of oedema).

IPO, also known as swimming-induced pulmonary oedema, occurs when the lungs suddenly fill with body fluids during activities in cold water, such as swimming and diving. IPEO can lead to difficulty breathing, wheezing and confusion, which can be serious and even fatal.

While IPO can occur in healthy individuals, Moon said its onset is often seen in those with left ventricular hypertrophy (LVH), a condition where the heart muscle becomes thickened or heart mass increases. LVH typically occurs in people with high blood pressure and is a marker for susceptibility to IPO. A mildly enlarged heart – commonly referred to as athlete’s heart – can also develop among endurance athletes, although athlete’s heart is not believed to predispose to swimming-induced pulmonary oedema.

Moon and co-researchers compared figures from the autopsy reports in the current study to data from previous studies, including one published in 1997 led by Dr Pamela Douglas, professor of medicine at Duke. Douglas’ investigation looked at the prevalence of LVH in 225 athletes who completed a triathlon in Hawaii from 1985-95.

“Among the autopsy reports of the deceased triathletes, we found a much higher prevalence of LVH than the healthy athletes in Douglas’ study,” Moon said. “The degree of enlargement was also much greater in the triathletes who died.”

Specifically, the 16 triathletes who died from unclear causes had higher measures of heart wall thickness. The autopsy reports showed abnormal cardiac septal thickness in 67% of the deceased athletes and abnormal posterior wall thickness in 50%. In the Douglas study, it was 1% and 0.5%, respectively.

While it cannot be definitively concluded that IPO was the cause of the triathlete deaths during swimming, Moon said the autopsy reports demonstrate a plausible link. He recommended that potential triathletes and their health-care providers be aware of the known connection between LVH and the potential risk of immersion pulmonary oedema.

“The message is that if people have untreated hypertension or they’re known to have ventricular hypertrophy, they need to get evaluated and treated before they embark on this sport,” Moon said.

Abstract
Background/aim: To address the question as to whether immersion pulmonary oedema (IPO) may be a common cause of death in triathlons, markers of swimming-induced pulmonary oedema (SIPO) susceptibility were sought in triathletes' postmortem examinations.
Methods: Deaths while training for or during triathlon events in the USA and Canada from October 2008 to November 2015 were identified, and postmortem reports requested. We assessed obvious causes of death; the prevalence of left ventricular hypertrophy (LVH); comparison with healthy triathletes.
Results: We identified 58 deaths during the time period of the review, 42 (72.4%) of which occurred during a swim. Of these, 23 postmortem reports were obtained. Five individuals had significant (≥70%) coronary artery narrowing; one each had coronary stents; retroperitoneal haemorrhage; or aortic dissection. 9 of 20 (45%) with reported heart mass exceeded 95th centile values. LV free wall and septal thickness were reported in 14 and 9 cases, respectively; of these, 6 (42.9%) and 4 (44.4%) cases exceeded normal values. 6 of 15 individuals (40%) without an obvious cause of death had excessive heart mass. The proportion of individuals with LVH exceeded the prevalence in the general triathlete population.
Conclusions: LVH—a marker of SIPO susceptibility—was present in a greater than the expected proportion of triathletes who died during the swim portion. We propose that IPO may be a significant aetiology of death during the swimming phase in triathletes. The importance of testing for LVH in triathletes as a predictor of adverse outcomes should be explored further.