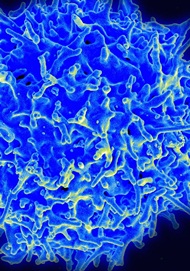 Immunotherapy is the most exciting development in cancer treatment in years, beginning to take off at a time when much cancer drug research seems to be hitting a brick wall. More and more of the orthodox chemotherapy drugs have very small effects, buying people with the advanced disease a few months or even just weeks of life, reports The Guardian.

But the scientists working on immunotherapy have set out in an entirely different direction, tricking the body’s own defences into fighting the enemy cancer within. For a long time, this has been an aspiration. The concept dates back to the 1970s and for decades the big pharmaceutical companies showed little interest. Other drugs looked like much more certain money-earners. But now there is real evidence that immunotherapy can sometimes halt terminal cancers in their tracks and big pharma is joining the bandwagon with a vengeance.

In Chicago, at the American Society for Clinical Oncology (Asco) 2015 annual meeting, where so many promising cancer drugs have been announced in the past – not always in the long term fulfilling the high hopes – experts are saying that the results of a trial involving a combination of two new immunotherapy drugs for melanoma (skin cancer) patients are spectacular.

Half the patients in the British trial, considered terminally ill and with little time left, responded to ipilimumab, a drug licensed four years ago, combined with the new and as-yet-unlicensed drug nivolumab. On its own, ipilimumab works for around a fifth of patients. The combination of the two shrank the tumours of 58% of patients. There is hope they may disappear altogether. The trial of 945 patients was led by the Royal Marsden Hospital in London.

Excitement over new cancer drugs is a dangerous thing, the report says. There have been melanoma drugs before that were greeted as miracle cures. These “targeted drugs”, the BRAF inhibitors, caused tumours to vanish completely. There was euphoria at cancer conferences. But within a few months, the disease came back with a vengeance and killed.

But the enthusiasm for immunotherapy may be better placed because this is a whole new way of tackling cancer. Scientists have long puzzled over the failure of the body’s own defensive immune system to attack cancer cells in the same way that it will fight a cold virus. They have discovered that cancer – just like the human immunodeficiency virus (HIV) that causes Aids – can hide from the T-cells that seek out and kill invaders. Cancer Research UK, which has been funding some of the research, says the cancer cells have developed a sort of “secret handshake” which persuades the T-cells not to attack.

In 1992, Japanese scientists discovered a molecule on the T-cells that was part of this secret handshake. They called it “programmed death 1” or PD1 and set out trying to disrupt it. The new drugs are the long-term result. They appear to work – at least for now – in advanced melanoma, which has a high death rate. Unlike other drugs, they are likely to work in a whole range of other cancers, too.

There are issues, as always. One is the likelihood of serious side effects. Dr Alan Worsley, from Cancer Research UK, said: “This research suggests that we could give a powerful one-two punch against advanced melanoma by combining immunotherapy treatments. Together these drugs could release the brakes on the immune system while blocking cancer’s ability to hide from it. But combining these treatments also increases the likelihood of potentially quite severe side effects. Identifying which patients are most likely to benefit will be key to bringing our best weapons to bear against the disease.”

The other big question will be how long the drugs will keep the cancers at bay. Most drugs for advanced cancers have delayed progression of the disease but not cured it. The immunotherapy drugs have not been used for long enough to be sure whether they will have a big impact on survival. But the big hope is that immunotherapy may be able to teach the body’s immune system to recognise and destroy cancer cells – and keep doing it so that the cancer is banished for good.

Roy Herbst , chief of medical oncology at Yale Cancer Centre, described the string of results as “spectacular”. “I think it’s huge,” he said in a report in The Daily Telegraph. “I think we are seeing a paradigm shift in the way oncology is being treated.” “I’m seeing this work in almost every cancer,” added Herbst, who said the results suggested the therapy worked best on the cancers that were hardest to treat. “The potential for long-term survival, effective cure, is definitely there,” he said.

Peter Johnson, professor of medical oncology, from Cancer Research UK, said the therapies – which work by “re-educating” the immune system – are one of the greatest breakthroughs in cancer treatment in four decades. “The evidence emerging from clinical trials suggests that we are at the beginning of a whole new era for cancer treatments,” he said.