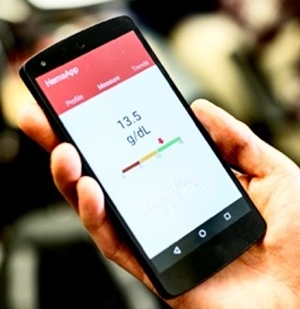 The University of Washington has developed HemaApp, using a smartphone camera to estimate haemoglobin concentrations and screen for anaemia. In an initial trial and with only one smartphone modification, HemaApp performed as well as the Masimo Pronto, the more expensive US Food and Drug Administration-approved medical device that measures haemoglobin via a finger clip sensor.

In the developing world, anaemia – a blood condition exacerbated by malnutrition or parasitic disease – is a staggeringly common health problem that often goes undiagnosed. And in hospitals everywhere, children and adults with leukaemia and other disorders require frequent blood draws to determine if they need blood transfusions.

In both cases, doctors are interested in measuring haemoglobin, a protein found in red blood cells. To obtain this basic measurement, health care providers either have to draw blood with a needle or intravenous line, or spend hundreds to thousands of dollars on a specialised machine that measures haemoglobin non-invasively.

Now, electrical engineers and computer scientists from the University of Washington have developed HemaApp, which uses a smartphone camera to estimate haemoglobin concentrations and screen for anaemia. The new technology is described in a paper that has received a "Best Paper" award from the Association for Computing Machinery's 2016 International Joint Conference on Pervasive and Ubiquitous Computing (UbiComp 2016) and will be presented 15 September at the conference in Germany.

In an initial trial of 31 patients, and with only one smartphone modification, HemaApp performed as well as the Masimo Pronto, the more expensive US Food and Drug Administration-approved medical device that non-invasively measures haemoglobin by clipping a sensor onto a person's finger.

"In developing countries, community health workers have so much specialised equipment to monitor different conditions that they literally have whole bags full of devices," said lead author and UW electrical engineering doctoral student Edward Wang. "We are trying to make these screening tools work on one ubiquitous platform – a smartphone."

By shining light from the phone's camera flash through the patient's finger, HemaApp analyses the colour of his or her blood to estimate haemoglobin concentrations. The researchers tested the app under three different scenarios: using the smartphone camera's flash alone, in combination with a common incandescent lightbulb, and with a low-cost LED lighting attachment.

The additional illumination sources tap into other parts of the electromagnetic spectrum that have useful absorption properties but that aren't currently found on all smartphone cameras.

"New phones are beginning to have more advanced infrared and multi-color LED capabilities," said senior author Shwetak Patel, the Washington Research Foundation entrepreneurship endowed professor in computer science & engineering and electrical engineering. "But what we found is that even if your phone doesn't have all that, you can put your finger near an external light source like a common lightbulb and boost the accuracy rates."

In the initial trials, HemaApp's haemoglobin measurements using a smartphone camera alone had a 69% correlation to a patient's Complete Blood Count (CBC) test, a 74% correlation when used under a common incandescent light bulb and an 82% correlation using a small circle of LED lights that can snap onto the phone.

For comparison, the Masimo Pronto's measurements had an 81% correlation to the blood test.

The mobile app is not intended to replace blood tests, which remain the most accurate way to measure haemoglobin. But the early test results, from patients that ranged in age from 6 to 77 years old, suggest HemaApp can be an effective and affordable initial screening tool to determine whether further blood testing is warranted. When used to screen for anaemia, HemaApp correctly identified cases of low haemoglobin levels 79% of the time using just the phone camera, and 86% of the time when aided with some light sources.

"Anaemia is one of the most common problems affecting adults and children worldwide," said co-author Doug Hawkins, a UW Medicine, Seattle Children’s Hospital and Seattle Cancer Care Alliance paediatric cancer specialist. "The ability to screen quickly with a smartphone-based test could be a huge improvement to delivering care in limited-resource environments."

Co-author Terry Gernsheimer, a UW Medicine and Seattle Cancer Care Alliance haematologist and transfusion medicine specialist, said her staff frequently has to draw blood from leukaemia or surgical patients solely to measure haemoglobin levels and determine if they need transfusions.

"Every time we draw blood, we are invading the patient in some way, shape or form. If we don't already have a line in, we are sticking a needle into their arm, which involves discomfort and infection risk, albeit low," she said. "It would be really nice to not have to perform a procedure every time we want to answer that question."

HemaApp draws on previous work from the UW's UbiComp Lab, which also developed Bilicam, a mobile app that uses a smartphone's camera and flash to infer the amount of bilirubin in the blood for newborn jaundice. Bilicam just completed a nationwide clinical trial of 500 newborns.

HemaApp bombards a patient's finger with different wavelengths of light and infrared energy and creates a series of videos. By analysing how colours are absorbed and reflected across those wavelengths, it can detect concentrations of haemoglobin and other blood components like plasma.

To ensure that it works on different skin tones and body masses, the team developed processing algorithms that use the patient's pulse to distinguish between the properties of the patient's blood and the physical characteristics of his or her finger.

Next research steps include wider national and international testing of HemaApp, collecting more data to improve accuracy rates, and using smartphones to try to detect abnormal haemoglobin properties that could help screen for sickle cell disease and other blood disorders.

"We're just starting to scratch the surface here," said Patel. "There's a lot that we want to tackle in using phones for non-invasively screening disease."

The research was funded by the endowment of the Washington Research Foundation.