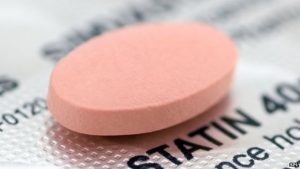 A 14-year study of nearly 1m patients found that a high cholesterol diagnosis was associated with lower risk of death in the UK’s four most common cancers — lung, breast, prostate and bowel. It’s a ‘very strong possibility’ that statins are producing this effect, say researchers.

“The discovery of a link between obesity and high cholesterol as risk factors for cancer has been exciting for researchers and the public,” said lead author Dr Paul Carter from the ACALM Study Unit at Aston Medical School, Aston University in Birmingham, UK. “Even trendier is the idea that if high cholesterol can cause cancer, then cholesterol lowering interventions such as statins could reduce this risk.”

The current study investigated the association between high cholesterol and mortality in patients with lung, breast, prostate and bowel cancer, the four most common cancers in the UK. Patients admitted to UK hospitals with these cancers between 1 January 2000 and 31 March 2013 were recruited from the Algorithm for Comorbidities, Associations, Length of stay and Mortality (ACALM) clinical database, which also had information on co-existing conditions such as high cholesterol. Mortality data was obtained from the UK Office for National Statistics.

Carter said: “Our research suggests that there’s something about having a high cholesterol diagnosis that improves survival and the extent to which it did that was quite striking in the four cancers studied. Based on previous research we think there’s a very strong possibility that statins are producing this effect.”

He continued: “Because we saw the association amongst all four cancers we studied, we think this effect is caused by medications used for high cholesterol such as statins. These findings are likely to be seen in other cancers as well but this is only speculation and would need to be confirmed by studies in different types of cancer.”

Dr Rahul Potluri, senior author and founder of the ACALM Study Unit, said: “Statins have some of the best mortality evidence amongst all cardiovascular medications and statin use in patients with a diagnosis of high cholesterol is possibly the main reason that this diagnosis appears to be protective against death in patients with lung, breast, prostate and bowel cancer. Other cardiovascular medications may also be protective and explain the varying levels of risk reduction in the four cancer types. For example, prostate cancer is associated with heart disease and these patients tend to take ACE inhibitors and beta-blockers.”

He added: “The results of this study strengthen the argument for a clinical trial evaluating the possible protective effect of statins and other routinely used cardiovascular medications such as aspirin, blood pressure medications, beta-blockers and ACE inhibitors in patients with cancer. Whether it is statins and/or other cardiovascular drugs in combination that have an effect on mortality remains to be seen.”

Potluri concluded: “Patients with cancer who are at high risk or have established cardiovascular disease should be given statins as per current guidelines. I don’t think at the moment we can give statins for cancer per se. But this could change if there was a positive result in the clinical trial.”

Abstract
Introduction: Hyperlipidaemia is a well-established cardiovascular risk factor but the effect of hyperlipidaemia and treatment with cholesterol-lowering drugs on cancer remain equivocal. We aimed to investigate the impact of comorbid hyperlipidaemia on mortality amongst patients with the four most prevalent cancer types in the United Kingdom (Lung, Breast, Prostate and Bowel). We did this using a large database of patients admitted with comorbid hyperlipidaemia to hospitals in the UK between 2000-2013.
Methods: Anonymous information on patients with a primary diagnosis of lung, breast, prostate and bowel cancers were obtained from hospitals in the UK between 1st January 2000 and 31st March 2013. This data was analysed according to the ACALM (Algorithm for Comorbidities, Associations, Length of stay and Mortality) study protocol. ICD-10 and OPCS-4 codes were used to trace patients coded for cancer, patient demographics, prevalence of hyperlipidaemia and mortality data. The impact of hyperlipidaemia on mortality in cancer patients was analysed by cox regression adjusted for age, gender and ethnicity.
Results: 929552 patients were admitted during the study period. Of these 7997 had lung cancer, 5481 had breast cancer, 4629 had prostate cancer, and 4570 had bowel cancer. Comorbid diagnoses of hyperlipidaemia significantly reduced mortality amongst patients with all four cancer types studied. Cox regression analyses accounting for differences in age, gender and ethnicity showed that hyperlipidaemia was associated with a significantly reduced mortality rate in lung cancer (OR 0.78, 95% CI 0.70-0.87 ), breast cancer (OR 0.57, 95% CI 0.43-0.77), prostate cancer (OR 0.53 , 95% CI 0.50-0.79) and bowel cancer (OR 0.70, 95% CI 0.58-0.84).
Conclusion: We demonstrate for the first time that comorbid hyperlipidaemia has a highly protective effect on mortality amongst patients with the four most prevalent cancers in the UK. The underlying reasons are yet to be determined but treatment with statins may contribute. This potentially beneficial effect of lipid-lowering medications amongst cancer patients should be further investigated.