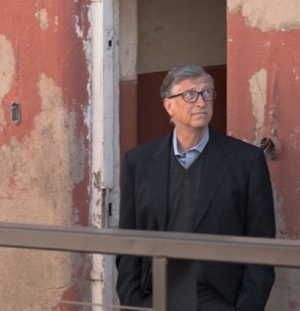 US philanthropist Bill Gates believes that one of the answers to the world fight against poverty, hunger, and diseases is for the wealthy to be immersed in the life of the poor.  During a trip to South Africa, he for the first time used virtual reality technology to try to do exactly that.

Bill Gates writes in a blog on the Gates Notes site: “If you could shuffle all of the homes in the world like a deck of cards so that people in wealthy countries lived side by side with people from poor countries, it would transform the world’s fight against poverty, hunger, and disease. It would be impossible for people to look away, impossible for them not to help.

“I was naïve about the deep poverty in the world until I took my first trip to Africa with Melinda in 1993. Seeing the disparities with our own eyes made all the difference and inspired us to start our foundation.

“Since then, I’ve continued to travel regularly to Africa, India, and other parts of the developing world. I always return from my trips humbled and inspired. My one disappointment is that I wish everyone could have seen what I did. I have no doubt it would help more people become aware of the challenges the world’s poorest people face. It would also leave them as optimistic as I am about the incredible progress the world is making in health and development.

“During my trip to South Africa in July, I tried something new that I hope will allow people to experience what I have. I had highlights of my visit recorded in virtual reality. It’s still an emerging technology but what excites me about it is that it allows viewers to immerse themselves in another world. You can look up and down. Turn right or left. Listen to sounds all around you. I used to think there was no substitute to being there and seeing things for yourself. But virtual reality is a close second. It fulfills my dream of allowing people to see what I’m seeing and, perhaps, feel what I’m feeling, too.”

Gates said: “This is a virtual reality film. It will look best if you watch it on a mobile phone using a VR headset. Start by e-mailing this link to your phone. (Learn more about viewing VR on the Gates Notes.) You can also watch the film as 360° video on your browser—just click the arrow below.

In this video, you will hear the stories of young women living with HIV. Sit beside me as I drive from the leafy suburbs of Johannesburg to the dusty township of Soweto. Feel what it’s like to be in the centre of a stomping gumboot dancing troupe. And be inspired by the power of South Africa’s youth, who will drive the next generation of innovations to create a future free of Aids.

“Pulling on a pair of virtual reality goggles can, I admit, feel like you’re blocking out the world. But I hope you’ll find that they’re an amazing tool to draw you closer to other people. Instead of separating yourself from the world, I think you’ll discover you’ve deepened your connection to it.

“If you want to know more about my trip to South Africa, you can read about my visit here and here. I also encourage you to learn more about The Global Fund, which has helped provide lifesaving treatment to millions of people living with HIV.”