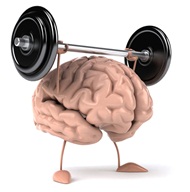 Society is obsessed with ways to stay young, both physically and mentally. We exercise our muscles to keep our bodies fit, strong, and healthy, but, asks a Medical Daily report, can we exercise the brain this same way? The report says in a SciShow's latest video, Can You Really 'Train' Your Brain?, host Michael Aranda explains "brain training" games – games that claim to improve memory, attention, reasoning skills, and even the onset of diseases like dementia – actually don't improve our overall brain health.

The report says basis of brain training relies on the concept of neuroplasticity, the idea that connections between neurons in the brain are plastic and changeable, and can adapt to new things. Studies on dementia and the ageing brain show that losing this plasticity may lead to cognitive decline, so brain training programs claim to stop, or even reverse this by "flexing" the brain like a muscle. We know the more we practice a task, the better we get at it, but can playing these brain games actually make us better at doing other real-life things, like remembering names and appointments?

The report says in 2010 study, researchers had over 11,000 people practice tasks meant to improve their reasoning, memory, and attention, but after six weeks, they'd only gotten better at the game themselves. In other words, their new skills didn't transfer over to other tasks, not even similar ones. The scientific community has come to the general consensus that brain training doesn't have a significant impact on cognition.

And, the report adds, in 2014, 70 neuroscientists and cognitive psychologists signed a statement saying, "We object to the claim that brain games offer consumers a scientifically grounded avenue to reduce or reverse cognitive decline when there is no compelling scientific evidence to date that they do."

So, the report asks, does that mean brain training doesn't work at all? Not exactly, it says. Brain training programmes won't actively harm us, but the way they are advertised is flawed. They do not improve our overall brain health, but they can be helpful in some specific cases. or example, a recent study found one rehab program that included skills training, practicing things like remembering names, and counting change helped patients with Alzheimer’s disease get better at those things.

The report says a healthy diet and exercise can suffice to keep the ageing brain healthy. Science is still trying to understand the effect of ageing on the brain and what causes dementia. Until then, brain training is all but just a mind game.

Aug 4th, 2021
The prospect of a prolonged COVID-19 outbreak and constantly evolving roster of restrictions has brought back...
Talking Points

Aug 4th, 2021
Herd immunity is no longer a discussion the world should be having, writes Professor Shabir A Madhi of the...
Coronavirus

Aug 4th, 2021
The Delta variant is more transmissible than Ebola and as infectious as chickenpox, warns the US Centers for...