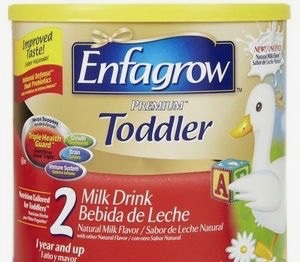 "A plumper baby is not necessarily a healthier baby," says Michelle Lampl, lead author of the article and director of the Centre for the Study of Human Health at Emory University.
In fact, toddler milk supplements may actually be doing harm by fuelling rapid, unnecessary weight gain in young children in the midst of a global obesity epidemic, she adds.

She notes that the liquid supplements may have as much as 240 calories per serving and have the potential to turn a healthy, lean toddler into an overweight one. "Healthy developmental growth does not mean gaining weight and getting fat," she says. "It is primarily measured by whether a child is growing a stronger, longer skeleton."

Liquid-based nutritional supplements fall into a regulatory loophole, because the US Food and Drug Administration (FDA) does not consider supplements to be a drug or a "conventional" food. "When a mother goes into a store and sees a toddler milk supplement on a shelf, she has no idea that it is falls into a less rigorous FDA category than those covering so-called conventional food and medicine," Lampl says. "We have a product aimed at a vulnerable population – infants and young children – that does not have adequate oversight."

Co-authors of the commentary article are: Meriah Schoen, a research assistant at Emory's Centre for the Study of Human Health and a graduate student focused on nutrition at Georgia State University; and Dr Amanda Mummert.

Companies have marketed infant formulas for decades. In 1981, however, the World Health Organisation (WHO) voted to recommend banning marketing of formulas for babies under six months, since the formulas were associated with lower rates of breastfeeding, and increased disease and malnutrition in the developing world.

Countries around the world adopted the rules and breastfeeding rates went up globally. The formula industry responded by focusing on toddler milk supplements, aimed at children ages six months and up.

Liquid-based supplements containing vitamins and minerals may be beneficial to children that are malnourished, or suffering from chronic diseases that prohibit their ability to consume solid foods, Lampl says. The problem, she adds, is that toddler milks have grown into a multi-billion-dollar industry that is expanding internationally to encompass healthy children.

Rapidly boosting the weight of children who are simply smaller than average but healthy could have lifelong consequences, she says. Barker, for instance, found a direct link to higher rates of metabolic disorders among individuals who were born relatively small and grew rapidly in the first few years of life.

"Parents are commonly concerned about the size of their children and how well they are doing developmentally," Lampl says, adding that the growth charts used in paediatrician offices are often misunderstood. "Not all kids who are smaller than average have a problem."

Busy mothers on the go, who may be consuming "energy drinks" and liquid supplements themselves, are primed to buy toddler milk for young children under the assumption that they are healthy choices, particularly for children who may be picky eaters.

"Although it can take a picky eater up to 20 times of trying a food to decide if they like it, most mothers offer a food fewer than five times before switching to something more convenient," Lampl says. "It's much easier to hand your child a sugary 'toddler milk,' thinking it's healthy and it helps them grow."

The WHO is set to consider recommendations concerning calorie amounts and ingredients for liquid-based nutritional supplements marketed to toddlers and older children during a meeting in early December.

Those recommendations will not have teeth, however, and it will be up to individual governments whether they decide to adopt them and enforce them. "We are really behind when it comes to regulatory oversight for the marketing of these supplements, and for rigorous scientific research showing the impact of their widespread use on children," Lampl says.

Abstract
The Developmental Origins of Health and Disease (DOHaD) model recognizes growth in infancy and childhood as a fundamental determinant of lifespan health. Evidence of long-term health risks among small neonates who subsequently grow rapidly poses a challenge for interventions aiming to support healthy growth, not merely drive weight gain. Defining healthy growth beyond “getting bigger” is essential as infant and young child feeding industries expand. Liquid-based nutritional supplements, originally formulated for undernourished children, are increasingly marketed for and consumed by children generally. Clarifying the nature of the evidentiary base on which structure/function claims promoting “healthy growth” are constructed is important to curb invalid generalizations. Evidence points to changing social beliefs and cultural practices surrounding supplementary feeding, raising specific concerns about the long-term health consequences of an associated altered feeding culture, including reduced dietary variety and weight gain. Reassessing the evidence for and relevance of dietary supplements’ “promoting healthy growth” claims for otherwise healthy children is both needed in a time of global obesity and an opportunity to refine intervention approaches among small children for whom rapid subsequent growth in early life augments risk for chronic disease. Scientific and health care partnerships are needed to consider current governmental oversight shortfalls in protecting vulnerable populations from overconsumption. This is important because we may be doing more harm than good.