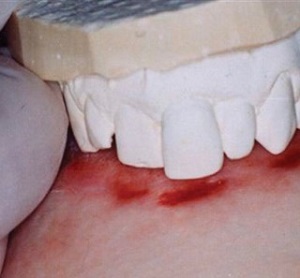 A US research review highlights both the lack of research regarding validity of bite-mark identification as trial evidence and the lack of support provided by what research does exist.

Forensic dentists claim that they can accurately associate a bite mark to the one and only set of teeth in the world that could have produced the crime scene bite mark. There is, however, no sound basis for believing that forensic dentists can do such a thing.

Before 1974, forensic dentists confined themselves to trying to identify victims of disasters, usually by comparing the victims' dentition against their dental records, which often included full-mouth X-rays. A 1975 California case marked the first-time bite marks were used to try to identify a perpetrator. The circumstances of the injury, however, presented an unusually stable bite mark of a very unusual set of teeth.

Studies of wrongful convictions based on DNA exonerations have found the forensic sciences to be second only to eyewitness errors as a source of false or misleading evidence contributing to erroneous convictions. Error rates by forensic dentists are perhaps the highest of any forensic identification specialty still practised.

One recent evaluation sought to examine all empirical research aimed at determining whether all human dentition is unique. Following an extensive bibliographic search, 13 studies were found and each was reviewed in detail. None was able to support a conclusion of dental uniqueness. Nine of the studies explicitly failed to find uniqueness. Four claimed to have succeeded, but were found to be methodologically incapable of supporting the asserted conclusions. Four additional studies found specimens in the study populations that were indistinguishable within measurement resolution – that is, their differences did not exceed the margin of error for the study population.

The American Board of Forensic Odontology conducted a reliability study of the judgments of experienced, board-certified forensic dentists making decisions about bite marks. Researchers selected 100 photographs of suspected bite-mark injuries from actual cases. These were examined by 38 forensic odontologists, who were asked to review the injuries and respond to three questions: is there sufficient evidence in the materials to determine whether the injury is a human bite mark? Is it a human bite mark, not a human bite mark, or suggestive of a human bite mark? Does the bite mark have distinct, identifiable arches and individual tooth marks? For only 14 of the 100 cases did at least 80% of the examiners give the same answers to all three questions.

Moreover, recent reviews of the field's claims, as well as recent empirical findings, have underscored the lack of reliability and validity of the most fundamental claims about the ability of forensic dentists to identify the source of bite marks on human skin.

A number of DNA exonerations have occurred in recent years for people convicted based on erroneous bite-mark identifications.

A committee of the National Academy of Sciences recently concluded that bite-mark identification testimony has been "introduced in criminal trials without any meaningful scientific validation, determination of error rates, or reliability testing."

"Evidence-based evaluation of forensic techniques has only recently been recognised as essential to establishing scientific claims – about a century later than it should have, said lead author Michael Saks, a psychology and law professor at Arizona State University. "And bite mark identification has become a central focus of concern."