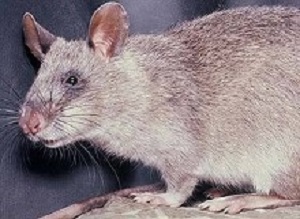 Rats are able to detect whether a child has tuberculosis (TB) and are much more successful at doing this than a commonly used basic microscopy test. These are the results of research led by Georgies Mgode of the Sokoine University of Agriculture in Tanzania.

The study shows that when trained rats were given children's sputum samples to sniff, the animals were able to pinpoint 68% more cases of TB infections than detected through a standard smear test. Inspiration for investigating the diagnosis of TB through smell came from anecdotal evidence that people suffering from the potentially fatal lung disease emit a specific odour.

According to Mgode, current TB detection methods are far from perfect, especially in under-resourced countries in sub-Saharan Africa and South East Asia where the disease is prevalent, and where a reasonably cheap smear test is commonly used. Problems with this type of test are that the accuracy varies depending on the quality of sputum sample used, and very young children are often unable to provide enough sputum to be analysed.

"As a result, many children with TB are not bacteriologically confirmed or even diagnosed, which then has major implications for their possible successful treatment," explains Mgode. "There is a need for new diagnostic tests to better detect TB in children, especially in low and middle-income countries."

Previous work pioneered in Tanzania and Mozambique focussed on training African giant pouched rats (Cricetomys ansorgei) to pick up the scent of molecules released by the TB-causing Mycobacterium tuberculosis bacterium in sputum. The training technique is similar to one used to teach rats to detect vapours released by landmine explosives. In the case of TB, when a rat highlights a possibly infected sample, it is analysed further using a WHO endorsed concentrated microscopy techniques to confirm a positive diagnosis.

Sputum samples were obtained from 982 children under the age of five who had already been tested using a microscopy test at clinics in the Tanzanian capital of Dar es Salaam.

From the smear tests, 34 children were confirmed to have TB. When the same samples were placed out for the rats to examine, a further 57 cases were detected and then confirmed after being examined under a more advanced light emitting diode fluorescence microscope.

The news about the additional cases confirmed by endorsed concentrated smear microscopy was passed onto the relevant clinics, and efforts were made to track down infected patients so that they could start their much-needed treatment.

"This intervention involving TB screening by trained rats and community-based patient tracking of new TB patients missed by hospitals enables treatment initiation of up to 70%. This is a significant proportion given that these additional patients were considered TB negative in hospitals, hence were initially left untreated," adds Mgode.

Abstract
Background: Tuberculosis (TB) diagnosis in children is a challenge with up to 94% of children with TB treated empirically in TB high-burden countries. Therefore, new diagnostic tests are needed for TB diagnosis. We determined the performance of trained rats in the diagnosis of pediatric TB and whether they can improve detection rate compared to the standard of care.
Methods: Presumptive TB patients in 24 TB clinics in Tanzania were tested. Samples indicated as TB-positive by rats underwent confirmation by concentrated smear microscopy. TB yield of bacteriologically confirmed pediatric TB patients (≤5 years) was compared with yield of standard of care.
Results: Sputum samples from 55,148 presumptive TB patients were tested. Nine hundred eighty-two (1.8%) were the children between 1 and 5 years. Clinics detected 34 bacteriologically positive children, whereas rats detected additional 23 children yielding 57 bacteriologically TB-positive children. Rats increased pediatric TB detection by 67.6%. Among 1–14-year-old children, clinics detected 331 bacteriologically positive TB whereas rats found the additional 208 children with TB that were missed by clinics. Relative increase in TB case detection by rats decreased with the increase in age (P<0.0001).
Conclusion: Trained rats increase pediatric TB detection significantly and could help address the pediatric TB diagnosis challenges. Further determination of accuracy of rats involving other sample types is still needed.