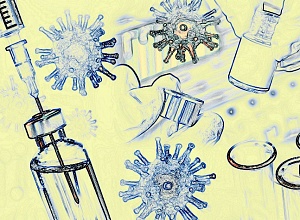 Some of South Africa’s most respected and influential scientists have been engaged for weeks in a bitter dispute in the SA Medical Journal over the government’s vaccine rollout, or lack thereof, as well as the secrecy in which its shrouded, writes William Saunderson-Meyer in a column on Politicsweb.

On the one side are academics from the universities of Witwatersrand, Cape Town and KwaZulu-Natal. On the other, the head of the vaccine arm of the advisory committees set up to provide the best possible scientific advice to shape the national response to the COVID-19 pandemic.

Perhaps because the barbed exchanges have been conducted through editorials and correspondence in the usually staid pages of the august SA Medical Journal (SAMJ), the matter has gone virtually unremarked upon. That’s unfortunate, since the dispute goes to the heart of the government’s inability to heed expert advice, even while actively soliciting it.

All around the world, one of the mantras of the past pandemic year has been “to listen to the science”. That’s all good and well but, as has slowly dawned on the more gullible among us, the science is rarely unambiguous and uncontested.

Scientists are not immune to the temptation of cherry-picking information which drives towards conclusions that chime with their personal ambitions and prejudices. In addition, the welding of science to public policy is beset with difficulties, not the least of them being that many politicians’ brains are fact-free vacuums.

Any advice that contradicts their ideology or is likely to upset their supporters, tends to get short shrift. Fortunately for the politicos, an accommodating scientific opinion can always be found to bolster a course of action that had already been decided earlier, on the basis of expediency.

This see-saw between evidence-based public health decisions and those made for political reasons is a global phenomenon. While the scientists don’t always get it right — the Imperial College modelling that the United Kingdom government claimed as the basis of its most criticised COVID-19 control decisions has been hopelessly wrong at times — but at least it takes policymaking beyond the simplistic “If we are to win, you have to lose” approach of petty political party rivalries.

The newfound public prestige of science sits uneasily with politicians. The antipathy of former US President Donald Trump towards medical scientists was palpable, especially when it came to Dr Anthony Fauci, who had served five previous presidents as chief medical advisor, starting with Ronald Reagan in 1984.

In South Africa, despite the initial assurances of President Cyril Ramaphosa and Health Minister Dr Zweli Mkhize that the process of using science to inform policy would be transparent, it has been anything but. And, as is invariably the case with the African National Congress government, ideology and ministerial clout were quickly shown to trump rational thinking.

Co-operative Affairs Minister Nkosazana Dlamini-Zuma’s personal antipathies towards tobacco and alcohol, not the recommendations of the Medical Advisory Committee (MAC), were the reasons for the recurrent bans on the sale of those substances. So, too, the bizarre personal “beach patrols” of the Cat-in-the Hat, Police Minister Bheki Cele, against lone bikini-clad sunbathers and surfers.

Similarly, the ANC’s rubber-spined capitulations to its most strident constituents. When the taxi sector baulked at MAC-recommended restrictions on passenger loads and interprovincial travel, the government simply backed down. When the ANC-aligned teachers union insisted, against all research evidence, that it was unsafe to open state schools, their self-serving wishes were obeyed.

But it was naive of the government to think that it could corral the country’s leading medical scientists, assure them that their opinions would be taken seriously, and then so flagrantly to ignore their input. These are people, all with international reputations that attest to the excellence of South African medicine, who are accustomed to robust debate, but not being told by ministers and officials to shut up.

The first to publicly break ranks was the Medical Research Council’s president, Prof Glenda Gray. Gray, in her personal capacity, criticised the government’s lockdown regulations and said that child malnutrition cases had during the pandemic increased at Chris Hani Baragwanath Hospital.

This prompted a sharp rebuttal from Mkhize, with his intemperate Health Director-General Dr Anban Pillay calling Gray a “liar” and demanding that the MRC board investigate her conduct. So much for the cut and thrust of scientific debate.

The MRC initially acted with discomfiting alacrity to accommodate its political masters. The board apologised for Gray’s comments and instituted an investigation into Gray’s “damaging” comments. Within 24 hours, it had changed its tune, saying that it had determined that Gray had not, after all, breached the MRC’s policies.

The MRC’s about-turn is easily explained. There was unprecedented outcry within the scientific community, both locally and internationally, against the scapegoating of Gray.

More than 300 leading scientists and academics —including faculty deans, other MAC members, former University of South Africa Vice-Chancellor Barney Pityana and Wits Vice-Chancellor Prof Adam Habib — came out in support of Gray. Top academics, in an editorial in the SAMJ, called on Mkhize to distance himself from the actions of Pillay.

Although Gray won the battle, she lost the war. Within months, the most outspoken medical scientists on the MAC, all of whom had at some stage found themselves at public odds with the government’s actions and its secrecy over the advice it was getting, were peremptorily axed in what Mkhize, with Orwellian cynicism, described as a “strengthening” of the committee.

Gray got the chop, as did Prof Shabir Madhi, head of vaccinology at the University of the Witwatersrand and leader of South Africa’s first two Covid-19 vaccine trials, Prof Francois Venter of Wits, head of the Ezintsha international network of public health experts, and Dr Angelique Coetzee, chair of the SA Medical Association.

Madhi has gone on to be possibly the most persistent and painful thorn in the flesh of Mkhize. He argued passionately and repeatedly against the Health minister’s decision to not use the AstraZeneca doses that SA had acquired, instead flogging them off to other African Union countries.

The scientists expressed dismay at the “squandering of an opportunity” to protect at least half a million of our most vulnerable citizens and noted that the decision contradicted World Health Organisation advice and “the current state of vaccine science”. But the sting, to the thin-skinned politicians and Health officials, would have been their reminder that “unfortunately, none of the MAC-Vac’s advisories, rationales or decision have been published in the public domain since 3 January 2021, and none of the debate around specific vaccine choices has therefore been open to the public or the broader scientific community”.

Prof Barry Schoub, head of the MAC vaccine committee and the government’s chief medical Rottweiler, responded with undisguised anger. In a rebuttal SAMJ editorial, he lashed his impertinent critics for their “loathsome … distasteful, uncalled-for, and damaging” activities in daring to question publicly the Health Department’s actions.

To do so served only one purpose, wrote Schoub. That was to damage “the fragile trust of the public”.

After Schoub's viciously snide tone throughout — he makes much of a misdated reference in the footnotes — the editorial subsides into limp incongruity. “Science certainly encourages various interpretations … from diverse standpoints. However, discussions must be in a respectful and professional manner,” he sniffed.

Undaunted, the sceptics responded in the May edition of the SAMJ, dismissing Schoub response as “a distraction from a bigger problem”. That problem being that “South Africa’s vaccine strategy is being decided without appropriate levels of transparency, by individuals with a track record of questionable decision-making.”

The to-ing and fro-ing in the SAMJ, although technical in parts, is not so arcane that it cannot be followed by any engaged layperson. That Schoub, and by implication Mkhize, believe that the public is so intellectually delicate that it will crumble when two sets of experts debate the wisdom of policies that affect every South African, is extraordinary.

It’s a reminder, also, that the government’s instinct to use medical science not to illuminate but to camouflage, is still alive from the shameful response to the HIV/Aids pandemic during the Thabo Mbeki years.

Just for the record, it’s not heated scientific discourse that makes us feel insecure and distrustful. It’s “experts” who want to take life or death decisions in secret, free from scrutiny and challenge.

This column was first published on Politicsweb

See from the MedicalBrief archives: