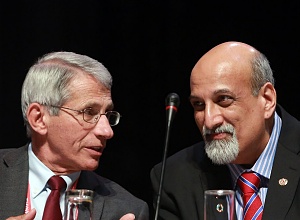 South Africa's Professor Salim Abdool Karim and the United States's Dr Anthony Fauci have jointly been awarded the 2020 John Maddox Prize for standing up for science during the COVID-19 virus pandemic, reports MedicalBrief.

The prize, which has been awarded annually since 2012, is a joint initiative of the charity Sense about Science and the leading international scientific journal Nature.

Karim, Fellow of the Royal Society, an infectious diseases epidemiologist and Director of the Centre for the AIDS Programme of Research in South Africa (CAPRISA) and the DSI- NRF Centre of Excellence in HIV Prevention, and Anthony Fauci, Director of the National Institute of Allergy and Infectious Diseases (NIAID), have been recognised for going beyond the line of duty as government advisors on health. They communicated the complex and changing science of COVID-19 to the public and policymakers, in the midst of international uncertainty and anxiety.

In a statement, the organisers noted that “while other government scientists avoided the spotlight, Anthony Fauci has steadfastly responded to questions from the public. In South Africa Abdool Karim showed similar dedication. He has a reputation for clear and honest communication, something that has allowed him to generate public trust in fast-moving science. Respected for his international science advocacy, engaging with the media and the public has become integral to his role as a scientist.”

Said Salim Abdool Karim, “I am deeply honoured to receive the 2020 John Maddox Prize for Standing up for Science, jointly with my colleague Dr Anthony Fauci. Providing scientific advice on Covid-19 in the midst of uncertainty and anxiety proved to be a difficult task, made more challenging by conspiracy theories. But, I found that the task was made easier by staying true to the available scientific evidence without bending to ideology or vested interests. Serving the nation by promoting science, evidence and public discussion during two pandemics – AIDS and Covid-19 – over the last 30 or so years has been a privilege for me.”

Tracey Brown, director, Sense about Science: “The prize, by its nature, has typically focused on people who have not had recognition of their efforts to communicate science in difficult circumstances. This year the biggest scientific battles have been under a spotlight from politicians, the media, and the public, so as judges our considerations were different.

“We have high expectations of people in public office, so we are recognising a standard above and beyond that. This crisis drew many advisers away into the corridors of decision making and official announcements. Instead, our joint winners took every opportunity to talk the public through uncertain and emerging science.”

Magdalena Skipper, editor-in-chief, Nature: “This year has demonstrated how critical it is for everyone that science be communicated clearly and accurately. As many are confronted with confusing, contradictory and sometimes even false information, leaders who are able to convey the important messages clearly, can literally mean the difference between life and death. The Maddox Prize serves an important purpose in recognizing those who stand up for sound science and evidence. It is our pleasure to work with Sense about Science to recognize the roles that Anthony Fauci and Salim Abdool Karim have played in this pandemic and also that of the AIDS crisis in the 1980s.”

The Maddox Prize 2020 received over 100 nominations from 34 different countries.

In Daily Maverick, Abdool Karim is quoted as saying that he was “deeply honoured” to receive the prize jointly with Fauci:

“Providing scientific advice on Covid-19 in the midst of uncertainty and anxiety proved to be a difficult task, made more challenging by conspiracy theories. But, I found that the task was made easier by staying true to the available scientific evidence without bending to ideology or vested interests. Serving the nation by promoting science, evidence and public discussion during two pandemics — Aids and Covid-19 — over the last 30 or so years has been a privilege for me.”

Abdool Karim and Fauci are long-standing colleagues and both tackled the HIV/Aids epidemic. During the Covid-19 pandemic, they remained in contact. “When I was initially appointed as the chair of the ministerial advisory committee, one of the first emails I sent off was to Dr Fauci. I was just wanting him to establish an open line of communication,” recalls Abdool Karim.

“I said: we don’t really know what’s going on with this virus, any information is helpful and I might be tapping into you. He sent back: of course, anytime. So, we’ve kept in touch over this time. Each of us are dealing with quite different situations in our countries and it just cements quite a long relationship as colleagues and fellow scientists.”

The pandemic has required that scientists tackle the science of Covid-19 and science literacy in the same breath — which is no easy task, says Abdool Karim.

“I think the big problem is to convey the complexity of scientific information, in terms of what do we really know and what do we think we know. Because there’s a big difference,” he says.

He explains that a scientific result in a journal article is “not a fact — it’s just a finding”. He said the challenge is to convey the information with the level of uncertainty that comes with it, “because it’s going to change — science is like that”. All this needs to be said in very few words. Another challenge is commentators “who try to create the impression that everything is black and white”.

This challenging undertaking does have a silver lining, he says “I think for me, the most impressive thing I have witnessed is just the democratisation of science. It has become accessible to everybody. I have so many people talking to me in the language of epidemiology. I mean, they talk to me about case fatality rates and flattening the curve. They talk in language that would previously be the language we would use at a conference of infectious diseases or epidemiology. ”