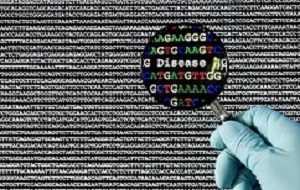 For all the promises of genomics ushering in a new era, with scientists urging people to get their DNA sequenced, a first pilot study found that most of the adults who underwent genome sequencing and were told they had a disease-causing DNA variant did not, in fact, have that disease. Few got information that improved their health.

The pilot study found that 11 out of 50 volunteers (aged 41 to 68) who had their genome sequenced were told they had a mutation that definitely or possibly causes a particular disease, ranging from pituitary thyroid insufficiency to the rare cardiovascular disorder Romano-Ward syndrome. Yet only 2 of the 11 actually had the disease, which in every case should have appeared by adulthood.

Whole genome sequencing reads the nearly 3bn chemical “letters” – the A’s, T’s, C’s, and Gs – that constitute an individual’s DNA. Some geneticists envision genome sequencing as a way to identify everything from what drugs an individual should avoid (if he has the DNA variant that makes statins dangerous to him) to what diseases her doctor should screen for and possibly treat early.

The MedSeq study put that hope to the test in the first-ever randomised trial of whole genome sequencing in adults. Volunteers were assigned, essentially by the flip of a coin, to either have their genome sequenced (and analysed for the presence of DNA variants in 4,631 genes) or to have their family medical history analysed.

The 4,631 genes the researchers analysed were those that, if mutated, are supposedly sufficient to cause a usually rare disease, such as ankyrin-B-related cardiac arrhythmia (caused by mutations in the gene ANK2). Such single-gene disorders are called Mendelian. The study did not include the thousands of genes that merely raise the chance of developing a disease to which many other genes contribute, such as the vast majority of cancers, heart disease, and psychiatric disorders. That should have stacked the odds so that an unearthed mutation really did cause disease.

The key finding – that few people with “disease-causing” mutations actually had a genetic disease – therefore raises questions about whether genome sequencing in generally healthy adults can be medically justified. Although the price (about $1,000 per person) of genome sequencing has fallen, Dr Teri Manolio of the National Human Genome Research Institute wrote in an editorial, the “lack of evidence of utility will be one of the hardest (obstacles) to overcome” for proponents of genome sequencing in medical practice.

The problem of disease-causing variants not causing disease can be traced to genetic databases. They list mutations – an A instead of a T at one spot in the gene, for example, or a missing T – that are either benign or cause rare disorders. Much of that information comes from just a few families that might be unusual, including in the other genes they carry and the environment they live in, Vassy said.

Outside of those families, “people might have the variant but not the disease,” because other genes or the environment neutralise it, he said. “This shows how much further we need to go to make our databases reliable.”

The researchers said that none of the 11 patients benefitted from their “molecular diagnosis,” at least in the short term. That included the two who did have the disease their mutation is expected to cause but had not previously been diagnosed. One had the eye disease fundus albipunctatus, Vassy said, “so now he has a name for his condition,” which makes it difficult for his eyes to adapt to light and dark. There is no treatment, however.

The other, Irena Vodenska, 46, has a DNA variant that causes porphyria, a blood disease that causes extreme sensitivity to the sun, blistering, and other symptoms. Vodenska, a professor at Boston University, sometimes gets odd rashes but had never been diagnosed with porphyria and “didn’t think of (the rashes) as genetic,” she said. “It was just part of me.”

Knowing she has the mutation theoretically allows her physician to avoid prescribing medications that exacerbate it, and lets her avoid things that can stress her heart (an occasional consequence of porphyria). “So I think I did learn something from my genome,” Vodenska said.

Even K Eric Paulson, who was told he has a mutation that causes a devastating skeletal disease called chondrodysplasia yet has no such ailment, is happy he was sequenced, saying he is in the “it’s better to know” camp. But he worries insurers might use the information against him. When he volunteered for the study, said Paulson, a biologist at Tufts University, he “thought there was no possibility such a thing could again happen in our country. Clearly, my assumption was wrong.”

Michael Watson, executive director of the American College of Medical Genetics and Genomics, said whole genome sequencing in healthy individuals “likely does” have clinical value, “but the data by which we can predict who will express the disease for which there is a risk remain weak.”

Some of the study’s findings were reassuring. Volunteers who were sequenced, including those told they had a disease-causing mutation, did not flip out. Six months after receiving their results, they reported levels of depression or anxiety no different from (and on some measures less than) those levels before they got their results. On the other hand, participants were told they might receive unsettling information, so people who worried about that might have declined to join the study, leaving only the emotionally resilient (and perhaps unrepresentative).

The report says a common worry about using genomics in medicine is that physicians won’t know what to make of DNA information. Here, too, the study was somewhat reassuring. The volunteers’ primary care doctors, who received six hours of training on how to interpret the one-page genome summary, handled 8 of the 11 findings of disease-causing genes appropriately, according to a panel of geneticists. They referred five patients to specialists or for tests, such as electrocardiograms, and simply educated others, telling them that the disease probably wasn’t present if it hadn’t shown up yet, and discussing whether their children might have inherited the mutation.

One problematic finding is that people who received genome sequencing underwent more medical tests and had an average of $350 more in health care costs in the six months after they got their DNA results. Medical costs for the 11 told they had a disease-causing mutation were double those of the 39 who didn’t.

That difference could have been caused by chance alone, according to a statistical analysis of the data, but this finding raises the possibility that genome sequencing could inflate medical bills for no benefit. Two patients with variants associated with heart rhythm abnormalities had cardiology work-ups, for instance, but both were normal.

The report says outside experts urged caution in interpreting the new study, mostly because its size was too small to tell whether sequenced patients’ anxiety or depression was greater than non-sequenced patients, and because it followed them for only six months. Dr Erick Scott of the Icahn Institute for Genomics and Multiscale Biology at Mount Sinai School of Medicine suggested the sequencing could have been more useful if the researchers had looked at more genes involved in metabolising drugs, which can tell patients that they might be harmed by certain medications.

It’s also possible that whole genome sequencing might prove more helpful in younger people, who can use the information to make reproductive decisions.

As for Vassy, he has not had his genome sequenced, but says he might do so out of “curiosity.” “Nothing in this study has dissuaded me from doing it,” he said. “But I don’t think it will unlock the secrets of my health and disease, let alone make me run to my doctor with it to make a health plan.”

Abstract
Background: Whole-genome sequencing (WGS) in asymptomatic adults might prevent disease but increase health care use without clinical value.
Objective: To describe the effect on clinical care and outcomes of adding WGS to standardized family history assessment in primary care.
Design: Pilot randomized trial. (ClinicalTrials.gov: NCT01736566)
Setting: Academic primary care practices.
Participants: 9 primary care physicians (PCPs) and 100 generally healthy patients recruited at ages 40 to 65 years.
Intervention: Patients were randomly assigned to receive a family history report alone (FH group) or in combination with an interpreted WGS report (FH + WGS group), which included monogenic disease risk (MDR) results (associated with Mendelian disorders), carrier variants, pharmacogenomic associations, and polygenic risk estimates for cardiometabolic traits. Each patient met with his or her PCP to discuss the report.
Measurements: Clinical outcomes and health care use through 6 months were obtained from medical records and audio-recorded discussions between PCPs and patients. Patients’ health behavior changes were surveyed 6 months after receiving results. A panel of clinician-geneticists rated the appropriateness of how PCPs managed MDR results.
Results: Mean age was 55 years; 58% of patients were female. Eleven FH + WGS patients (22% [95% CI, 12% to 36%]) had new MDR results. Only 2 (4% [CI, 0.01% to 15%]) had evidence of the phenotypes predicted by an MDR result (fundus albipunctatus due to RDH5 and variegate porphyria due to PPOX). Primary care physicians recommended new clinical actions for 16% (CI, 8% to 30%) of FH patients and 34% (CI, 22% to 49%) of FH + WGS patients. Thirty percent (CI, 17% to 45%) and 41% (CI, 27% to 56%) of FH and FH + WGS patients, respectively, reported making a health behavior change after 6 months. Geneticists rated PCP management of 8 MDR results (73% [CI, 39% to 99%]) as appropriate and 2 results (18% [CI, 3% to 52%]) as inappropriate.
Limitation: Limited sample size and ancestral and socioeconomic diversity.
Conclusion: Adding WGS to primary care reveals new molecular findings of uncertain clinical utility. Nongeneticist providers may be able to manage WGS results appropriately, but WGS may prompt additional clinical actions of unclear value.