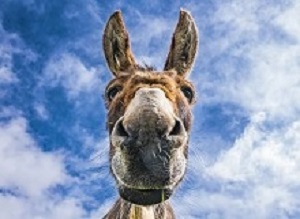 Ejiao is the name of a traditional Chinese medicine that supposedly treats anaemia, reproductive issues and insomnia – though the alleged medicinal properties are unproven. Nonetheless, it's an ingredient in tonics and face creams. Sales of the products are a multi-million-dollar business. And it's quite literally killing the world's donkeys, according to an NPR report

Millions of donkeys each year are slaughtered so manufacturers in China can boil the skins to extract the gelatin, which is used to make ejiao. According Chinese state-run news agency Xinhua, around 4m donkey hides are needed each year to produce enough ejiao for the market in China, but the annual supply of donkeys from China is fewer than 1.8m. To fill the gap, China is importing donkey skins from developing countries where there are populations of relatively cheap animals.

"The industrial scale at which these animals are being slaughtered is an issue of massive concern," says Simon Pope, rapid response manager at Donkey Sanctuary. "It's probably the biggest issue facing donkeys ever."

The report says this year Brooke of the United Kingdom became the latest international animal welfare group to condemn the donkey skins trade. "The effect we're seeing on the African donkey population is proving even greater than we originally feared," says Petra Ingram, CEO of the charity, which focuses on working horses, donkeys and mules. "In taking away someone's donkey, it can mean taking away their means of making a living, potentially for a dangerously long time."

"The rate of decline we're witnessing in the donkey populations of some African countries is dramatic and unsustainable," says Geoffrey Dennis, CEO of SPANA, a charity that seeks to improve the welfare of working animals in poor communities.

The report says Burkina Faso, Ghana, Ivory Coast, Kenya, Nigeria, South Africa and Tanzania are among the countries where the donkey population is threatened by voracious demand for their skins, according to animal welfare charities. The donkey population in Botswana, for example, has decreased 39% from 229,000 in 2014 to 142,000 in 2016, according to SPANA. In early 2018, SPANA staff in Mali reported that 2,000 donkeys were being sold for slaughter every week at the country's seven major livestock markets.

Dr Matthew Stone, deputy director general, International Standards and Science, at the World Organisation for Animal Health (OIE), believes the situation is worsening. Because of demand for ejiao, the legal and illegal trade of donkey products "has recently increased, causing major impacts on the rural livelihoods, donkey populations health and welfare and the environment worldwide," he says. The problem is also spreading in countries such as Brazil.

"The industry is growing so fast that existing laws haven't caught up," says Pope of Donkey Sanctuary, who visited the country last fall. He interviewed people on the ground who told him that donkeys might be transported long distances for several days by truck and are given no food or water while they await slaughter in overcrowded pens.

The report says some of these donkeys are stolen from their owners, according to reports obtained by the animal rights groups. For example, 705 donkeys were stolen in Kajiado County, Kenya between December 2016 and March 2017, according to Brooke East Africa – as reported by donkey owners to the group's local partner organisations. And while many donkeys are slaughtered in legal, government-sanctioned slaughterhouses, these stolen donkeys often end up in small-scale slaughterhouses, which kill them under inhumane conditions, according to a report from Donkey Sanctuary.

This kind of inhumane donkey slaughter is especially acute in Africa, the groups say, where China has a strong presence because of business ventures, such as building large infrastructure projects.

The report says even when owners willingly sell a spare donkey to make money, they may not realise the long-term impact on their livelihoods. With skins in such high demand, prices for donkeys have doubled, tripled or quadrupled so owners can't replace donkeys they have sold or buy new ones if their donkeys are stolen. In Kenya, for example, prices jumped from $40 per animal to over $160 from February to August 2017

The report says donkeys that are left behind are worked even harder.

Breeding more donkeys is not a solution. With a 10-to-14 month period of gestation, the animals can't be bred fast enough to fulfill demands for ejiao. The report says donkeys are also prone to hyperlipemia, a stress-related condition that can cause them to drop dead or suffer spontaneous abortions. "If you were going to breed an animal, donkeys wouldn't be top of most people's list," Pope of Donkey Sanctuary observes.

So, the charity is lobbying African governments to enforce existing restrictions on the skin trade. It also lobbied e-commerce website eBay, which agreed to stop selling ejiao products in Dec. 2017.

The report says other countries have put a halt to slaughter and export. In Zimbabwe, a slaughterhouse had proposed killing about 12,000 donkeys per year. "That would have equated to a loss of almost a tenth of the country's donkey population in just 12 months," estimates Dennis from SPANA. Those plans were halted in 2017. Botswana and Tanzania in 2017 followed Niger, which banned exports and restricted the skins trade in 2016. In 2017, Uganda banned the trading of donkeys for slaughter and ordered closures of donkey slaughterhouses. The decision was reportedly due to the negative consequences on households that rely on donkeys to transport everything from water to harvested foods to be sold at market.

But, the report says, such steps don't necessarily stop the trade. "In some cases, this has led to the emergence of a black market and an explosion in donkey thefts," says Dennis.

SPANA last year called for an immediate halt to the ejiao trade in Africa while its impact is assessed. It is working closely with a number of African governments to implement bans or restrictions on slaughtering donkeys and exporting donkey products. Both SPANA and Donkey Sanctuary are training people to build fenced corrals for donkeys to secure the animals. Some people in Kenya are bringing donkeys into their huts at night and sleeping next to them to protect them, says Pope.

Donkey Sanctuary is also helping to run workshops with local authorities and police to enforce bans on the illegal trade, track the underground trade and take action on reports of stolen donkeys. Brooke is working with communities to raise awareness of the consequences of the skin trade. "We're making sure owners understand the life-time value of donkeys and the significant risk to livelihoods of sale for immediate income," says Whear.

Donkey Sanctuary is also helping to run workshops with local authorities and police to enforce bans, track the underground trade, and take action on reports of stolen donkeys. Some people in Kenya are bringing donkeys into their huts at night and sleeping next to them to protect them, notes Pope.

The report says tracking and stopping a booming and often illicit trade in Africa and South America is a huge task for relatively small animal welfare non-profits such as Donkey Sanctuary. "When the sanctuary was set up, we didn't think we'd ever be doing this kind of work," says Pope, who worked in anti-wildlife poaching in Namibia before joining Donkey Sanctuary. "We're horrified it's come to this. We've got to rise to the challenge. It's the biggest thing this organization has done and will do."