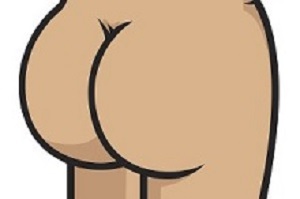 The British Medical Journal has pulled a paper on parasitic worms after the subjects of the study objected when photos of their buttocks were published by tabloids. The Independent reports that an unnamed husband and wife contracted the infection on the island of Martinique during a Caribbean cruise.

While enjoying a trip to the beach, the couple reported feeling an initial burning sensation on their skin as they sat on the sand. A day later, the 52-year-old woman noticed a rash of “red pinprick marks” had appeared across her buttocks, according to the BMJ study.

The pair later sought treatment at Addenbrooke’s Hospital in Cambridge, where doctors told them they had cutaneous larva migrans, also known as hookworm larvae. They were both treated with medication to treat parasitic infections after a round of steroids and antibiotics they were given on the cruise ship failed to work.

But, the report says, the trouble arose when Dr Douglas Maslin at Addenbrooke’s decided to share the case through the BMJ after noting a “lack of familiarity with the condition” had delayed his team from making a diagnosis. Photographs of the couples’ infections posted alongside Dr Maslin’s report were soon picked up by several tabloids.

Within days of the findings being published, the photographs were being run next to stories with headlines such as “Caribbean getaway leaves a nasty souvenir” and “Beach couple left with burning red rashes on their backsides”.

The report says the exposure proved too much for at least one of the subjects, as the BMJ has now accepted a request to remove the study from its records. “This article has been withdrawn”, the BMJ website now reads in the place where the article once was.
“With no admission of liability, BMJ has removed this article voluntarily at the request of the patient concerned.”

The report says Addenbrooke’s Hospital has been contacted for comment.