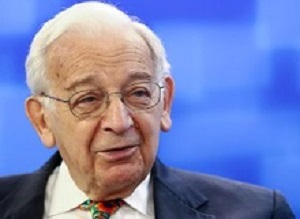 James Holland, a founding father of chemotherapy who helped pioneer a lifesaving drug treatment for paediatric leukaemia patients, has died at his home in Scarsdale, New York, reports The New York Times. He was 92. The cause was respiratory failure, his son Steven said.

The report says Holland and his medical collaborators in the 1950s were scorned by some colleagues as research “cowboys,” as he put it, because they audaciously tackled what was considered an incurable disease and tried to treat it with several chemicals simultaneously, instead of sequentially.

When their research began, fewer than one in three children who were found to have acute lymphoblastic leukaemia lived as long as a year. Today, as many as nine in 10 survive the disease, in which the bone marrow makes too many immature white blood cells. Another clinical trial that Holland directed in the 1970s, to contain acute myeloid leukaemia, a somewhat similar malfunction in blood cell production, resulted in what became the standard treatment.

The report says his work extended lives. One former patient who was 49 when he enrolled in a clinical trial at the Roswell Park Comprehensive Cancer Centre in Buffalo in 1970 – Holland was doing his research there at the time – is poised to celebrate his 97th birthday in June.

Holland went on to become chief of oncology at Mount Sinai Hospital in Manhattan. Just as he helped establish oncology as a medical discipline, his wife, Dr Jimmie Holland, who died in December, inaugurated the field of psycho-oncology. While she cared for the emotional distress of cancer patients, he was more concerned not only with their individual medical condition but also with experimenting to discover universal remedies. “Patients have to be subsidiaries of the trial,” the report quotes him as saying in 1986. “I’m not interested in holding patients’ hands. I’m interested in curing cancer.”

He acknowledged that some patients become guinea pigs, and that they sometimes suffer discomfort in the effort to eradicate tumours, but he said that even those who die provide lessons for others who will survive. “If you do no harm,” Holland said, “then you do no harm to the cancer, either.”

The report says in 1972, he shared the prestigious Albert Lasker Clinical Medical Research Award as chair of an international consortium of physicians and scientists whose experimentation helped increase the life expectancy of children with acute lymphocytic leukaemia. The award citation lauded “his great clinical skill, and his outstanding ability in clinical investigation.”

Holland was the president of the American Association for Cancer Research in 1970 and president of the American Society of Clinical Oncology from 1976 to 1977. Last year, “Holland-Frei Cancer Medicine,” a reference book he wrote with Dr Emil Frei III, another oncologist who blazed new frontiers in combining cancer remedies, was issued in its ninth edition. It was originally published in 2006.

“Jim Holland is one of the founding fathers of cancer chemotherapy,” said Dr Vincent T DeVita Jr, a Yale professor and former director of the Yale Cancer Centre. “His work confirmed the curative potential of combination chemotherapy.”

The report says Holland acknowledged that while experimenting with drug treatment sometimes amounts to trial and error, the primary killer is typically the disease itself. “The thing to remember,” he said, “is that the deadliest thing about cancer chemotherapy is not the chemotherapy.”

James Frederick Holland was born on 16 May, 1925, in Morristown, New Jersey, to the former Mary Louise Layer and Albert Holland. His father, a county judge, nudged him toward a legal career, but James became mesmerised by biology in high school. He graduated from Princeton in 1944 and earned his medical degree at the Columbia University College of Physicians and Surgeons.

In addition to his son Dr Steven M Holland, who is director of the division of intramural research of the National Institute of Allergy and Infectious Diseases, Holland is survived by four other children from his marriage in 1956 to the former Jimmie Coker, Mary, Sally, Peter and David Holland; a daughter, Diane Louise Holland, from his first marriage, to Lucille Rahe, which ended in divorce; and nine grandchildren. His older brother Albert Jr, who died in 1988, was medical director of the US Food and Drug Administration.

The report says Holland served as an Army Medical Corps captain in Germany after World War II. When his military duty was extended, he was promised a residency at Presbyterian Hospital in Manhattan when a vacancy developed.

Because his father had heart disease, Holland originally gravitated toward a career in cardiology. But what he thought would be an interim job at Columbia University’s newly opened Francis Delafield Hospital, which originally specialised in oncology, proved to be a perfect fit – especially after he met a 4-year-old leukaemia patient, an only child named Josephine. “I had come to love this child, and she loved me,” he recalled in Dr John Laszlo’s “The Cure of Childhood Leukemia: Into the Age of Miracles” (1995). “Her remission was extremely meaningful to me, but by the same token, it was tragic when she relapsed and died.” “She was only a child,” he said. “A crying child.”

Holland later worked at the National Cancer Institute in Maryland. He was only 28 when he became chief of medicine at Roswell Park, where he continued his clinical trials with what is now the John R Oishei Children’s Hospital in Buffalo. The report says he and Dr William Newton of the Children’s Hospital in Columbus, Ohio, were the first to administer two drugs, methotrexate and mercaptopurine, together to treat childhood leukaemia.

In 1973, he established a department of neoplastic diseases at the Tisch Cancer Institute at the Icahn School of Medicine at Mount Sinai, where he was a distinguished professor at his death.

He also inspired the parents of a 21-year-old patient who died to create the TJ Martell Foundation for Leukaemia and Cancer Research, which raised more than $10m for his laboratory.

The report says Holland’s research went beyond leukaemia into breast cancer and other tumours. “If I can get a few more years, I sincerely believe I can help find a cure for other cancers,” he was quoted as saying in “Cancer Crossings” by Tim Wendel (2018). “It’s always a race, you see.”