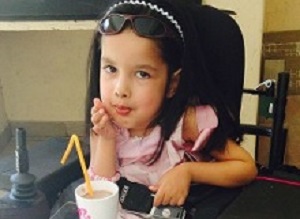 The most common genetic cause of infant death in the world, spinal muscular atrophy (SMA) is a rare condition that occurs in one in 6,000 to one in 10,000 live births. The Sunday Times reports that infants diagnosed with SMA Type I often don’t live beyond 15 months, while children with SMA Type II face severe challenges in standing, sitting, walking, breathing and swallowing. SMA children are not mentally affected, however. In fact, SMA kids are frequently cited as being bright, personable and smart.

The report says until a few years ago SMA was untreatable. Then the US Food and Drug Administration approved a drug named Spinraza, owned by pharmaceutical giant Biogen. Soon videos emerged online of previously stricken patients starting to sit up, hold their heads vertical, and take independent steps.

The report says Spinraza requires an ongoing series of injections into the spinal cord. It’s the only viable SMA treatment, but pharmaceutical giant Novartis is scheduled to enter the market in 2019 with AVXS-101, delivered via a one-off injection. Both drugs address the genetic root cause of SMA, rather than its symptoms.

Tasnim and Muhammed Casoojee were dancing with delight when news broke of the FDA’s Biogen approval. “We were ecstatic,” says Tasnim. “You get your dreams back. All the ones you lost.” Then, she adds: “I also remember staring at our phones when the price came out. We were stunned. Completely stunned.” The first year of Spinraza treatment costs $750,000 (R10.2m), and thereafter the bill is $350,000 (R4.79m) per year. Novartis estimated that its fee for a single AVXS-101 injection would be a staggering $4m (R54.8m).

The report says the Casoojees have travelled a long road with Iman, their nine-year-old daughter, who was diagnosed with SMA Type I as an infant and given a life expectancy of three months. Repeat trips to the US gave the family much valuable medical insight, following which Tasnim started a local version of CureSMA, a not-for-profit organisation. She is also the force behind a South African SMA Whatsapp group – including parents and affected children it has just 42 members.

Since Sprinraza’s FDA approval Tasnim has been interacting with the local agent for Biogen – the company managing the process, likely to be concluded “within a few months”, that will register Sprinraza as a special Section 21 medicine locally. Then comes the tricky bit. Payment.

The report says Spinraza has been turned down by the UK National Health system as too expensive, but has been accepted by the likes of Belgium, Spain, Australia and Canada. South African medical aids such as the Discovery Health Medical Scheme are cautious about their ability to cover it. “We are currently only aware of one medicinal therapy (for SMA), which … is prohibitively expensive, even when considering the small number of patients,” says Dr Noluthando Nematswerani, head of the clinical policy unit at Discovery Health. She goes on to raise the idea of an “industry-wide approach to the funding of treatments for rare conditions, so that medical schemes could share the risk of funding the treatment of these patients between all schemes”.

The report says while industry-wide action sounds positive, there’s an uncomfortable disconnect between the glacial time-frames implied by medical corporate speak and the daily reality of a condition like SMA, where muscle atrophy can accelerate quickly. And, most South African families rely on national health, not medical aid. Here, the prospects for even medium-term access look poor.

Biogen has a special programme designed to open up global access to Spinraza, but South Africa isn’t on that list, and, the report says, the country’s struggling national health system is unlikely to be coughing up millions of dollars for treatments any time soon.

“Introducing such a one-time therapy will require rethinking how health-care systems manage diagnosis, treatment, care and associated costs,” says Sreejit Mohan, global head of external communications at Novartis. He also says that Novartis “will work with country health-care systems to tailor access to address specific needs of local health-care systems and patients around the world”. Mohan does not, however, offer any detail as to how this will happen.

From the Frontlines
February 3rd, 2021

Unlike the Cubans, the supernumerary registrars battle COVID-19 unpaid