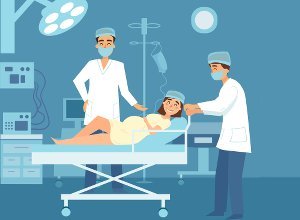 For the women of Brazil's elite, Caesarean sections have long been a status symbol, reports The Washington Post. Now, the phenomenon has inspired an entire industry focused on turning these highly orchestrated operations into wedding-like spectacles, produced for an audience.

The white-gloved women laid chocolates and cakes on silver trays. They filled the crystal vases with roses. Now the guests were arriving. Mariana Casmalla had been buffed, primped and polished in preparation for this moment. She was ready for her C-section.

According to a report in The Washington Post, elective Caesarean sections have long been a status symbol among Brazil’s elite, a way for some of the country’s wealthier women to avoid the unpredictability of natural childbirth. The country has one of the highest rates of Caesarean births in the world – they account for 55.5% of all deliveries in Brazil, spiking to 84% in private hospitals, according to the Brazil Public Health Ministry. The rate in the US for all hospitals is 32.9%.

Now, the report says, the phenomenon is inspiring a new industry of party planners, makeup artists and caterers, focused on turning these highly orchestrated operations into wedding-like spectacles, produced for an audience. The main event: The birth itself, viewed by family and friends from a gallery built for the purpose.

The report says at the Sao Luiz private hospital in Sao Paulo, a mother-to-be can get her hair and makeup done in her hospital room. For 2,000 reais per day – about $500 – her family can rent out the presidential suite, with a living room and bathroom for guests, a balcony and minibar. Mothers can request their favourite flowers and magazines, and even change the furniture if it clashes with their planned decorations. A 22-story maternity ward now under construction will include a wine cellar and ballroom.

“It’s cultural,” Marcia da Costa, the hospital’s director is quoted in the report a saying. “Brazilians want to plan for everything. They don’t want to hit traffic on the way to the hospital. They want to get their nails done, get a wax, to plan it like an event.” Still, da Costa and other health professionals are ambivalent.

The World Health Organisation has long campaigned to reduce elective C-sections, which are nearly twice as deadly for mothers than natural births and require longer recovery times for mothers and babies.

The report says in Brazil, public health officials and some of the country’s top doctors have worked to cure the upper class of its penchant for the procedure.

Costs vary, but C-sections are generally more expensive than natural childbirths. While the risk of maternal death in well-equipped private hospitals is low, haemorrhage and infection are more likely in an elective Caesarean than in a natural birth. For babies, C-sections have been linked to higher rates of respiratory distress, diabetes and high blood pressure.

According to the report, the WHO estimates that about 10% of births require a C-section. “Here we had the opposite statistics,” said Rodrigo Aguiar, a director at Brazil’s National Supplementary Health Agency, which regulates private hospitals. The numbers were even more pronounced during the holiday months, he said, when women and doctors called for elective C-sections before the baby was ready to be born. This led to higher rates of respiratory problems for infants and prolonged hospital stays for both mothers and babies.

“We saw that we had to re-evaluate these percentages and make sure that birth decisions were being geared toward the health of the mother and the child, and not for convenience,” Aguiar said.

The report says Brazil’s Health Ministry has taken steps to reduce what it calls the Caesarean “epidemic.” In 2016, the government banned medically unnecessary C-sections before 39 weeks. Brazilian women historically have had good reason to fear natural birth. The country’s overwhelmed public health system meant that doctors and nurses lacked the resources to closely monitor women through hours of labour. C-sections allowed the staff to closely monitor mothers for a shorter amount of time.

At private hospitals, the procedure has gained favour both among mothers – who want their personal doctors, not the on-call staff at the hospital, to deliver their babies – and among doctors juggling busy schedules. Olímpio de Moraes Filho, a member of the Brazilian Federation of Obstetrics and Gynecology, says in the report that Caesarean sections fit some lifestyles. “C-sections today are much safer than they were 30 years ago,” he said. “Things are changing. Women are in the job market. Couples are trying to schedule a moment when the family can get together.”

At the Albert Einstein Maternity Hospital in Sao Paulo, the report says the party starts before the baby is born. A frosted window looking into the operating room turns transparent for the surgery, allowing guests to see the moment of the birth. As Casmalla was wheeled to her operating room, 15 of her closest family members and friends trailed behind. They gathered around the window, ears pressed to the wall, listening for the baby’s first wail.

The report says Paula Ascar Baracat is co-founder of Estudio Matre, a party-planning service that specialises in maternity wards. She says new mothers increasingly prefer receiving guests at the hospital, rather than at home. “The mom has just given birth, she is learning to breast-feed, she doesn’t want to entertain at home,” Baracat said. “So, while she’s getting ready for the birth, we are getting ready to host.” Baracat’s clients spend upward of $10,000 for services that include floral arrangements, guest books, monogrammed sheets, personalised water bottles, and silver-plated favours for guests.

The report says women who have natural births often seek these services, too. Nina Materna, another party-planning service, has three hotlines that women can call as they go into labour. The company promises to have fully sterilized decorations up within eight hours. But C-sections allow mothers another level of planning.

In 2015, Linus Pauling Fascina, director of the maternity ward at Einstein, called together doctors, doulas, midwives, feminist activists and government officials to discuss ways to increase the rate of natural births in Brazil’s private hospitals. The group launched the Appropriate Birth Project, a partnership with 35 hospitals to prioritise natural deliveries among the country’s elite.

The report says one of their first steps was to bring the luxury and family experience associated with Caesareans to natural childbirth. Einstein hospital opened five new natural-birth centres with private showers and tubs. At Sao Luiz, women giving birth naturally can choose the colour of the lighting of their in-room whirlpool bathtubs. Fairy lights on the ceiling can turn blue or red, depending on the mood of the patient. All rooms are equipped with MP3 players that patients can load with personalized playlists.

The report says results came quickly. In four years, the rate of natural births at Einstein rose from 18% to nearly 50%. The programme has expanded to more than 200 hospitals. “The changes have to be concurrent for everyone: women, their families, their workplace, doctors, nurses,” Fascina said. “When the husband comes in and says, ‘I’m working, I need to know the date of the birth’ – it’s about learning to plan for the unplannable.”

The report says for Bruna Viera, 32, a natural birth was always out of the question. “It doesn’t fit with our lifestyle,” she said. “I’m a doctor, and my husband is, too. We have a very planned life and had to take vacation for the baby to be born.”