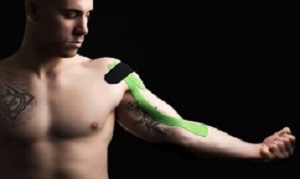 Hoping to gain a competitive edge has made weekend warriors and elite athletes, both, vulnerable to pseudoscience and dodgy marketing, writes Digital Clubbing Power Bracelet-shunning columnist Alistair McAlpine in MedicalBrief. He assesses the evidence for Kinesio tape, compression socks, and dry needling.

Whether a hardy weekend warrior, or an athlete at the peak of their game, we all like to perform better at our chosen sport. It may be improving our personal best running time by a few seconds, or dropping the golfing handicap, or – in the case of the elites – bringing home a coveted winner’s medal. In addition, because many sports have an element of luck to them, sportsmen and women are often very superstitious; once an athlete has convinced themselves that some ritual or product is helping them, it can be nigh-on impossible to persuade them otherwise.

Producers know this, and as a result, sportsmen and women are bombarded by marketing and advertisements claiming that this or that product will provide the much-needed ‘edge’ to beat out the competition. And because sport, especially toward the elite end, is often about tiny margins of difference, anything that can provide assistance is often embraced, regardless of the science behind it.

To many, especially kids, top sportsmen and women are akin to the gods of Olympus. I remember being completely star-struck as a little boy when South African test bowler Allan Donald signed my cricket ball at the Wanderers during a match against Australia. If he had told me that rubbing special trademarked ‘Donald Cream’ on my chest was going to make me more like him, I would’ve been first in line at the store.

So, the toxic mix of an earnest desire to improve, combined with a predisposition and bias towards certain products, topped with incredibly dodgy marketing ploys involving athletes, means that sport, and sporting practices, are rife with pseudoscience and snake oil. It would be impossible to cover everything in one article, and some have mercifully fallen by the way-side (remember those ridiculous ‘Power Bracelets’?), but below are some of the more popular equipment and practices used by athletes. The question is: do any of them work?

Kinesio Tape (KT): Anyone who has watched any sporting events, or run a road race recently, would have noticed the presence of brightly coloured tape that some athletes wear. This tape is stretchy and can go anywhere, but typically adorns shoulders, calves and hamstrings. It is easy to apply and remove, and instantly recognisable. It’s called ‘Kinesio Tape’ (or some variation thereof) and was invented by a Japanese American chiropractor (remember those?) who claimed that the recoil of the tape helped to keep muscles aligned.

While there is evidence that taping an injured muscle may temporarily improve its performance, this can be done with bog-standard tape – no expensive ‘kinesio’ aspect needed. But since its invention, all sorts of additional claims have been made about KT: that it ‘lifts the skin’ to permit blood and lymphatic flow, and that it improves pain control by reducing pressure on the nerves. It really came to prominence in the 2008 and 2012 Olympic Games, where famous athletes were seen wearing it.

Studies on the tape have consistently shown that it has no effect on either athletic performance, or recovery time.(1) It also provides no benefit in preventing injuries (2), or improvement in recovery times in those with existing ones.(3) Hilariously, a study in 2016 looked at whether the tape had any subjective effect on the trapezius muscle of athletes, and while the KT itself did nothing, the colour was noted to affect the feelings of those wearing it.

One manufacturer of KT, ‘KT Health’, was recently the subject of a class-action lawsuit because of their exaggerated claims about the benefits of KT. They settled without admitting wrong-doing, but the point remains that there is huge discrepancy between the producers’ claims about the tape, and its actual benefit.

Bottom line, if you want the benefit of taping a muscle, any tape will do. But if you want to look colourful during an event, and have money to burn, then KT is for you!

Compression Socks: Many runners have switched from the usual short running sock, to the longer compression version. The socks work by having a ‘graduated’ pressure system (they are tighter at the bottom and looser at the top), which prevents ‘backflow’ of blood down the leg when the calf muscle is relaxed. The idea is that this will return blood more efficiently to the heart and reduce lactic acid build-up. Compression socks have been widely used for venous stasis ulcers and varicose veins, where the evidence for their use is strong. The question is: do compression socks benefit healthy runners with normal venous systems in their legs?

There aren’t a whole lot of studies, but the ones we have suggest that while the socks provide no improvement in performance (you won’t run any faster or further), they may have a mildly beneficial effect on recovery times, with reduced pain in the post exertional period.(4) It’s important to note that this finding was often not replicated, with many studies finding no benefit at all, either in performance or recovery. The ‘tightness’ of the sock didn’t seem to really matter, nor whether it covered the knee or not.

All in all, the evidence seems to suggest a modest benefit post-exercise, but hardly game-changing stuff. Definitely a case of discovering individual preference.

Cupping: In the 2017 Olympic Games, Michael Phelps was noted sporting unusual, round bruises over his back. Speculation about the nature of these was rife until it was revealed that Phelps (and other athletes) had undergone ‘cupping’. And suddenly, this ancient practice was back in the spotlight. But what is cupping? And can it realistically help you?

Unlike compression socks, which may have valid science behind them, cupping is straight-up quackery. It originated as a form of blood-letting, whereby ‘chi’ – or the energy within blood – was drawn to the surface by placing a heated glass cup over the skin, and then allowing it to cool, which would create a vacuum and thereby draw the skin into the cup. Once drawn, the ‘cupped’ skin would be lanced and the blood allowed to flow out, thereby removing ‘stagnant’ or ‘contaminated’ energy. This practice persists today as ‘wet’ cupping. ‘Dry’ cupping is identical, except the skin isn’t lanced. Both are still fairly widely available, with a trend towards ‘dry cupping’ by some physiotherapists and traditional healers.

Before we even look at the evidence for this, we need to acknowledge that it simply has no plausible physiological reason to work. We know that concepts like ‘blood energy’ and ‘stagnant flow’ are pre-scientific ideas with no basis in reality. But because pseudoscientists are a wily lot, they have shifted the goal posts, and now claim that it ‘improves circulation’ and ‘relaxes muscles’.

But bruising is simply ruptured blood vessels beneath the skin. Quite how destroying capillaries by giving someone a massive artificial love bite (or ‘hickeys’ as they were called in my youth) ‘improves circulation’ has yet to be explained.

Scientists, however, are nothing if not a rigorous lot, and studies have been done, but most of them are of very poor quality, with a high element of bias (performed by Chinese alternative healers), so drawing firm conclusions is difficult.(5) Generally, though, the better quality studies have shown no benefit.

Dry needling (DN): Many athletes are fans of dry needling after intense work-outs. They claim it reduces pain and aids recovery time. And many physiotherapists (who should be practicing evidence-based physiotherapy) encourage or promote DN. Usually, they themselves are the ones who do it, for a hefty fee…

Essentially acupuncture in new clothes, dry needling works on the exactly the same principle as acupuncture, except instead of inserting needles into pressure points to activate chi (life force), needles are inserted into ‘myofascial trigger points’ which apparently trigger a local twitch response and cause the release of endogenous opioids. Totally different from acupuncture. Totally.

But as always, something can work even if we don’t fully understand the mechanism. A recent meta-analysis was remarkable because it demonstrated that DN was less effective than placebo in reducing pain (which is rather extraordinary, if you think about it).(6) Another noted that, ‘(DN) did not have a positive effect on function, quality of life, depression, range of motion, or strength.’(7) In other words, people are being taken for a ride. That involves sharp needles.

Perhaps the most disappointing aspect to the DN saga is that a number of so-called reputable physiotherapists in South Africa who offer it. Given that physiotherapy is supposed to be rooted in the real world, and offer evidence-based interventions, this is particularly disappointing.

So, all in all, we can see that a number of practices and products that have become almost ubiquitous in the sporting world have little to no evidence supporting them. If you make use of any of the above, and are happy with what they do for you, that’s absolutely fine. But it’s important to note what happens when we remove bias and slick marketing from the equation. Because that’s often what we are fooled by: we so desperately want that edge or advantage, that we convince ourselves we’ve found it. When all we’ve actually found is an effective way to lighten our wallets.

It’s now your right to smoke marijuana — but don’t bluff yourself that it cures anything SA’s stem cell industry: Preying on the gullible, facilitated by med schemes The ketogenic diet is no cure for cancer, despite what the cranks say SA’s private pharmacies are Gollums, not trusted gatekeepers The ‘sheen of respectability’ that surrounds chiropractic Big Pharma and naturopathy — ‘unholy allies’ in the supplementation scam McAlpine: Noakes spread dangerous and untrue information about vaccines Aided by the likes of Noakes, anti-vaxxers are causing real damage A smorgasbord of pseudo-science but lessons for GPs The simple but profound values of dying children in their final days Noakes: ‘A litany of specious comments and errors’