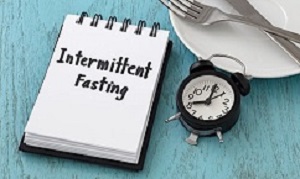 Intermittent fasting has been around since Pythagoras but has now reached new heights of popularity because of extravagant claims by the likes of Dr Jason Fung, a Canadian nephrologist, and self-labelled ‘world expert’ on IF, writes MedicalBrief's Alastair McAlpine writes in his Digital Clubbing column.

When I was growing up, it was conventional wisdom that we should all eat five small meals per day. The logic dictated that three large meals were simply not providing us with enough food, and that two extra snacks were required between these meals to stop us all from collapsing with hypoglycaemia,

It has now become apparent that for the majority of us, this way of constant ‘grazing’ is neither feasible nor healthy. In response, a number of scientists and weight-loss gurus have claimed the benefits of ‘intermittent fasting’ (IF). They claim (usually in reference-free diet books) that IF will do everything from re-energising you, to making the weight melt off, to reducing your risks of cancer. The question remains: is there any truth to this? Or are they simply exploiting the latest dietary fad?

Fasting is not a new concept: Pythagoras was one of the first in recorded history to extol its virtues, claiming it ‘clarified the mind’. In the 19th and early 20th centuries, fasting clinics popped up throughout the UK and US, purporting to treat heart disease, high blood pressure, obesity, digestive problems, allergies and headaches. As fasting fell out of favour with conventional medicine, its popularity among alternative healers persisted, with many claiming it ‘mitigated the effects of toxic daily living.’ Many religions have periods of fasting (the most famous of which is probably the month of Ramadaan for followers of Islam) as part of their tenets.

There are many ways to intermittently fast, but the two most popular strategies are: periodic fasting (PF) and alternate day fasting (ADF). PF is where participants eat their normal diet for a certain number of days, then fast for a period. The fasting days usually include a single meal which meets about 25% of daily caloric requirements. One of the more popular versions of PF is ‘5:2’ fasting (where participants eat a normal diet for five days of the week, then fast for two days). ADF is similar to PF, except participants alternate days of normal eating and days of fasting. As for PF, the fasting days usually include a single meal. There are countless variations on the theme, however. Some people advocate prolonged fasts of 24 hours or more. Some individuals adopt a ‘time restricted’ eating period, where they only have meals during a set period of the day (usually an eight-hour window).

There is evidence, in rat populations, that IF can have beneficial effects on glucose control, cardiovascular status, and neurological functioning. These benefits go beyond the simple effects of reduced caloric intake and weight loss, and are usually related to changes in hormones and their associated receptors. Specifically, reduction in insulin production, and beneficial changes to adiponectin, corticosteroid, and leptin levels have been noted. In addition, IF appears to ameliorate mitochondrial stress, reduce mTOR signaling, and reduce inflammation.(1)

Unfortunately, these results haven’t yet been adequately replicated in other species. When we look at the evidence for fasting in humans, it is extremely sparse and far less convincing than the rodent data. The reasons for this are fairly obvious: humans and rats have very different metabolisms. In addition, we can force rats in captivity to fast by depriving them of food. We can’t do this on humans, so we’re forced to educate them and then take their word for it. The downside is that there is good evidence that when calories are properly tracked, people eat more than they claim they do on their fasting days, and then overeat on the regular days, which obviously reduces the purported benefits of IF.

Nevertheless, the American Heart Association recently looked at 10 short-term studies and found that intermittent fasting produced a weight loss of 3–8% over the course of 3–24 weeks. On average, ADF produced weight loss of 0.75 kg/week, whereas PF produced weight loss of 0.25 kg/week. This discrepancy appears to be due to the total number of fasting days (3–4 days/week in ADF and 1–2 days/week in PF), and the corresponding differences in energy intake.(2) Furthermore, one of the studies noted beneficial effects on total cholesterol (-6 to 21%), low-density lipoprotein (LDL) cholesterol (-7 to 32%) and triglycerides (-16 to 42%).(3) This finding was not replicated in other studies, and is confounded by the effect of weight loss. These studies are limited by the fact that none of them compared IF to other forms of calorie restriction.

There are very few studies directly comparing IF to other weight-loss strategies. The longest and most robust of them has been covered by MedicalBrief. It lasted for one year and had three arms. It compared people on ADF, people on regular caloric restriction, and a control group. After one year, weight loss was similar between intervention groups (-6.0% in ADF and -5.3% in traditional calorie restriction).(4) There were no significant differences between the intervention groups in blood pressure, heart rate, triglycerides, fasting glucose, fasting insulin, insulin resistance, C-reactive protein, or homocysteine concentrations. Mean LDL cholesterol levels were significantly elevated by month 12 among the participants in the alternate-day fasting group (11.5 mg/dL) compared with those in the daily calorie restriction group.(4) In diabetics, a review concluded that while IF showed promising results for glycaemic control, it was no superior to regular caloric restriction.(5)

In terms of time restricted fasting plans, there is some evidence that they may offer mild benefit over simple caloric restriction in terms of weight loss and blood pressure.(6) A study on athletes doing resistance training showed mixed results (fat mass and some biomarkers were improved, but testosterone deceased), but the strategy certainly didn’t appear to be harmful.(7)

What about side-effects? While some adherents claim to feel energised and focused, many others have reported fatigue, brain-fog, irritability and generalised weakness. Dehydration can be a problem and the prolonged ketosis has caused headaches in many. Some adherents tend to binge on the ‘regular’ days, which is unhealthy. There is also the issue of long-term sustainability. Simply put, fasting generally involves being hungry for prolonged periods of time, and for many, this is simply unsustainable in the long-run. This has been borne out in studies which consistently show high drop-out rates in the fasting groups.(4)

There are still many unanswered questions about IF. Are the effects noted simply a result of caloric restriction (individuals are simply consuming less calories overall)? Or is there some unique metabolic advantage? The majority of studies performed thus far failed to include a caloric-restricted arm, which makes answering this important question very difficult. In addition, what is the best way to fast? ADF? PF? And when exactly should people eat? Is the timing of meals of any importance? Furthermore, are there any specific groups (people with obesity, or diabetics) who could benefit more than others? What are we to make of the high LDL cholesterol in the long-term study? Is the diet perhaps dangerous for some? 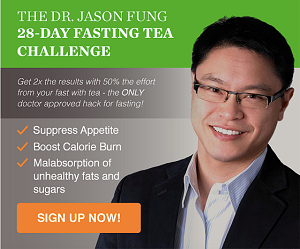 In light of all the paucity of human data, and the outstanding issues listed above, it would be reasonable to assume that the medical establishment would take a conservative and cautious approach to IF. This has mostly been the case.

There are, unfortunately, those who exaggerate the benefits, and minimise the risks to sell you stuff. Lead among these is Dr Jason Fung, a Toronto- based nephrologist, and self-labelled ‘world expert’ on IF. He is also the author of three books on fasting, and has claimed the strategy is useful for everything from diabetes reversal to cancer management.

When Fung is not fat-shaming respected colleagues, he is appearing on the blog of some of the world’s biggest quacks. When he’s not spouting nonsense about cancer (and falsely claiming cancer deaths are going up, ignoring the last 30 years of data which show they’re coming down), he’s promoting dubious green tea products (which he is paid for). This despite a comprehensive Cochrane Collaboration meta-analysis that shows they have no statistical effect on weight loss.(8) As the tweet below shows, Fung is a fan of calling out colleagues for conflicts of interest. Perhaps he should look in the mirror?

As a self-styled ‘expert’, one would expect that Fung has produced tons of original research, perhaps even a PhD thesis, on the topic. Yet a PubMed search reveals a single, small case series report which he supervised.(9) This has not stopped the mainstream media from lavishing uncritical puff-pieces over him, without even the most basic of fact-checking of his claims.

Fung is not the only person promoting IF as a cure-all for everything from obesity to cancer. But he is emblematic of the problems that beset these physicians: exaggerated claims, based on shaky evidence, gleefully promoted by sycophantic pals and uncritically propped up by a credulous media. As with many others, Fung offers a life-style programme called ‘Integrated Dietary Management’ (for just $39 per month!). Predictably, the slick webpage is thick on testimonials and thin on science. Remember, folks: they’re always trying to sell you something.

The truth is, while there is a lot of interesting potential to IF, the science simply doesn’t exist yet for evidence-based clinicians to be whole-heartedly recommending it to their patients. There are simply too many unanswered questions and unestablished safety profiles. Even with support, long-term adherence is poor and some side effects are alarming. Is it an interesting idea worthy of more research? Absolutely. Could it become a tool for the obese and diabetic to manage their conditions? Probably. But much work needs to be done until we get there. In science, where there’s doubt, there are always folks looking to exploit the unknown. They offer easy solutions to complicated health problems. If you are going to consistently deprive yourself of something, however, you should probably start with these hucksters exploiting the desperate to make a quick buck. That particular fast can be permanent.

An uncritical Forbes article on Fung
Is Fasting The Cure For Bloated Healthcare Costs?

Instead of gaining an edge, many competitors lose the plot

Instead of gaining an edge, many competitors lose the plot

The ketogenic diet is no cure for cancer, despite what the cranks say

The ketogenic diet is no cure for cancer, despite what the cranks say

The ‘sheen of respectability’ that surrounds chiropractic

The 'sheen of respectability' that surrounds chiropractic

Big Pharma and naturopathy — ‘unholy allies’ in the supplementation scam

Big Pharma and naturopathy — 'unholy allies' in the supplementation scam

Aided by the likes of Noakes, anti-vaxxers are causing real damage

Aided by the likes of Noakes, anti-vaxxers are causing real damage

A smorgasbord of pseudo-science but lessons for GPs

A smorgasbord of pseudo-science but lessons for GPs