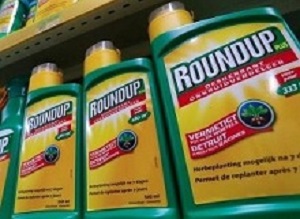 A landmark suit against Monsanto about the alleged cancer risks of the company’s popular weedkiller, Roundup, has started in San Francisco.  Thousands have brought similar legal claims across the US.

Dewayne Johnson said that if he had known what he knew now about Roundup weedkiller, “I would’ve never sprayed that product on school grounds … if I knew it would cause harm … It’s unethical.” The Guardian reports that Johnson, a former school groundskeeper in northern California who is terminally ill, was testifying in his landmark suit against Monsanto about the cancer risks of the company’s popular weedkiller. He is the first person to take the agrochemical company to trial over allegations that the chemical sold under the Roundup brand is linked to cancer.

The report says he spoke for the first time during the trial in San Francisco, detailing his use of Monsanto’s products, his extensive exposure to herbicides, and his belief that the chemicals caused non-Hodgkin lymphoma (NHL), a blood cell cancer. He also described the suffering he endured as skin lesions took over his body. “I’ve been going through a lot of pain,” said Johnson, a father of three who goes by the name Lee. “It really takes everything out of you … I’m not getting any better.” His doctors have said he may have just months to live.

Johnson’s lawyers have argued in court that Monsanto has “fought science” over the years and worked to “bully” researchers who have raised concerns about potential health risks of its herbicide product. At the start of the trial, the attorneys presented internal Monsanto emails that they said revealed the corporation’s repeated efforts to ignore expert’s warnings while seeking favourable scientific analyses and helping to “ghost-write” positive papers.

The report says thousands have brought similar legal claims across the US, and a federal judge in California ruled this month that hundreds of cancer survivors or those who lost loved ones can also proceed to trial. Johnson’s case has attracted international attention, with the judge allowing his team to present scientific arguments about glyphosate, the world’s most widely used herbicide.

The report says Monsanto has continued to assert that Roundup, which is registered in 130 countries and approved for use on more than 100 crops, is safe and not linked to cancer, despite studies suggesting the contrary. Notably, the World Health Organisation’s International Agency for Research on Cancer (IARC) classified glyphosate as “probably carcinogenic to humans” in 2015, a decision that has been central at the trial.

The report quotes Monsanto as saying that studies that have found Roundup is safe. They said: “We have empathy for anyone suffering from cancer, but the scientific evidence clearly shows that glyphosate was not the cause.”

May 12th, 2021
A doctor guilty of failing to take a patient's pre-operative history, as well as neglecting to monitor blood...
Medico-Legal

May 12th, 2021
At request of her family an Illinois judge has ordered that a comatose woman suffering from COVID-19 to be...