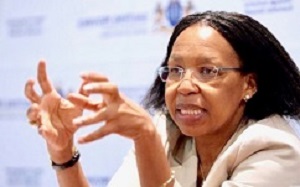 At least 94 people died after Gauteng Health moved 1,900 psychiatriac patients out of Life Esidimeni to 27 unlicensed facilities, says SA’s Health Ombudsman, Professor Malegapuru Makgoba, in an explosive report. Patients died of starvation and lack of water, with the number of fatalities provisional, since bodies remain unidentified in morgues.

Makgoba, has identified Gauteng MEC for Health Qedani Mahlangu as a key player in the movement of mentally ill patients from the Life Esidimeni Health Care Centre to the NGOs where they died.

An IoL report quotes Makgoba as saying at the release of his much awaited report: “Available evidence by the expert panel and the Ombud showed that a high level decision to terminate the Life Esidimeni Health Care Centre contract precipitously was taken, followed by a programme of action with disastrous outcomes/consequences including the deaths of assisted mental health care users.”

The report says the Ombud identified three key players in the project – MEC Qedani Dorothy Mahlangu, head of department Dr Tiego Selebano and director Dr Makgabo Manamela at times referred to as dramatis personae in the text [the report]. “Their fingers are peppered throughout the project. The decision was reckless, unwise and flawed, with inadequate planning and a chaotic and rushed or hurried implementation process,” Makgoba noted.

Makgoba said in contrast to the widely-reported figure of 36 patients, at least 94 psychiatric patients died between 23 March and 19 December last year in Gauteng. “I want to emphasise that this is a provisional number and the actual number could be more,” Makgoba said.

“All the 27 NGOs to which patients were transferred operated under invalid licences, therefore all patients who died in these NGOs died in unlawful circumstances.”

The report says the more than 1,000 patients were transferred from the Life Esidimeni Health Care Centre to the NGOs in 2015, and 36 of them died within three months of the transfer.

The official report was scheduled to be released three weeks ago, but was delayed after Mahlangu requested more time to study the report.

Jack Bloom DA Gauteng Shadow MEC for Health said that he was shocked to the core by the revelation that 94 psychiatric patients died (and possibly more) after their transfer last year from Life Healthcare Esidimeni.

He says: “Health MEC Qedani Mahlangu lied to me in the Gauteng Legislature on 13 September last year when she said that 36 patients had died in the NGOs in which they were placed. Health Ombudsman Malegapuru Makgoba said that on that date 77 patients had already died.

“Premier Makhura has to fire Mahlangu and ensure that disciplinary action is taken against the 11 senior health department officials identified in the report. Criminal charges should also be laid against all implicated parties including those in the five NGOs where 80% of the patients died.

“Premier Makhura must also ensure that immediate steps are taken to ensure the safety and well-being of all the patients who are still with the NGOs. Makura’s image has taken a severe blow because of his failure to fire Mahlangu earlier and to replace her with a competent and caring Health MEC.

“This is a crisis for the ANC in Gauteng and all those who failed to act earlier against Mahlangu. I will study the full report and monitor the actions based on its findings.”

There’s widespread speculation around whether Mahlangu will resign in the wake of the damning findings, reports Eyewitness News. Last month, the Health Department said it was unaware of reports that 80 psychiatric patients died after being transferred from Esidimeni.

The department says that according to their records, the number of patients who died during transfers still stands at least 36. Spokesperson Steve Mabona is quoted in the report as saying they have always been consistent about the number of deaths.

“We are not aware that the report has been released but one can really put the emphasis that, as the department, we are very consistent in the number that we revealed. We revealed the number 36.”

The NGOs were overcrowded and some did not have qualified staff with the requisite skills for the patients. This was in addition to a lack of safety and security and even proper heating in winter.

Families travelled from across the province to hear the details of why their loved ones died. One woman was sobbing as Makgoba spoke‚ shaking her head and wiping tears away.

Join Dr Anthony Fauci for a webinar: The Pandemic – North, South and forward

Finding the 'right' GP: A qualitative study of people with long-COVID