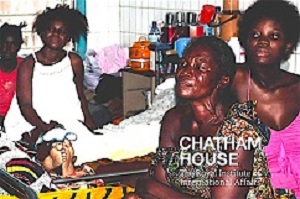 Hospitals in sub-Saharan Africa and Asia are detaining hundreds of thousands of people against their will every year – many of them mothers and their new-born babies – simply because they are too poor to pay their medical bills, a Chatham House study has found. The practice, sees patients chained to drainpipes, starved and abused, and forced to perform sexual acts in exchange for cash to pay off their bills, according to the research.

Campaigners are calling on the global health community to take immediate action against medical detentions. “This is a systemic problem, and the number of rights abuses is quite profound: people are being detained without trial, they’re being locked up with security guards, and women are giving birth to babies who are entering the world, in effect, as prisoners,” said Robert Yates, project director at the Centre on Global Health Security, who co-authored the paper.

“Healthcare user fees are at the root of the problem, and this just shows how bad a privately financed health system can get. We need to do more research on this and the global health community needs to start taking this seriously.” The report says while exact numbers of medical detentions are unknown, in some countries the practice is so common that patients consider it “normal” for hospitals to detain those who cannot pay their bills.

Politicians have used it to their advantage in the run-up to elections. Recently in Nigeria, an aspiring governor paid off a number of patients’ bills at a public hospital in Osun state, while the wife of a state governor in Abia showered nursing mothers with gifts, and paid off their bills after visiting them in a hospital presided over by her husband.

Those most at risk of being detained are the poorest people, according to the paper, among them those needing emergency treatment and pregnant women, with many of them resorting to desperate tactics in order to escape detention.

Over a six-week period in 2016 in one health facility in the Democratic Republic of the Congo, 54% of women who had given birth and were eligible for discharge were detained for nonpayment of user fees, according to the study, with many women and children held for months at a time. In a Nairobi hospital in Kenya, women who had been detained post-childbirth for fees amounting to 210,000 shillings (around R25,000), were having sex with doctors for as little as 300 shillings in order to pay off their bills.

“Healthcare really needs to be free of charge to the patient, because this is the consequence of making patients pay, and it is the worst situation in a whole range of very difficult situations: they may get the medical care they need but then they, or their belongings or their ID papers, are kept hostage,” said Mit Philips, health policy advisor at Doctors Without Borders (MSF).

“Unfortunately, because many of these health facilities don’t receive sufficient funding to provide adequate care even when patients can afford to pay, this is the kind of economic logic that results. If we’re serious about universal health coverage, then abolishing user fees would be a good place to start.”

Campaigners have called for national leaders to ban medical detentions and prosecute the hospitals that imprison their patients, as well as reform their health financing systems towards publicly financed universal health coverage. The paper cites Burundi as a clear example of how the abolition of user fees can improve health services, as public finance to hospitals and the provision of free maternity services saw deliveries in health units quadruple and infant mortality decline by 43% within five years.

“But we’re just seeing inaction around this across the world. This is the most grotesque violation of people’s rights that you could imagine, and progress is far too slow for what is a very urgent need.”

Summary
In some parts of the world it is common practice for patients to be detained in hospital for non-payment of healthcare bills.
Such detentions occur in public as well as private medical facilities, and there appears to be wide societal acceptance in certain countries of the assumed right of health providers to imprison vulnerable people in this way.
The true scale of these hospital detention practices, or ‘medical detentions’, is unknown, but the limited academic research to date suggests that hundreds of thousands of people are likely to be affected every year, in several sub-Saharan African countries and parts of Asia. Women requiring life-saving emergency caesarean sections, and their babies, are particularly vulnerable to detention in medical facilities.
Victims of medical detention tend to be the poorest members of society who have been admitted to hospital for emergency treatment, and detention can push them and their families further into poverty. They may also be subject to verbal and/or physical abuse while being detained in health facilities.
The practice of detaining people in hospital for non-payment of medical bills deters healthcare use, increases medical impoverishment, and is a denial of international human rights standards, including the right not to be imprisoned as a debtor, and the right to access to medical care.
At the root of this problem are the persistence of health financing systems that require people to make high out-of-pocket payments when they need healthcare, and inadequate governance systems that allow facilities to detain patients.
Universal health coverage (UHC) cannot be achieved while people are experiencing financial hardship through their inability to pay for healthcare, so by definition any country that allows medical detention is failing to achieve UHC.
Health financing systems should be reformed by moving towards publicly financed UHC, based on compulsory progressive pre-payment mechanisms. This would enable hospitals to become financially sustainable without the need to charge significant user fees.