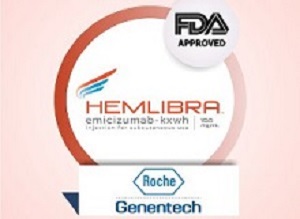 The HAVEN 3 study, led by a University of the Witwatersrand researcher, found that emicizumab prophylaxis (trade name: Hemlibra) administered subcutaneously once weekly or every two weeks led to a significantly lower bleeding rate.

People with haemophilia bleed spontaneously or following trauma. The most common sites of bleeding are into joints, but bleeds can also happen into any tissue in the body, including the muscles, brain, or eyes. Many bleeds can be life-threatening, organ-threatening or fatal. Haemophilia affects only males because it is an X-linked condition (males have one X chromosome, whereas females are obligate carriers as they have two X-chromosomes).

To treat haemophilia A, the missing clotting factor VIII must be replaced. The replacement therapy is given prophylactically (as a preventative measure) to prevent spontaneous bleeds.

However, there are two challenges: FVIII replacement is done intravenously and many patients – especially children – have difficulty accessing veins; the FVIII may elicit an immune response in which antibodies are formed towards the replacement FVIII, thus rendering the replacement useless and incapable of stopping the bleeding.

In the multi-centre, global HAVEN 3 study, patients aged 12 years and older were given a skin (subcutaneous) injection of new protein called emicizumab, which performs the same function as the missing FVIII. The injections were administered weekly in one group, every second week in another group, and then the patients’ number of bleeds measured when compared to those not receiving emicizumab.

“Subcutaneously administered emicizumab reduced the bleed rate by 96% in those getting weekly emicizumab and by 97% in those receiving fortnightly emicizumab when compared to those not receiving emicizumab,” says Professor Johnny Mahlangu, clinical haematologist and lead author of the study. ‘

Mahlangu is head of the School of Pathology in the faculty of health sciences at the University of the Witwatersrand and head of the haematology diagnostic section in the department of molecular medicine and haematology at the university. Furthermore, 56% of patients receiving weekly emicizumab and 60% of those receiving fortnightly emicizumab did not experience any bleeding events whilst receiving emicizumab. For patients already on prophylaxis, there was 68% reduction in bleed rate on emicizumab when compared to the normal FVIII prophylaxis.

“Hemlibra (the trade name of emicizumab) is a prescription medicine used to prevent or reduce the frequency of bleeding episodes in adults and children with haemophilia A with factor VIII inhibitors. In the HAVEN 3 study, Hemlibra showed a significant and clinically meaningful reduction in bleeds in people with haemophilia A without factor VIII inhibitors, while offering flexible subcutaneous dosing options,” says Mahlangu.

Abstract
Background: Emicizumab is a bispecific monoclonal antibody that bridges activated factor IX and factor X to replace the function of missing activated factor VIII, thereby restoring hemostasis. In a phase 3, multicenter trial, we investigated its use as prophylaxis in persons who have hemophilia A without factor VIII inhibitors.
Methods: We randomly assigned, in a 2:2:1 ratio, participants 12 years of age or older who had been receiving episodic treatment with factor VIII to receive a subcutaneous maintenance dose of emicizumab of 1.5 mg per kilogram of body weight per week (group A) or 3.0 mg per kilogram every 2 weeks (group B) or no prophylaxis (group C). The primary end point was the difference in rates of treated bleeding (group A vs. group C and group B vs. group C). Participants who had been receiving factor VIII prophylaxis received emicizumab at a maintenance dose of 1.5 mg per kilogram per week (group D); intraindividual comparisons were performed in those who had participated in a noninterventional study.
Results: A total of 152 participants were enrolled. The annualized bleeding rate was 1.5 events (95% confidence interval [CI], 0.9 to 2.5) in group A and 1.3 events (95% CI, 0.8 to 2.3) in group B, as compared with 38.2 events (95% CI, 22.9 to 63.8) in group C; thus, the rate was 96% lower in group A and 97% lower in group B (P<0.001 for both comparisons). A total of 56% of the participants in group A and 60% of those in group B had no treated bleeding events, as compared with those in group C, who all had treated bleeding events. In the intraindividual comparison involving 48 participants, emicizumab prophylaxis resulted in an annualized bleeding rate that was 68% lower than the rate with previous factor VIII prophylaxis (P<0.001). The most frequent adverse event was low-grade injection-site reaction. There were no thrombotic or thrombotic microangiopathy events, development of antidrug antibodies, or new development of factor VIII inhibitors.
Conclusions: Emicizumab prophylaxis administered subcutaneously once weekly or every 2 weeks led to a significantly lower bleeding rate than no prophylaxis among persons with haemophilia A without inhibitors; more than half the participants who received prophylaxis had no treated bleeding events. In an intraindividual comparison, emicizumab therapy led to a significantly lower bleeding rate than previous factor VIII prophylaxis.