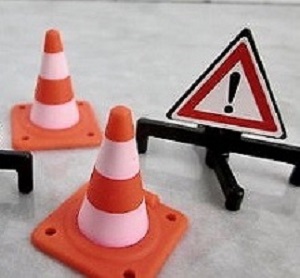 A toy traffic cone has been found in the lung of a man 40 years after he inhaled it. The Guardian reports, however, that it was originally thought that the unnamed 47-year-old man from might have cancer.

He was referred to a respiratory clinic after complaining of coughing up yellow mucus and feeling unwell for over a year. Medics initially thought the patient, who had also recently suffered pneumonia and had been a long-term smoker, had a tumour after an x-ray showed a mass in a lung. However, during a bronchoscopy, which was carried out to help aid diagnosis, they realised it was a “long-lost Playmobil traffic cone” the patient had received on his seventh birthday. The miniature plastic cone, about 1cm in length, was removed with biopsy forceps.

The report says doctors at the department of respiratory medicine, Wythenshawe Hospital, Manchester and the department of respiratory medicine, Royal Preston Hospital, writing on the case said: “Following the procedure, the patient reported that he regularly played with and even swallowed pieces of Playmobil during his childhood. He recalled being given this Playmobil set for his seventh birthday and believes he aspirated the toy traffic cone soon after.”

The report says while it is a common occurrence for children to accidentally inhale small objects, “a case in which the onset of symptoms occurs so long after initial aspiration is unheard of”. The doctors said that to their knowledge, it was the first reported case of a tracheo-bronchial foreign body that was overlooked for 40 years.

“This may be because aspiration occurred at such a young age that the patient’s airway was able to remodel and adapt to the presence of this foreign body,” the report said. They added that during childhood, the object may have been absorbed into the lining of the lung, which developed around it.

The report says four months after the removal of the tiny traffic cone, the patient’s cough had nearly cleared and his other symptoms had markedly improved. The medics said: “On a positive note, his symptoms improved markedly and he finally found his long-lost Playmobil traffic cone in the very last place he would look.”

Abstract
Tracheobronchial foreign body (TFB) aspiration is a common occurrence in children compared with adults but the diagnosis is less likely to be delayed.1 This may be because of parental attention and because TFBs often obstruct proximal airways in children leading to more identifiable choking symptoms.1 However, smaller radiolucent foreign bodies may be overlooked in children due to misdiagnosis or as they are initially asymptomatic.2 Undiagnosed TFB can mimic a number of conditions in children including recurrent croup and asthma and cause others such as bronchiectasis and pneumonia.2 3 In adults, overlooked TFB aspiration can occasionally mimic a bronchogenic carcinoma.4–6 Long-standing cases of TFB aspiration for more than 20 years have rarely been reported4 7–9 but in only one of these did TFB aspiration occur in childhood.8 We report the unique case of an endobronchial Playmobil traffic cone that went undetected for 40 years and presented as a suspected bronchogenic carcinoma. To our knowledge this is the first reported case of a TFB that was overlooked for 40 years.

Sep 16th, 2020
More than one quarter of 120,000 Australian asthma patients have been prescribed potentially dangerous...