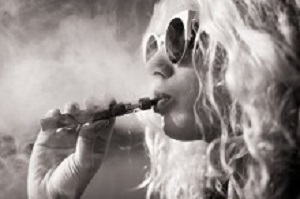 A vibrant industry has sprung up around electronic cigarettes – devices that use a metal coil to heat a flavoured liquid to create a vapour, which is inhaled (“vaped”) as if it were cigarette smoke – because they look cool, they are cool, and they offer a safe, pleasant alternative to smoking, writes Ivo Venter, who  is a columnist and the author of Extreme Environment, in the Daily Maverick. The liquid is generally based on a mixture of vegetable glycerine and food-grade propylene glycol, with flavourants and, optionally, some nicotine added.

Vegter writes: “Thousands of variants are available, to satisfy every requirement, from simple, no-fuss starter kits for beginners, to elaborate rigs for experienced vapers who like to customise their devices or even make their own. The same is true for liquids.This industry, of course, competes with the tobacco industry, which provides one major motive to campaign against e-cigarettes. In the face of declining tobacco sales, tobacco companies cannot afford competitors. That means they want e-cigarettes to face the same tax burden as tobacco products, even though they contain no tobacco at all. (The term e-cigarette, at first designed to appeal to the primary target market, smokers, turned out to be a public relations mistake, since legislators now wrongly associate vaping with smoking.)

“Inasmuch as e-cigarettes are commonly used to quit smoking, vaping also competes with the pharmacy and pharmaceutical industries, which have their own products that are supposed to help people stop smoking. They too, want regulation to level the playing field, and secure the monopoly on distributing e-cigarettes and liquids.

“Lobbying by these two powerful groups has led governments worldwide to consider regulating e-cigarettes either as tobacco products, so they can be taxed like tobacco, or as medical devices, so only pharmacies can sell them, often on a doctor’s prescription.

This is a major reason why e-cigarette manufacturers do not advertise their devices as smoking cessation aids. They do not want to be regulated like medicine, because that would destroy the market. Conversely, however, they also don’t want to be regulated like tobacco, because they are not tobacco products, and slapping massive taxes on e-cigarettes and liquids would also destroy the market.

“The South African government is, somewhat contradictorily, considering both. Despite being considered safe or low-risk, especially when divorced from burning tobacco, nicotine has been classified as a schedule 2 or 3 drug in South Africa, depending on the concentration. It remains unclear to what extent that applies to sellers of vaping liquid containing nicotine, or whether it applies at all to sellers of the devices themselves and the very many nicotine-free liquids on the market. 2

“On the other hand, the government wants to treat e-cigarettes just like tobacco products. In fact, health minister Aaron Motsoaledi wants an outright ban on vaping, falsely conflating it with smoking tobacco, and equally falsely attributing its rise to tobacco companies. He has never assessed, or addressed, the relative harm of vaping versus smoking, the potential for vaping to provide a far safer alternative to smoking, or even a means to help people to quit smoking.”

Vegter writes: “Opponents of e-cigarettes argue that they normalise smoking because vaping is considered to be cool, that they are a gateway to smoking for non-smokers, particularly among teens and young adults, that they aren’t useful as smoking cessation aids and that they pose long-term health risks.

“Only one of those statements is partly true. Vaping is not entirely risk-free. In 2016, the UK’s Royal College of Physicians issued a 200-page report on tobacco harm reduction, which found that e-cigarettes are not a gateway to smoking, they do not result in normalisation of smoking, they are useful for quitting smoking, and that their long-term harm is probably less than 5% compared to tobacco products.

“Purely anecdotally, I have tried and failed to quit smoking with gum, patches and medication. I successfully quit smoking twice by switching to vaping. In both cases, I used the vape for only about three months before I didn’t need it any more. Going from smoking to vaping was hard, but quitting the nicotine was easy. While vaping, I felt considerably better than while smoking. The reason I started again had nothing to do with vaping, and occurred 18 months after I quit vaping the first time. Testimonials are not scientific evidence, of course, but I wholeheartedly endorse vaping as an alternative to smoking, and as a means to quit altogether, if you so desire.

“I should note that when I chewed nicotine gum, my flavour options were ‘original’ and ‘mint’. Both tasted awful. I hated that gum. Its ability to motivate me to quit was less than zero.

“That’s what happens when you let the pharmaceutical industry design products. They have no reason to satisfy consumer needs, because the consumer has nowhere else to go. That’s why medicines don’t come in a range of appetising flavours.”

Vegter says: “With vaping, competition is rife, and the range of flavours is broad: any fruit you care to name, assorted candy flavours, mints and menthols, a variety of tobacco flavours (although I cannot recommend them), and coffees, vanillas and caramels (my favourite). You can tune every aspect of your vaping experience to your personal taste, and exploring your options is an exciting journey in itself.

“The notion that vaping eliminates 95% of potential harm, compared to smoking, does not mean that there is no risk, or no harm. It should therefore not be surprising that some studies do find some harm associated with vaping. On the other hand, there’s little glory in a study that finds nothing, so researchers are extra motivated to find sensational negative effects. The media certainly is motivated to hype up scare stories, so this plays right into their hands, too.

“The latest such study, for example, is about toxic chemicals such as arsenic and lead in e-cigarette vapour. Terrifying, that is. Great for headlines.

“I would have loved to take a closer look at the study, but I cannot find anything online other than the press release. Even that raises red flags, however. One of the researchers, Ana Maria Rule, has referred to e-cigarettes as ‘cig-a-likes’ in a previously published study. This exposes clear a priori bias on her part.

“The sample size was only 56. The researchers said their results varied widely, which should suggest caution in interpreting the results, and their findings were based on only ‘some’ of the results, which suggests cherry-picking.

“Amazingly, it seems vaping devices magically create lead from some other elements. Heating coils are typically made from metals such as stainless steel, nickel, and titanium, or alloys such as Kanthal, comprised of iron, chromium and aluminium. The researchers found levels of lead in the vapour that were up to 25 times higher than in the original liquid, which means that the coil somehow must have added the lead. This is impossible, of course, without either a nuclear reaction or alchemical magic. They expressed surprise, but left it at that.

“For logical thinkers, however, such a result suggests reductio ad absurdum: disproving a hypothesis by showing it leads to an impossible conclusion. Lead cannot magically appear from nowhere. If you found lead in your vapour, perhaps you need to fix your measuring equipment.

“The study did not deign to compare the exposure levels to metals as a result of vaping with those one might expect from tobacco use. This would seem pretty important when you’re funded by organisations that oppose tobacco use. If you get exposed to heavy metals and toxins, but at only a small fraction of the exposure you’d get from cigarettes, I know which one I would choose.

“The study also did not evaluate actual health effects, relying merely on the shock value of the words ‘lead’ and ‘arsenic’ to achieve its impact. In summary, it was a weak study, with a small sample size, which led to some impossible conclusions, and offered nothing by way of actual health risk information.

“By all means, do try to quantify the health risks of vaping. We surely would want to know the risks we take, even if they are small. But if you don’t count over-confident and exaggerated conclusions from isolated and inadequate studies, not a great deal of risk has actually been found. Do like the Royal College of Physicians, and put the risks in perspective. If the risk is non-negligible, at least point out that it is only a tiny fraction of the risk of smoking tobacco.

“That alone makes vaping a wonderful alternative to smoking, if you’re really interested in your own health or promoting public health. It reduces harm by 95% or more. It also helps people quit smoking, and appears to perform better than over-the-counter therapies. (That study used 5,863 participants, instead of 56.)

“Yes, there is a lot of research still to be done. Many claims, both for and against vaping, are not yet supported by sufficient scientific evidence. Many studies need confirmation or rejection by more and larger studies. Addiction and long-term harm evaluation are complex subjects.

“It is even hard to predict future behaviour from past behaviour. For example, studies finding significant incidence of smoking in parallel with vaping might find very different results after an information campaign that says smoking fewer cigarettes hardly decreases your risk at all, while vaping without smoking decreases it by 95%.

“If we start by banning vaping, or taxing it like tobacco, or making it unattractive by restricting its availability to prescription-only, we’ll choke a nascent industry to death, never knowing how successful it might have been at reducing harm from smoking.

“At the moment, people want to use e-cigarettes. Vaping is stylish, hi-tech and cool. People love the choice they have in designs, colours, and flavours. It is far more pleasant than smoking, and far less offensive to others. Those are tremendous advantages in terms of public health. How many smokers do you know who want to wear nicotine patches, or want to chew nicotine gum, or want to be on an anti-depressant that aids with smoking cessation?

“It’s easy for non-smokers to be judgemental, but it is not helpful. A holier-than-thou, autocratic minister with no sympathy for smokers will not be heard by the very same smokers whose behaviour he hopes to influence. And when it is clear that he cares nothing about harm reduction, but merely wants to dictate lifestyle choices, he’ll get no co-operation from the people he is trying to convince.

“Instead of blowing weak negatives studies out of proportion, and ignoring the fact that there are just as many positive studies on vaping, we – up to and including doctors and the minister – should at least keep an open mind on vaping. It has the potential to be a powerful tool in the effort to convince people to quit smoking. I understand the need for caveats and caution, but if I were in charge of public health, I’d be promoting the hell out of vaping.”