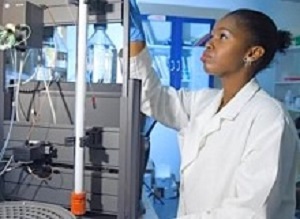 A Wits University lecturer in the department of haematology and molecular medicine has been named as one of the 100 Most Influential Young People in South Africa for 2018.

The ranking of young professionals is organised by Avance Media, a PR and rating agency, in partnership with 1000 African Voices and VIPI State (Avenva).

Thulile Khanyile, who is part of the HIV Pathogenesis Research Unit, was placed in 39th position for co-founding an NGO, Nka’Thuto Edu Propeller, with Thandeka Mhlanga, a physics lecturer at the Academy of Sound Engineering. The NGO aims to “develop teenagers with the mindset of problem-solving for economic development”, Khanyile said. “We carry this out by workshopping the learners on research methodology skills,” Khanyile added.

Khanyile said she was surprised to have made the list. “As I saw the other people on the list, I was even more surprised that I had made it. I think what makes this list different to others is that the public votes for you, and knowing that really humbled me.” The list includes athlete Wayde van Niekerk and musician Cassper Nyovest.

Nelia Manamela, one of Khanyile’s MSc students, said she had made her realise that “passion for science, hard work, being outspoken and establishing networks are very important in building a successful career”. She also said she had seen the impact Khanyile’s NGO had in previously disadvantaged areas.

“She is an amazing lecturer and mentor… always goes the extra mile to ensure her students not only excel academically, but also aspire to be more than just students – world influencers, inventors and innovators just like her,” said Manamela.

Khanyile said her highlight as a black woman in the science field was holding an academic position at Wits.

She said the bigger goal for Nka’Thuto was for it to become a platform that enables youth from all around Africa to develop business ideas and commercialises them to develop healthy African economies.

Avance Media MD Prince Akpah said the latest list featured a record 50 men and women who had made remarkable contributions in their respective fields. He said that their contributions had an extended impact on other young people in South Africa, Africa and beyond.