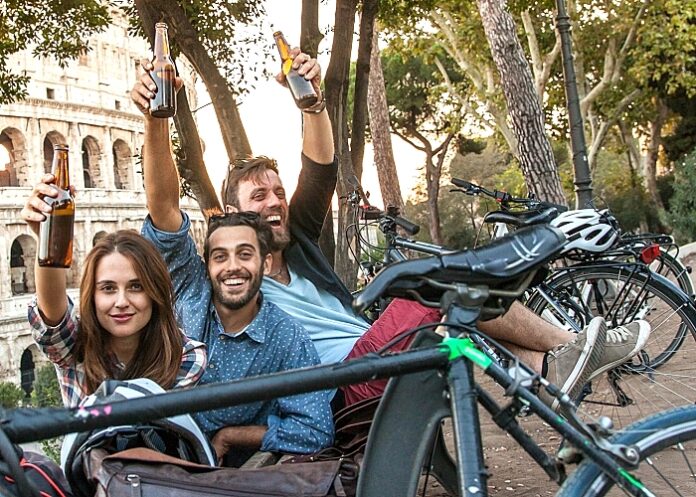 An international study has found a robust link between higher cardio fitness and higher alcohol consumption among general populations, writes Matthew Kadey in Bicycling magazine. He investigated why athletes tend to drink more alcohol than their peers.

More often than not, after emerging from the woods into the parking lot of your local mountain bike trail system, you can count on being greeted by a group of fellow riders with their hatches down and beers in hand.

Cyclocross race drinking is certainly well promoted. Plus, in the Tour de France’s early days, it wasn’t unusual for riders to spike their bidons with a shot of brandy. And, there are even bikepacking routes where craft breweries are heralded as much as the hero dirt.

This is all to say that while alcohol isn’t the best hydration strategy, it’s certainly woven into the fabric of cycling culture, according to the Bicycling story published on 27 October 2021.

And as it turns out, the connection between fitness and happy hour might be a lot stronger than you think. Regular exercisers drink more, a study published in August found, and it’s not just college-aged athletes who are saying cheers more often.

For grouping people into alcohol consumption patterns, those sipping three or fewer drinks per week in the 18 to 64 age category were considered for this study as being light drinkers; up to seven weekly drinks for those assigned female at birth and 14 for those assigned male at birth was moderate; and drinking above these numbers placed participants in the heavy group, according to Bicycling.

The study’s findings? There was a robust link between higher cardio fitness and higher alcohol consumption among the general population. This was determined based on cardiorespiratory fitness metrics, such as VO2 max determined with a treadmill test to exhaustion and self-reported exercise habits.

It’s worth noting that, based on a questionnaire to suss out possible alcoholism, 13% of the study participants met the threshold for alcohol dependence.

Keep in mind, continues Matthew Kadey in Bicycling, this study is only able to demonstrate a correlation and does not prove causation, so we can’t say for certain that being more active causes someone to drink more. It also relied on self-reported alcohol intake, which can introduce errors in the data collected, since people typically don’t report what they drink (or eat, in other studies) with 100% accuracy.

And, by studying only healthy participants, we don’t know if less ‘fit’ people who are working out more to try and get in better shape are also more likely to consume additional alcohol. There can also be some disagreements about what should be classified as a light, moderate or heavy drinker.

You might think that the link between physical fitness and alcohol consumption is surprising, because, after all, don’t modern-day riding buffs tend to drink more kale smoothies and kombucha as part of an overall healthy lifestyle?

“While we didn’t explore underpinning mechanisms in this paper, the psychological literature has reported there is a ‘licensing effect’, where meeting one’s goals – eg running 10 kilometres – gives a ‘license’ to indulge in a ‘vice’ behaviour – eg drinking,” Dr Kerem Shuval, lead author of the study and member of the Cooper Institute tells Bicycling.

This is the same rationale as eating a greasy pizza after a hard-charging ride. The act of working up a sweat subconsciously gives you the green light to indulge.

Also at play here could be personality traits. “Exercise training may reinforce the same sensation-seeking behaviour that leads people to drink,” says Dr J Leigh Leasure, director of the Brain Health & Plasticity Lab at the University of Texas at Austin.

Her research has linked both exercise and drinking behaviour to higher levels of sensation-seeking, which is a trait that floods the brain with dopamine.

“To extend the good feelings from an exercise-induced dopamine increase, people might drink alcohol after their workout,” she says. “Also, both activities are often done socially, and social interactions can also be rewarding, so there is the potential to combine three feel-good activities by working out and drinking with friends.”

Link to the full article in Bicycling below.

Fit and Tipsy? The interrelationship between cardiorespiratory fitness and alcohol consumption and dependence

Author affiliations: In the United States: The Cooper Institute in Dallas, Texas; Virginia Commonwealth University in Richmond; and True Health Initiative in Tulsa. Elsewhere: University of Haifa in Israel; and University of Groningen in the Netherlands.

Published in Medicine & Science in Sports & Exercise on 24 August 2021.

To examine whether higher levels of cardiorespiratory fitness are related to increased alcohol consumption and dependence among a large sample of adults attending a preventive medicine clinic.

A cross-sectional study of 38,653 apparently healthy patients who visited the Cooper Clinic (Dallas, TX) for preventive medical exams (1988-2019) and enrolled in the Cooper Center Longitudinal Study. The primary independent variable was cardiorespiratory fitness, based on a maximal treadmill test, and the dependent variables were alcohol consumption and dependence (self-reported).

Similarly, moderate and high fit men had 1.42 (95%CI 1.30-1.55) and 1.63 (95%CI 1.49-1.80) times greater odds of moderate-to-heavy alcohol consumption, respectively, in comparison to the low fitness group. In addition, among men who were heavy drinkers (but not women), higher fitness levels were related to lower rates of suggested alcohol dependence.

Specifically, these men had 45.7%, 41.7%, and 34.9% proportions of clinically relevant alcohol problems across low, moderate, and high fitness categories (adjusted p for trend <0.001).

See also from the MedicalBrief archive

A toast to moderate alcohol use – Danish and US studies