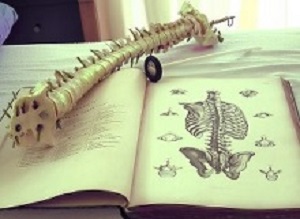 High velocity neck manipulation has been shown to result in stress on the eye and lead to spotty vision. The risk is rare, but one that Dr Yannis Paulus, a retina specialist at University of Michigan Kellogg Eye Centre, reports on.

The energetic thrusts and rotations sometimes performed in high-velocity neck manipulation have been linked to damage to the blood vessels in the retina. Resulting abnormal bleeding inside the eye may also cause vision loss.

This was the case for a 59-year-old woman who experienced a "tadpole" shaped spot in her vision while driving home from a chiropractor visit – with her sight worsening the next day. She had just received cervical spine manipulation using the high-velocity technique to help with her headaches.

The woman's vision returned to normal in about two weeks without treatment.

She was referred to Kellogg Eye Centre by her optometrist who co-authored the case report.

Because the cells of the retina are so sensitive, even small injuries to the blood vessels can translate to vision problems.

That's why Paulus encourages patients to report their alternative medicine pursuits – and for physicians to actively listen and inform them of possible related side effects.

Cardiovascular experts have been outspoken about health risks of chiropractic treatment. High-velocity neck manipulation has been associated with a certain type of stroke, or vertebral artery dissection, which led the American Heart Association to issue a warning statement in 2014.

The short, rapid movements of neck manipulation may cause a small tear in the artery walls in the neck. The artery wall injury can result in a stroke if a blood clot forms at the site and later breaks free to block a blood vessel in the brain.

Eye problems can follow, including double vision or central retinal artery occlusion, a blockage of the artery carrying oxygen to the nerve cells in the retina at the back of the eye.

But the case at Kellogg suggests a new complication: direct damage to structures in the eye due to the force of neck adjustments. It's the first case report of chiropractic care leading to multiple pre-retinal haemorrhages, authors say.

No specific treatment is needed for PVD. Most patients no longer notice flashes in their vision after three months and "floaters" tend to improve, according to the American Society of Retina Specialists.

Complications from PVD are rare but can be serious and in some cases require urgent treatment such as laser treatment to seal the retinal tear or surgery for a retinal detachment.

Paxlovid as a treatment for long COVID