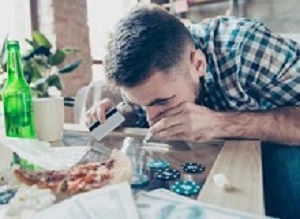 A radical gene therapy for drug addiction has been shown to dampen down cravings for cocaine and protect against overdoses of the substance that would normally be lethal, writes Ian Sample for The Guardian. The therapy uses implants of stem cells which have been genetically engineered to release a powerful enzyme that removes the class A drug from the bloodstream.

Tests in the lab showed that mice fitted with the implants lost their appetite for cocaine and survived massive overdoses of the drug that killed 100% of untreated animals.

The work has raised hopes for a long term treatment for addiction that works by clearing drugs from the body as soon as they are injected, inhaled or ingested. The therapy would effectively make addicts immune to the substances.

Lead researcher Ming Xu, a professor of anaesthesia and critical care at the University of Chicago, said the approach was “highly efficient and specific for eliminating cocaine.”

“Compared to other gene therapies, our approach is minimally invasive, long term, low maintenance and affordable. It’s very promising,” he told the Guardian.

Scientists have known for decades that an enzyme found in blood plasma called butyrylcholinesterase, or BChE, destroys cocaine by breaking it down into harmless byproducts. But the enzyme is not particularly fast-acting and does not linger in the bloodstream long enough to help those addicted to the drug.

To create their new therapy, the Chicago researchers rewrote the DNA in mouse skin stem cells to make them churn out a modified form of BChE that is 4,400 times more potent than the natural enzyme. The scientists reasoned that clumps of these engineered cells, called organoids, could be implanted under the skin, where they would release the cocaine-busting enzyme into the blood.

Tests in mice suggest the concept might work. Writing in the journal Nature Biomedical Engineering on Monday, Xu and his colleagues describe how they implanted genetically engineered organoids under the skin of several mice. Blood tests showed that the animals had consistently high levels of BChE for at least 10 weeks. As a result, the mice sought cocaine less than untreated animals, and were able to withstand normally fatal overdoses of the drug, up to 160mg per kg of bodyweight, the equivalent of 12g in a 75kg person. Estimated lethal doses of cocaine vary wildly in humans, but can be as low as 0.05g when taken nasally.

Xu believes the experimental therapy has the potential to become the first intervention approved for the treatment of cocaine addiction. Lab studies suggest that similar implants for humans could release BChE for 20 to 30 years, he said, and so potentially protect addicts for decades. “We have not observed obvious side effects, but will study them carefully,” Xu said.

Deaths from cocaine in England and Wales rose for the sixth consecutive year in 2017 with 432 lives lost to the drug, according to a report from the Office of National Statistics. In July, the Metropolitan police commissioner, Cressida Dick, criticised middle class cocaine users for fuelling the domestic drug trade. According to the latest crime survey for England and Wales, cocaine was used by an estimated 875,000 people in 2017-18, the highest number in a decade.

Though more work is needed before the cocaine-blocking therapy can be trialled in humans, Xu believes the approach has the potential to make drug users immune to cocaine and protect them from fatal overdoses. The team is working on similar genetically-engineered cells to treat alcohol and nicotine addiction, and soon expect to start research on a therapy for opioid addiction, Xu said.

Genome-edited skin epidermal stem cells protect mice from cocaine-seeking behaviour and cocaine overdose
Cocaine addiction is associated with compulsive drug seeking, and exposure to the drug or to drug-associated cues leads to
relapse, even after long periods of abstention.
A variety of pharmacological targets and behavioural interventions have been
explored to counteract cocaine addiction, but to date no market-approved medications for treating cocaine addiction or relapse
exist, and effective interventions for acute emergencies resulting from cocaine overdose are lacking.
We recently demonstrated that skin epidermal stem cells can be readily edited using CRISPR (clustered regularly interspaced short palindromic repeats)
and then transplanted back into the donor mice.
Here, we show that the transplantation, into mice, of skin cells modified to
express an enhanced form of butyrylcholinesterase—an enzyme that hydrolyses cocaine—enables the long-term release of
the enzyme and efficiently protects the mice from cocaine-seeking behaviour and cocaine overdose. Cutaneous gene therapy
through skin transplants that elicit drug elimination may offer a therapeutic option to address drug abuse.
Authors
Yuanyuan Li, Qingyao Kong, Jiping Yue, Xuewen Gou, Ming Xu and Xiaoyang Wu
[link url="https://www.theguardian.com/science/2018/sep/17/cure-for-cocaine-addiction-in-reach-say-scientists"]Article on The Guardian site[/link]