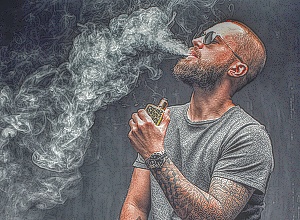 A study from King’s College London, published in the journal Addiction, highlights the “clear benefit” of using e-cigarettes daily in order to quit smoking. It also supports their effectiveness when compared to other methods of quitting, including nicotine replacement therapy or medication.

Although the number of people in England who smoke has continued to fall in recent years, tobacco smoking is still the leading preventable cause of premature death and disease – killing nearly 75,000 people in England in 2019.

While e-cigarettes have been around for more than a decade, evidence on their effectiveness for helping people to quit smoking is still limited, Kings College London reported on 10 March 2021.

Recent studies have produced inconsistent findings or failed to measure important factors such as frequency of use or the effect of different types of e-cigarette on attempts to quit.

“Our results show that when used daily, e-cigarettes help people to quit smoking, compared to no help at all,” said Dr Máirtín McDermott, Research Fellow at King’s College London’s National Addiction Centre and lead author of the study.

“These findings are in line with previous research, showing that e-cigarettes are a more effective aid for quitting than nicotine replacement therapy and prescribed medication.”

McDermott continued: “It’s important that we routinely measure how often people use e-cigarettes, as we’ve seen that more sporadic use at follow up – specifically of refillable types – was not associated with abstinence.”

In their Cancer Research UK-funded study, the researchers analysed data from an online survey of more than 1,155 people, which included smokers, ex-smokers who had quit within one year prior to completing the survey, and e-cigarette users.

Published in Addiction on 9 March, the study found that people who used a refillable e-cigarette daily to quit smoking were over five times more likely to achieve abstinence from tobacco smoking for one month, compared to those using no quitting aids at all.

Similarly, people who used a disposable or cartridge e-cigarette daily were three times more likely to quit for one month, compared to those using no help.

“Despite the World Health Organization’s (WHO’s) cautious stance on e-cigarettes, studies like ours show they are still one of the most effective quitting aids available,” said Dr Leonie Brose, Reader at King’s College London’s National Addiction Centre.

She added: “The WHO is especially concerned about refillable e-cigarettes, as these could allow the user to add harmful substances or higher levels of nicotine. However, we’ve shown that refillable types in particular are a very effective quitting aid when used daily, and this evidence should be factored into any future guidance around their use.”

Daily use of e-cigarettes was also more effective for quitting than other evidence-based methods of quitting – including nicotine replacement therapy, medication such as bupropion or varenicline, or any combination of these aids.

First published in the journal Addiction on 9 March 2021

Evidence on the effectiveness of electronic cigarettes (ECs) to facilitate abstinence from smoking is limited. The current study aimed to estimate the relative effectiveness of ECs and smoking cessation medication compared with using no help, accounting for frequency of use of ECs.

Four consecutive wave‐to‐wave transitions (waves 1‐2, 2‐3, 3‐4 or 4‐5) of a longitudinal online survey collected between 2012 and 2017 were analysed. Time between waves ranged between 12 and 17 months. Cigarette smokers at the baseline wave who attempted to quit smoking between waves were included.

Secondary Results were similar to the primary outcome; however, odds of abstinence were also increased by use of smoking cessation medication (OR=4.15 (1.79, 9.62), p=.001).

When used daily, electronic cigarettes appear to facilitate abstinence from smoking when compared with using no help.

[link url="https://onlinelibrary.wiley.com/doi/10.1111/add.15474"]Addiction journal article – The effectiveness of using e‐cigarettes for quitting smoking compared to other cessation methods among adults in the United Kingdom (Restricted access)[/link]