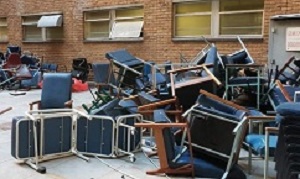 Western Cape Health, despite an acute and growing short of anaesthetists, has jeopardised the careers of three doctors with pristine academic and work records, because they “stole” two broken chairs to fix for the Tygerberg Hospital doctors' tea room, writes MedicalBrief. The sanctions, imposed by presiding officer Ms Shameem Modack-Robertson, have drawn condemnation and disbelief, and are being appealed at the Commission for Conciliation Mediation and Arbitration.

Two of the doctors, Dr Mathew de Swardt and Dr Kim Morgan, have approached the Commission for Conciliation Mediation and Arbitration (CCMA) after one was fired from Tygerberg Hospital and another given a written warning and suspended for a month, for “stealing” two broken chairs that they wanted to fix for the doctors' tea room. A third doctor, Dr Manie Domingo, had completed his specialisation when the sanction was handed down and already left the employment of Tygerberg Hospital. So, while he will not be sanctioned with the suspension, he does not escape the clear implications of a guilty finding.

According to Katharine Childs, who broke the story in a Times Select report, they had been upgrading the doctors’ tea room, out of their own pockets, and wanted to use the chairs there once they were fixed. Now, one is unable to finish his last two years of specialising, effectively ending his career.

In response to the disciplinary hearing outcome at Tygerberg Hospital, the South African Society of Anaesthesiologists (SASA) said it is concerned at the outcome of the disciplinary procedure in which one anaesthetist was dismissed and two others were given written warnings and sanctioned to periods of a month and a fortnight’s unpaid leave respectively.

The three were found guilty, by an internal hospital disciplinary process, of stealing two broken chairs that were allegedly condemned and actively being discarded. The chairs were returned when it became clear to the doctors that they had not followed prescribed administrative and security protocol.

“SASA does not and will never condone theft or look the other way,” Zimmelman says. “Adherence to procedures and protocols is vital in any organisation and at all levels in the hierarchy of any organisation, public and private. However, the punishment should fit the crime. This is a simple principle of administrative justice. In this instance, we do not believe the outcome was fair.

“The impact of the outcome is severe. One of the doctors will likely not be able to practice in the public sector again. Because of this, he will also not be able to complete his training period and will never, therefore, qualify as a specialist which is a further loss that does not help our human resource situation. The local hospital has suffered the loss of senior registrar anaesthetists that provide an essential specialised service. As a result, surgeries have been cancelled and emergency services have been compromised.

“Given the skills shortage that burdens the South African healthcare system, fairness must be applied rigorously to all disciplinary processes. The loss of three skilled anaesthetists, or any other worker in the healthcare sector who is treated this way, is a loss the sector can ill afford.”

SASA said that one of the doctors had completed his specialisation when the sanction was handed down and had already left the employment of Tygerberg Hospital. So, while he will not be required to take unpaid leave, he does not escape the clear implications of a guilty finding.

Michael Bagraim, who is acting on behalf of two the doctors and is also the Democratic Alliance's shadow minister for employment and labour, has slammed the "ludicrous and shameful" destruction of the good names of three "extremely highly qualified" and "desperately needed" public health service doctors.

Clearly the chairperson of the disciplinary enquiry was not a lateral thinker and merely added 2 and 2 together to get 20. The facts of the issue are simple and are as follows:

Mathew has been fixing the tea room over a long period of time and everyone was aware of it;
Mathew came across a whole bunch of broken chairs left out in the rain and the elements which were to be dumped;
Mathew went to the man handling the broken furniture and asked if he could have 2 of the chairs and get them fixed for the use in the tea room in the hospital;
Oral permission was granted to remove the 2 chairs, to have them fixed and to bring them back for use in the tea room;
Mathew went to get 2 colleagues to help move the two chairs and put them in a hatchback motor vehicle by going through security in broad daylight and knowing full well that the entire area is filmed;
Security at the door was engaged by Mathew and he told them he was taking the chairs and they said when he gets the paperwork he must bring it through to them;
Loading the chairs into the car was also under coverage of filming;
The chairs were taken back to his garage where he was about to commence working on them to fix them to make them usable. In the state they were in they were not usable;
He heard a few days later that there was some issue with regard to the chairs and he brought them back and placed them with the chairs that were to be dumped;
He went to go and speak to his direct line management, explained the story and they didn’t believe there was an issue;
All three doctors continued working for 6 months after the incident and in fact the entire medical staff knew about the incident whilst they continued working;
There was no issue about breach of trust even though the hospital management knew about what had transpired;
People came to testify at the hearing that they were fully aware of all the circumstances and at no stage was the taking of the chairs hidden from anyone and was done openly and honestly with the full intention of fixing the chairs and bringing them to the tea room;
The chairs have been written off and had no value but would have been enormously valuable for usage in the team room.

In essence to take three doctors and destroy their good names for an incident of this nature is ludicrous and shameful."

A petition is doing the rounds on social media, in support of the three.

Sep 15th, 2021
The SIU’s claim that Eastern Cape Health was guilty of maladministration in how it managed the litigation...
A Focus
September 15th, 2021