Be especially careful of Santa impersonators on toboggans 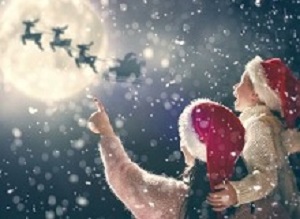 A data analysis of US Christmas season injuries found that 277 children were hurt during interactions with a Santa impersonator – for example, by falling off his lap or falling while running away in fear — with almost a quarter of a million injured in sled and toboggan accidents.

The study reveals the dangers of celebrating Christmas in the US, where thousands of people a year go to the emergency room with injuries from Christmas trees, electrical lights, sleds and Santa Claus impersonators. The study by researchers at the Australian Research Centre in Complementary and Integrative Medicine, faculty of health, University of Technology Sydney, the department of internal and integrative medicine, Kliniken Essen-Mitte and the faculty of medicine, University of Duisburg-Essen, Germany, is based on an analysis of hospital records for injuries connected to Christmas products and activities between 2007 and 2016. While the authors take a playful approach in writing about their work, their findings highlight serious safety hazards.

“While alerts in the entertainment sector are numerous (Clark Griswold illustrating risks such as burning down the Christmas tree, falling from the roof while installing Christmas lighting and being attacked by a squirrel hidden in the Christmas tree), serious health warnings are often ignored due to the preponderance of Christmas spirit,” the authors write.

An estimated 240,626 injuries were due to sleds and toboggans. Another major culprit: holiday decorations. Electrical decorations were behind an estimated 36,054 injuries while 80,208 were from other types of decorations, according to the study. Emergency room doctors and nurses treated an estimated 20,144 injuries associated with Christmas trees – 17,928 from artificial trees and 2,216 from real ones.

Researchers also found that 277 children were hurt during interactions with a Santa impersonator – for example, by falling off his lap or falling while running away in fear.

“Numerous cases of injuries were reported … involving children meeting Santa Claus in shopping malls,” the researchers write. “Previous studies have already questioned whether Santa Claus might be considered a public health pariah and negative role model due to the majority of photographic evidence showing him smoking, drinking and being overweight.”

Romy Lauche, a post-doctoral research fellow at the Australian Research Centre in Complementary and Integrative Medicine at the University of Technology Sydney, said that the most surprising finding was that almost everybody injured was white. A small fraction of injuries involved individuals who were black, Asian or indigenous. The research team did not look at injuries among Hispanics.

“We were really surprised to find such dramatic ethnic differences, and we feel that there is a public health issue that needs further research,” Lauche said. Lauche said she does not assume that the lower injury numbers among other racial groups – for example, black families – means they are less likely to use holiday decorations or suffer Christmas-related injuries. “So, what happens with the injured Black children, if they don’t show up in the ER? Does that have implications for their health and safety? This is just one potential issue,” she is quoted in the report as saying.

For the study, Lauche and her team examined data that had been collected through the National Electronic Injury Surveillance System (NEISS), a national sample of hospitals with around-the-clock emergency services. Each injury record includes detailed information, including the date of the incident, any consumer products involved, patient demographics, diagnoses and a narrative description of the incident. With that data, the researchers were able to generate estimates for injuries treated nationwide over the 10-year period.

Lauche said she believes this is the first published paper to analyse Christmas-related injuries. She and her colleagues had hoped it would appear in the British Medical Journal’s special Christmas issue, which features funny and obscure research findings. When the prestigious journal did not accept it, Lauche said they submitted the study to another journal without changing its “entertaining” tone.

Here are some other big takeaways: over the 10-year period, 2,839 injuries were connected to Christmas tree stands and supports while 10,492 were from chimneys. Christmas presents caused or contributed to another 2,305 injuries, although the authors did not explain which kinds of presents posed the greatest hazard; and injuries were most common in children, adults aged 30 to 60 years and adults aged 70 or older.

The authors suggest holiday cheer may be partly to blame for the injuries. “The exuberance those with high levels of Christmas spirit (and potentially high levels of ingested spirits) possess may lead them to become overconfident in their abilities to perform physical tasks, or practice potentially dangerous activities safely.

Overconfidence is a known risk factor for injuries in motor vehicle accidents and workplace accidents, and as such is likely to also be a factor in Christmas-related injuries.”