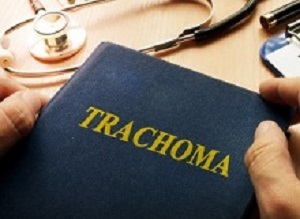 Continuous mass distribution of azithromycin in northern Ethiopia, where the childhood eye infection trachoma is a major cause of blindness, is effective in preventing recurrence of trachoma but does not eliminate the infection entirely, according to a study by Jeremy Keenan and colleagues from the University of California – San Francisco, and the Carter Centre in Addis Ababa and Georgia in the US.

Antibiotic prophylaxis has been used to limit mass outbreaks of bacterial infections, such as meningococcal meningitis and ocular chlamydia infection, known as trachoma, when vaccines or other prophylactic measures are not widely available.

In the current cluster-randomised study (TANA II), a subset of communities in northern Ethiopia that had participated in a 4-year long trachoma prevention trial (TANA I) of either annual or semi-annual azithromycin treatment, were newly assigned to receive either continued annual or semi-annual azithromycin treatment, or cessation of treatment. Participants were observed for another 3-5 years and assessed for ocular chlamydia prevalence compared to baseline within each intervention group.

Between November 2010 and May 2013, 48 communities, including 3,938 children aged 0-9 years at baseline, were included in the trial. In the communities assigned to continue azithromycin, mean antibiotic coverage was greater than 90%. In the discontinuation groups, the mean prevalence of infection increased from 8.3% (95% confidence interval 4.2% to 12.4%) at baseline to 14.7% (95% CI 8.7% to 20.8%, P=0.04) at 36 months. Ocular chlamydia prevalence in communities where mass azithromycin distribution was continued was 7.2% (95% CI 3.3 to 11.0%) at baseline and 6.6% (95% CI 1.1 to 12.0%, P=0.64) at 36 months, showing that despite a total of 7 years of mass azithromycin distribution, infection was not eliminated. Nonetheless, the 36-month prevalence of ocular chlamydia was significantly lower in communities continuing antibiotic treatment compared with those discontinuing treatment (P=0.03)

One limitation of the study is that the results may not apply to regions with lower prevalence of trachoma.

Jul 21st, 2021
HIV prevention products can and will be used consistently by adolescent girls and young women, according to...