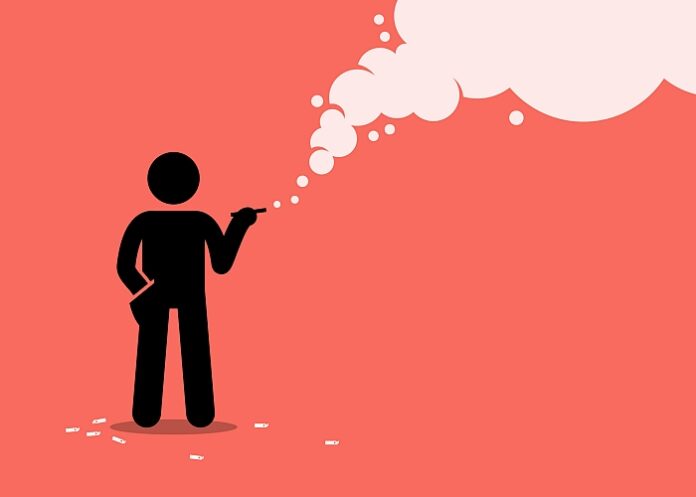 Death from a heart attack or stroke may be the first cardiovascular disease (CVD) event in some people who smoke cigarettes and CVD is the leading adverse health effect among smokers in the United States, according to research published in the Journal of the American Heart Association. Another AHA study finds that smoking quit ratios are lower among stroke survivors than cancer survivors.

Decades of research links cigarette smoking to premature death caused by cardiovascular disease and other diseases such as lung cancer, said the American Heart Association in a news release on 17 November 2021.

According to the American Heart Association’s Heart and Stroke Statistical Update 2021, more than 480,000 US adults die each year from cigarette smoking. Despite increasing awareness about the health benefits of quitting smoking, more than 34 million adults in the United States still smoke cigarettes.

“There is often more awareness and concern about cancer as a result of smoking than heart disease, so we wanted to better define the risks of smoking related to different types of cardiovascular disease and, most importantly, to cardiovascular death,” said lead study author Dr Sadiya S Kahn, an assistant professor of medicine in the division of cardiology at Northwestern University’s Feinberg School of Medicine in Chicago.

“In our analysis, even after adjusting for deaths not related to the heart, such as those due to lung cancer, we found that fatal or non-fatal events related to cardiovascular disease are more likely to occur among people who smoke.”

The researchers pooled data from nine long-term cohort studies in the US to evaluate multiple lifestyle factors as well as cardiovascular and other health outcomes.

Using the combined data, researchers estimated the number of years lived with and without cardiovascular disease according to smoking status and then examined the association between smoking and cardiovascular events after accounting for death from other diseases such as lung cancer.

Adjustments were made for age, race, body mass index (BMI), blood pressure and cholesterol levels. The follow-up time for study participants ranged from 10 to 25 years.

The biggest differences in risks and in deaths between the participants who smoked and those who didn’t smoke occurred during middle age.

“Our findings note that preventing a heart attack, stroke or heart failure is vital, yet preventing unexpected sudden death as the first manifestation of cardiovascular disease is clearly a priority. People who smoke may not realise the harm cigarettes are causing their body until it’s too late,” Khan said.

“Another notable finding among people who smoked was the early onset of CVD, and among those who developed CVD, how much younger they were. There’s not a lot of research on young adults who smoke, particularly among young men. Our study adds important perspective.”

Among young adults, 20 to 39 years of age, the analysis found:

Khan said these results emphasise the contribution of smoking to the earlier onset of CVD overall, and also affected excess CVD risk well into the eighth decade of life in both men and women, even after adjusting for the competing risk of non-CVD death.

Based on these results, the researchers suggest that all people who smoke should talk with their physicians or other health care professionals about taking steps toward quitting and improving their cardiovascular health.

“Smoking cessation is very challenging and reaching out to your doctor or other health care professionals for support and resources is important – the sooner the better,” Khan said. “This earlier onset of heart disease and stroke is very crucial to think about with aging and the already known complications of aging.”

There were a few limitations to the study. Smoking status was based on the participants’ report at the beginning of the study, so some could have stopped or started smoking during the follow-up, which would not have been included.

Khan also noted that they were not able to account for more specifics about the people who smoked, such as the number of years participants smoked, the number of cigarettes smoked per day or whether people who had previously smoked were included in the studies.

“Despite these limitations, the findings are quite significant,” Khan said.

“These results offer a very compelling message that people who smoke need to hear – smoking can kill you before you even know you have cardiovascular disease. It can, indeed, be a silent killer,” said Dr Esa M Davis, a member of the American Heart Association’s Council on Lifestyle and Cardiometabolic Health, associate professor of medicine and the clinical and translational science medical director of the tobacco treatment service of the University of PittsburghMedical Centre, who was not involved in the study.

“Heart attacks, strokes and other types of cardiovascular disease don’t always have early symptoms, so if you don’t know you have CVD, it can’t be treated. You can help prevent CVD by never smoking or stopping smoking as soon as possible.”

The American Heart Association supports ending the use of all combustible tobacco products while ensuring other tobacco products such as electronic cigarettes do not addict the next generation of youth and adolescents.

In 2019, the Association announced $20 million in research funding to drive scientific discovery that will help end teen tobacco use and nicotine addiction in the US.

Additionally, the Association’s Tobacco Centre of Regulatory Science is now in its second round of funding from the US Food and Drug Administration and the National Institutes of Health to study the cardiovascular effects of tobacco and nicotine products, including e-cigarettes and other non-traditional devices.

Basic and population research supported by the Centre will help develop further understanding relevant to the potential regulation of current, new and emerging tobacco and nicotine products.

The National Institutes of Health's National Heart, Lung and Blood Institute and National Centre for Advancing Translational Sciences, and the American Heart Association funded the study.

Stroke survivors were more likely to continue cigarette smoking than cancer survivors, raising the risk that they will have more health problems or die from a subsequent stroke or heart disease, according to research published in Stroke, a journal of the American Stroke Association, a division of the American Heart Association.

“The motivation for this study was the National Cancer Institute (NCI)’s Moonshot initiative that includes smoking cessation among people with cancer. We were curious to understand smoking among people with stroke and cardiovascular disease,” said Dr Neal Parikh, lead author of the study and a neurologist at New York-Presbyterian/Weill Cornell Medical Centre in New York City.

“In part to assess whether a similar program is necessary for stroke survivors, our team compared smoking cessation rates between stroke survivors and cancer survivors,” he said in the news released published on 17 November 2021.

The investigators analysed data collected between 2013 and 2019 from the Centers for Disease Control and Prevention (CDC) Behavioral Risk Factor Surveillance System, a national health survey that collects information regarding chronic health conditions and health-related behaviours annually.

After adjusting for demographic factors and the presence of smoking-related medical conditions, researchers found that:

“If you told a stroke neurologist that 40% of their patients don’t have their blood pressure controlled or weren’t taking their aspirin or their cholesterol-lowering medication, I think they would be very disappointed,” said Parikh, who is also an assistant professor of neurology in the Department of Neurology and of neuroscience in the Feil Family Brain and Mind Research Institute at Weill Cornell Medicine.

“These results indicate that we should be disappointed – more of our stroke patients need to quit smoking. We can and should be doing a lot better in helping patients with smoking cessation after stroke.”

The researchers also found that stroke survivors who live in the Stroke Belt – eight states in the southeastern United States with elevated stroke rates (North Carolina, South Carolina, Georgia, Tennessee, Alabama, Mississippi, Arkansas and Louisiana) – were around 6% less likely to have quit smoking than stroke survivors in other areas of the US.

Increasing smoking cessation is one factor than can be addressed to reduce the disproportionately high rates of strokes and stroke deaths in the Stroke Belt.

At NCI-designated sites, smoking cessation programmes often include a dedicated, intensive counseling program, a trained tobacco cessation specialist, and health care professionals with specific knowledge about the use of smoking cessation medications.

Hospital systems could also adjust care protocols so that every stroke patient receives a consultation with a tobacco cessation specialist and is enrolled in a smoking cessation program with the option to opt out, as opposed to having to seek out a programme.”

A limitation of the study is that the data in the survey was self-reported – it relied on individuals to indicate if they have ever smoked or are currently smoking. The study population is also limited because it included only people who live independently in the community, rather than those living in a nursing home or other living facility.

Published in the Journal of the American Heart Association on 17 November 2021.

We pooled and harmonised individual‐level data from nine population‐based cohorts in the United States. All participants were free of clinical CVD at baseline with available data on current smoking status, covariates, and CVD outcomes.

We examined the association between smoking status and total CVD and CVD subtypes, including fatal and nonfatal coronary heart disease, stroke, congestive heart failure, and other CVD deaths.

Current smoking was associated with a fatal event as the first manifestation of clinical CVD.

Smoking Cessation in Stroke Survivors in the United States: A Nationwide Analysis

Continued smoking after stroke is associated with a high risk of stroke recurrence and other cardiovascular disease. We sought to comprehensively understand the epidemiology of smoking cessation in stroke survivors in the United States.

We performed a cross-sectional analysis of data from the Centers for Disease Control and Prevention Behavioral Risk Factor Surveillance System, an annual, nationally representative health survey. Using pooled data from 2013 to 2019, we identified stroke and cancer survivors with a history of smoking.

We used survey procedures to estimate frequencies and summarize quit ratios with attention to demographic and geographic (state-wise and rural-urban) factors for stroke survivors. The quit ratio is conventionally defined as the proportion of ever smokers who have quit.

Then, we used multivariable logistic regression to compare quit ratios in stroke and cancer survivors while adjusting for demographics and smoking-related comorbidities.

There was marked geographic variation in quit ratios, ranging from 48.3% in Kentucky to 71.5% in California. Furthermore, compared with cancer survivors, stroke survivors were less likely to have quit smoking (odds ratio, 0.72 [95% CI, 0.67–0.79]) after accounting for differences in demographics and smoking-related comorbidities.

There were considerable demographic and geographic disparities in smoking quit ratios in stroke survivors, who were less likely to have quit smoking than cancer survivors. A targeted initiative is needed to improve smoking cessation for stroke survivors.