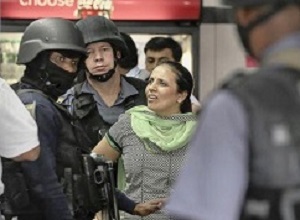 Durban. 120517. A Durban cuople were arrested by the Hawks regarding fraud at the University ok Kwazulu Natal. Picture Leon Lestrade

Three Durban restaurateurs arrested by the Hawks, accused of selling places to study at the University of KwaZulu Natal's medical school for up to half a million rand a spot, have been released on bail. The expanding investigation may encompass another SA medical school.

Varsha, 44, Hitesh Bhatt, 46, and co-accused Preshni Hiraman, 54, made a brief court appearance inPinetown Magistrate’s Court. after their arrests on Friday, reports The Mercury.

The trio face charges of corruption for allegedly selling spaces at the Nelson R Mandela School of Medicine and other health science places at the university for a fee of between R250 000 and R500 000.

The racket was exposed by the Sunday Tribune.

Provincial National Prosecuting Authority spokeswoman Natasha Kara said the magistrate had granted bail of R40 000 each on condition that they surrender their passports, that they do not go to UKZN or leave Durban without the consent of the investigating officer.

They were ordered not to interfere with the investigation.

According to the Sunday Tribune the trio ‘are accused of working as agents in cahoots with a syndicate at UKZN to fraudulently enrol students in the health science faculty and school of medicine’.

Evidence was seized in raids of their uMhlanga and La Lucia homes as well as at their restaurant. In February, The Mercury reported that UKZN vice-chancellor Dr Albert van Jaarsveld had called on the Hawks to investigate allegations of corruption at the medical school. This was in response to questions from the national higher education and training portfolio committee during the KZN leg of its probe into the state of universities.

The university confirmed in June last year that it was investigating a syndicate suspected of selling sought-after places at the medical school. It is believed that high-ranking academics and administration staff are involved.

Van Jaarsveld told the Sunday Tribune that he had handed information against the syndicate to the Hawks.

‘South Africa’s 26 public universities depend on their reputation for transparency, for fairness, for their role in nation-building and in building the economy.

‘How else can the knowledge that they produce and the students that they graduate be trusted?

‘They are funded through the public purse and through the fees paid by students. It is of vital importance that any attempt – both from within the institutions or without – to subvert the processes of selection and admission must be acted upon and eradicated,’ Bawa said.

The Sunday Tribune earlier reported that Varsha and Hiteshkumar Bhatt, and a former Chatsworth school teacher, Preshni Hiramun, are the "masterminds" who sold medicine and other health science places at the University of Kwazulu-natal for up to R500 000.

The trio was charged with fraud and contravention of the Prevention and Combating of Corrupt Activities Act. The three are accused of working as agents in cahoots with a syndicate at UKZN to fraudulently enrol students in the health science faculty and school of medicine. There is also evidence to suggest they have links to a syndicate at the Medical University of South Africa.

Friday’s raids were conducted at the couple’s upmarket homes in La Lucia and Umhlanga as well as their businesses.

Little Gujarat, in the Durban CBD, came to a standstill as customers watched as the police swooped, seizing assets belonging to the Bhatts, including two Mercedes-benz vehicles, laptops, hard-drives and flash drives.

At Hiramun’s home in Somerset Park, umhlanga, laptops were found hidden in a washing machine.
Evidence, such as documents pertaining to the syndicate, was also seized.

It is alleged the Bhatts and Hiramun acted as agents. They chatted to interested parents, negotiated bribes and liaised with university staff who helped get the parents’ children enrolled. This was done even though the students involved did not meet the minimum requirements for the courses.

The three suspects allegedly charged R250 000 for admission to the health sciences faculty. This included pharmacy, optometry and audiology. They charged R500 000 for a place in medicine.
It is further claimed the trio were involved in the sale of examination question and answer papers for an additional R30 000.

The arrests followed a sting operation by the Hawks during this year’s admission period from February to March, where students were admitted into the university for a bribe.

Van Jaarsveld welcomed the arrests. He said UKZN would not tolerate fraud within the institution and would apply appropriate prevention and detection controls.
“All fraud will be investigated and followed up by the application of all remedies available to the full extent of the law,” he said.

Police have now asked those who may be involved in the syndicate, including students fraudulently admitted, to come forward before they are caught. UKZN has set up a toll-free fraud hotline number, 0800 203 285.

Sep 15th, 2021
The SIU’s claim that Eastern Cape Health was guilty of maladministration in how it managed the litigation...
A Focus
September 15th, 2021