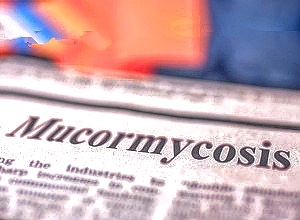 The “black fungus” killing hundreds across India may be related to the highly infectious Delta variant, rather than overuse of steroids, Indian specialists believe.

The Telegraph's Joe Wallen, who had exclusive access to 10 specialist hospitals across the western Indian state of Maharashtra, reports that the B.1.617 (Delta) strain is causing unprecedented damage to the pancreas of otherwise healthy people, triggering sudden onset diabetes and soaring blood glucose levels..

Mucormycosis is a fast-moving, aggressive infection that attacks a person’s sinuses, lungs and brain and is deadly if not treated.

Vikram Trivedi, 38-year-old lawyer, is one of those patients. A self-proclaimed fitness fanatic, his six-foot-six frame barely fits in his hospital bed. It has been five days since Trivedi had his left eyeball, maxillary sinus and the roof of his mouth urgently removed to save his life from the aggressive infection.

After recovering from the coronavirus, Trivedi’s blood glucose level rose to over 200mg/dL, a level suggesting full-blown diabetes – less than 140mg/dL is considered normal.

Prior to Covid-19, Seven Star Hospital would only see several mucormycosis cases in a year. But since mid-March, Dr Shailesh Kothalkar, the hospital’s leading ear, nose, and throat (ENT) surgeon, has treated over 280 patients and operated on 151 people, during gruelling 18 hour days at work.

The sudden explosion in cases during India’s brutal second wave was initially blamed on the overprescription of steroids during Covid-19 treatment – which can provide a cheap, effective treatment to combat severe cases, but also suppress the body’s immune system. However, Indian doctors are increasingly convinced that the epidemic has been triggered by the country’s new variant.

“This new variant is causing damage to the beta cells in the pancreas, which produce insulin and regulate blood glucose levels,” says Kothalkar. “We need more investigation into this but we are seeing this concerning new pandemic, around 40% more patients are developing diabetes after having Covid-19 during this second wave.”

Some studies, published in the British Medical Journal and Nature, suggest this trend may not be limited to Delta. There is increasing evidence that Covid-19 infection can be linked to the onset of diabetes, with between 5% and 14% of hospitalised patients developing the condition post-infection.

“There was also heavy use of steroids during India’s first Covid-19 wave, but we didn’t see this surge in mucormycosis cases,” explains Dr Shrinivas Chavan, the Head of the ENT Department at Mumbai’s government-run Grant Medical College and Sir JJ Hospital. “I had seen 45 patients in my entire career and now we have had 66 patients admitted in just one month. Over the last five days, we’ve barely slept, we’ve done 40 surgeries.”

Prior to March 1, there had been just 41 recorded cases of coronavirus induced mucormycosis worldwide. But, over the last week, there has been a spate of cases suddenly recorded in India's neighbours, including Nepal and Bangladesh, where Delta has become dominant.

Doctors say early detection, including regular blood glucose screening among recovered Covid-19 patients, is critical to stem the march of the fungus. But if it is allowed to progress for even several days, then the fatality rate can be as high as 50 per cent, even if treatment is then provided. Pre-pandemic, India reported a prevalence of 17 mucormycosis cases per million.

This baseline level was slightly higher than in western countries, with an estimated two to ten cases per million recorded in the UK and France. The higher case rate in India is linked to uncontrolled diabetes – the country has the highest caseload in the world, with 77 million known patients. But millions more Indians are undiagnosed due to sporadic surveillance for the disease in remote, rural areas.

Internationally, some are currently sceptical about whether the variant is to blame and say more research is needed. “I think it's possible that a different variant would produce more disruption of the lining of the nose or the lungs… and then that would allow fungus to get in more easily,” says David Denning, a professor of infectious diseases at the University of Manchester and chief executive of the Global Action Fund for Fungal Infections. “But it’s a bit tenuous.”

“The growing evidence suggesting that coronavirus might be triggering diabetes in some people is concerning, but there’s still a lot more to learn about whether coronavirus is directly causing new cases of diabetes,” adds Dr Faye Riley, senior research communications officer at Diabetes UK.

What can we learn from the tragedy of Archie Battersbee’s death?