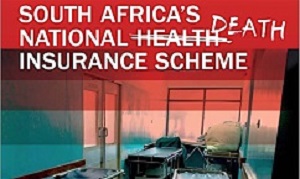 An Institute of Race Relations report says that the proposed National Health Insurance is a 'noble goal' but will destroy private healthcare and medical schemes, and cause an exodus of healthcare professionals. The Health Department said it was a 'waste of time' to respond to the Institute, which was 'anti-NHI and anti-poor'.

Exactly three months after Health Minister Aaron Motsoaledi released the National Health Insurance (NHI) Bill, the new report says deficiencies in the state sector will doom it to failure. The Times reports that the report, by the Institute of Race Relations, argues that while NHI is aimed at ensuring decent health care for all, it is unlikely to make this a reality. On its own, NHI will do little to overcome grave deficiencies in public health care.

Authors Marius Roodt and Mailies Fleming are quoted as saying that implementation of NHI was also likely to trigger an exodus of health professionals, which will increase the already heavy burden on those who remain in the country. “As the number of doctors falls and other standards drop, a decline in the quality of healthcare for all will be the inevitable result,” they said.

“Throwing more money at problems in the public healthcare system will not solve them. It is not a lack of resources that is causing these problems, but poor management and administration, corruption and cadre deployment.”

The Times says Popo Maja, spokesperson for the  Health Department, rubbished the report, saying the institute that produced it was “anti-NHI and anti-poor”. He added: “The Institute for Race Relations is known to be anti-NHI or anything that the government is doing. It’s actually a waste of time to even respond to them.”

In June, Motsoaledi released the NHI Bill for public comment, paving the way for the establishment of a fund that would pool funds to buy healthcare services. Once the Bill becomes law, South Africans will be required to pay into the fund before they pay for their medical aid premiums.

The universal healthcare insurance fund proposes free top-notch health services to every South African irrespective of their socioeconomic status. But, The Times says, in the IRR report – based on more than 100 media reports in the past year, mainly about negligence, corruption and mismanagement – Roodt and Fleming said such incidents proved health care was in crisis.

One of the incidents the report mentioned was that of a 13-year-old who lost both feet, his left hand and four fingers following complications after appendix surgery. He was not taken to a high-care ward after his operation, as the lift was not working. The amputations followed an infection that affected his circulation.

While the NHI White Paper estimated the cost of the scheme at R256bn, the IRR report said this amount was unconvincing and was likely to double. “As (Motsoaledi) says, its costs will depend on its design and could go as high as R1trn. The more it costs, moreover, the more taxes will have to be raised,” said Roodt and Fleming.

“The burden will lie particularly heavily on some 600,000 individual taxpayers, who currently pay more than 60% of all personal income tax collected. If a third of these taxpayers were to emigrate in the face of increased taxes and reduced health services, the impact on revenues – and hence on all government spending – would be severe.”

According to The Times, the report said there was no need to destroy the current health system, arguing universal health coverage was already available at public hospitals. “What must be done to ensure that the healthcare provided at these institutions is of a high standard is to ensure merit-based appointments, strict accountability for poor performance, and effective action against corruption and wasteful spending. Public-private partnerships would also help improve their operation,” they said.

South Africa also needed to be innovative in working to provide quality healthcare for all, Roodt and Fleming said. Greater access to private healthcare should go hand in hand with improving the public healthcare system through merit-based appointments, strict accountability for poor performance and effective action against corruption and wasteful spending.

“Poor households should be helped to join these schemes or buy these policies through tax-funded health vouchers. To help spread risks, medical scheme membership or health insurance cover should be mandatory for all employees, with premiums for lower-paid employees buttressed by employer contributions for which businesses would garner tax credits.”

The Times says the report also recommended increased public-private partnerships, regulations to allow the private sector to establish more day hospitals and the like, and suggested private universities and hospitals be permitted to train doctors, specialists and other health providers, as public training institutions could not meet the scale of need.