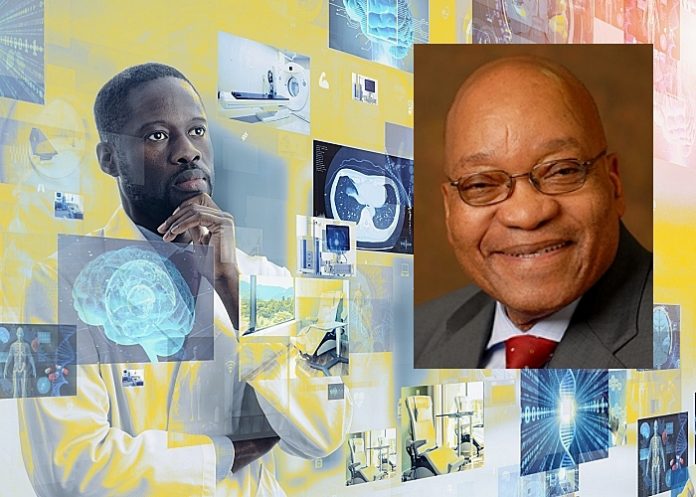 After being given access to Zuma’s medical records, the three state-appointed specialists — cardiologist Professor Andew Sarkin, assisted by the heads of gastric surgery and nephrology at Pretoria’s Steve Biko Academic Hospital and the University of Pretoria,  Professor Martin Brand and Dr Albert Muranda — deemed him fit to stand trial, according to an affidavit led by Advocate Billy Downer in the Pietermaritzburg High Court this week. Downer leads the prosecution team in the arms deal trial in which Zuma and French arms company Thales face numerous corruption and fraud charges.

Zuma was admitted to a private hospital the moment that he was admitted to Estcourt prison to serve a 15-month sentence imposed by the Constitutional Court, on the advice of his SA National Defence Force Military Health Service doctors. The sentence was for contempt of its ruling that he appear before the Zondo commission of inquiry into state capture.

On 5 September, Zuma was released on medical parole because of his apparently deteriorating medical condition by the National Commissioner of Correctional Services, Arthur Fraser, contrary to the recommendations of his own medical parole advisory board.

On 6 September, Zuma was admitted to a Pretoria hospital for “extensive medical evaluation and care” to do with his “medical condition”, which required an “extensive emergency procedure”. The procedure had allegedly been delayed for 18 months because of “compounding” legal matters and his incarceration.

In his affidavit, Downer says that Zuma’s doctors and the State-appointed team had what was described in the affidavit as a “collegial and open” and comprehensive discussion about Zuma’s state of health between the team nominated by the National Prosecuting Authority and the doctors who have been treating Zuma since the early days of his imprisonment for contempt.

The NPA’s experts were not allowed to examine Zuma, but were promised his medical records. The teams were attempting to reach some sort of consensus on his health.

Earlier, Zuma’s attorney Bethuel Thusini  accused Downer of leaking documents about the former president's health to a journalist and “unlawfully” sending Sarkin to examine Zuma, reports SowetanLIVE. While Thusini conceded that Judge Piet Koen had ordered that the state could appoint its own medical experts to examine him, this was on the basis that Zuma’s medical team would first provide a comprehensive medical report for the NPA to formulate an opinion.

In his affidavit, Downer denied all allegations, saying the State had not received the comprehensive medical report on time, and then Zuma’s doctors did not initially provide all of his medical records. Based on what they did get, Sarkin, Prof Martin Brand, a gastric surgeon, and Dr Albert Muranda, a nephrologist, concluded in a report dated 14 September that Zuma was medically to stand trial.

Regarding the leaking of “confidential information”, Downer says the initial medical report was “general”, and only referred to Zuma’s “condition” and that it would take six months for him to recover.

Downer denied sending Sarkin to the hospital “for the purpose of examining him”. “The State has not sought to enforce its rights to have him medically examined. Instead the State has focused on the meetings between the two medical teams and the provision by Zuma’s team of the records and information needed by the State-appointed doctors to prepare their medical report.”

Zuma's advocate Dali Mpofu accused the NPA of being "vultures", adding that they sought to conduct a physical examination on Zuma, even before his own doctors had submitted a medical report. Mpofu also accused the NPA of "harassment" for demanding to examine Zuma. "It was just undue harassment," he is quoted as saying in a News24 report.

"It was common cause on all sides (parties) that a medical report would be released by a treating doctor and, depending on its contents, then there may arise a right for a physical examination. We know that, before the report was received, the vultures of the NPA were hovering and seeking to conduct a physical examination of the first accused. For what?" Mpofu said.

“This issue is not just privacy, but it also has national security implications because we are talking about a former head of state here, so you can't have people… unknown people, wanting to go and examine the former head of state. We don't know who they are, we have asked for their CVs, we were not given their CVs.”

At the start of Tuesday's proceedings, with Zuma absent from court, Mpofu told Koen his client’s "precarious health" dictated he remain "close to his doctors in Gauteng".

There was animated wrangling between the state and the defence on medical records submitted with a view to obtaining parole, with Mpofu strenuously arguing against the risk of confidential documents "flying around", given the various legal challenges under way to the Correctional Services Commissioner Arthur Fraser’s decision to release Zuma.

Koen countered that there was no risk as he would keep the records under lock and key, and that moreover, the defence was advancing medical grounds for Zuma’s failure to appear at court.

Advocate Wim Trengove insisted that objections to the request for medical records were misplaced because Zuma’s health was again at issue, given his absence. And the defence’s objections once again rendered the court unable to reach a final conclusion on the matter, said the M&G report.

"What is wrong with him and why isn’t he here?" Trengove asked. But Mpofu argued that the matter of Zuma’s health was not of immediate concern to the court and, therefore, further medical records need not be submitted to Koen, because he was not arguing for a postponement.

Daily Maverick notes that Zuma’s legal team has consistently called out the State for wanting to re-examine Zuma, saying that by doing so it is undermining the trust and authority of his military medical team, who have been treating Zuma, while Sarkin has never done so.

But Downer says in his affidavit: “I respectfully submit the NPA is within its right to be separately advised by, and if necessary to adduce the evidence of, medical experts who are not part of the team treating [Zuma], as to his fitness to attend court and stand trial.

His fitness to stand trial would come into play only should the Downer application fail, wrote Downer.

Outrage over medical parole for Zuma by outgoing Commissioner