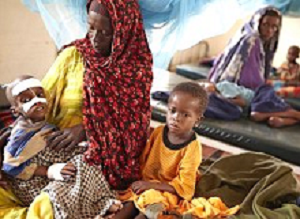 Treating hospitalised, severely malnourished children with a lactose-free, reduced-carbohydrate milk formula does not improve clinical outcomes, according to a multi-centre, double-blind trial in Kenya and Malawi.

The study by Robert Bandsma of the Hospital for Sick Children in Toronto, Canada, James Berkley of the KEMRI/Wellcome Trust Research Programme in Kilifi, Kenya, and colleagues.

Children who are sick and have severe acute malnutrition have a high risk of death during their stay in hospital. Diarrhoea from malabsorption of sugars, and refeeding syndrome – a metabolic disturbance that occurs as a result of rapid reinstitution of nutrition – may both contribute to delayed recovery and early mortality.

Doctors and nutritionists have wondered if giving alternative types of formula, such as lactose-free feeds (lactose is one of the sugars that may not be absorbed and can cause diarrhoea) may be beneficial; these feeds are intermittently used and are expensive in resource-poor settings.

The study team re-designed the initial formula given to sick, severely malnourished children by eliminating lactose and reducing other sugars (carbohydrates) by about 30%, in order to reduce these risks whilst still providing sufficient vital energy and nutrients to children.

In a multi-centre, double-blind trial in Kenya and Malawi, hospitalised, sick severely malnourished children with a median age of 16 months were randomized to receive the existing standard formula (418 participants) or the modified formula (425 participants).

The two groups did not differ significantly in terms of how long it took to stabilize their condition, as judged by recovery from their acute illness as well as metabolic stabilization evidenced by recovery of appetite. There were no differences in the numbers who died or suffered diarrhoea between the two groups.

Importantly, biochemical analysis amongst the children in the study who had diarrhoea suggested that, despite removing lactose and reducing the other carbohydrates, the lactose-free formula still presented a load of carbohydrates above that which could be absorbed by the intestines.

According to the authors, the results support the ongoing use of the current milk formulation rather than using a lactose-free formula for children who are admitted to hospital sick and severely malnourished, including those with diarrhoea. Further research is needed to investigate whether a more radical reformulation of these feeds could be made whilst still providing the energy and nutrients needed by sick and severely malnourished children.

Abstract
Background: Children with medically complicated severe acute malnutrition (SAM) have high risk of inpatient mortality. Diarrhea, carbohydrate malabsorption, and refeeding syndrome may contribute to early mortality and delayed recovery. We tested the hypothesis that a lactose-free, low-carbohydrate F75 milk would serve to limit these risks, thereby reducing the number of days in the stabilization phase.
Methods and findings: In a multicenter double-blind trial, hospitalized severely malnourished children were randomized to receive standard formula (F75) or isocaloric modified F75 (mF75) without lactose and with reduced carbohydrate. The primary endpoint was time to stabilization, as defined by the World Health Organization (WHO), with intention-to-treat analysis. Secondary outcomes included in-hospital mortality, diarrhea, and biochemical features of malabsorption and refeeding syndrome. The trial was registered at clinicaltrials.gov (NCT02246296). Four hundred eighteen and 425 severely malnourished children were randomized to F75 and mF75, respectively, with 516 (61%) enrolled in Kenya and 327 (39%) in Malawi. Children with a median age of 16 months were enrolled between 4 December 2014 and 24 December 2015. One hundred ninety-four (46%) children assigned to F75 and 188 (44%) to mF75 had diarrhea at admission. Median time to stabilization was 3 days (IQR 2–5 days), which was similar between randomized groups (0.23 [95% CI −0.13 to 0.60], P = 0.59). There was no evidence of effect modification by diarrhea at admission, age, edema, or HIV status. Thirty-six and 39 children died before stabilization in the F75 and in mF75 arm, respectively (P = 0.84). Cumulative days with diarrhea (P = 0.27), enteral (P = 0.42) or intravenous fluids (P = 0.19), other serious adverse events before stabilization, and serum and stool biochemistry at day 3 did not differ between groups. The main limitation was that the primary outcome of clinical stabilization was based on WHO guidelines, comprising clinical evidence of recovery from acute illness as well as metabolic stabilization evidenced by recovery of appetite.
Conclusions: Empirically treating hospitalized severely malnourished children during the stabilization phase with lactose-free, reduced-carbohydrate milk formula did not improve clinical outcomes. The biochemical analyses suggest that the lactose-free formulae may still exceed a carbohydrate load threshold for intestinal absorption, which may limit their usefulness in the context of complicated SAM.