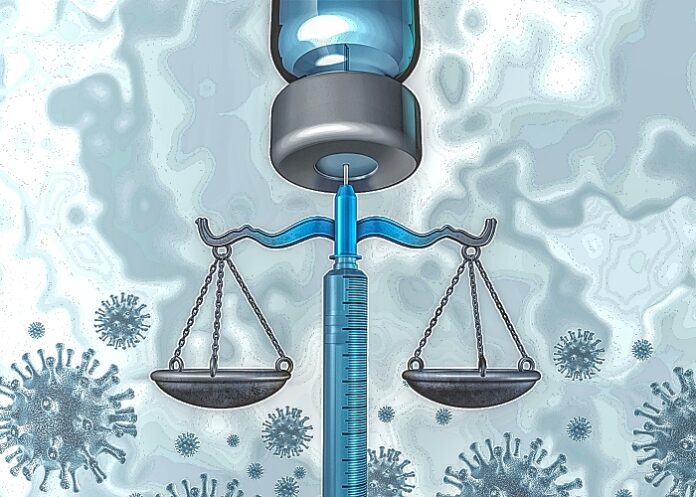 There is a strong ethical case to be made for mandatory vaccinations in South Africa, writes writes Stellenbosch University’s Professor Keymanthri Moodley. This is what they should look like.

Moodley, Distinguished Professor in the Department of Medicine and Director of the Centre for Medical Ethics & Law, writes in in The Conversation:

Compelling scientific, ethical and legal arguments have been advanced around whether or not people should be forced to be vaccinated. Some countries have already introduced mandates which require people to produce proof of vaccination to access certain public places.

The debates are based on a realistic fear about the continuing emergence of new variants against the backdrop of large numbers of unvaccinated people – in high-income countries as well as in low-and-middle-income countries.

That fear was realised on 25 November 2021 when South African scientists announced the new variant, to which the World Health Organisation assigned the name Omicron. This “variant of concern” threw the world into chaos – global markets tumbled, travel restrictions were slapped on various southern African countries and health facilities were on high alert.

South Africa’s President Cyril Ramaphosa recently announced that the government had set up a task team to advise on vaccine mandates. In my view this late announcement, after three significant waves of infection over 18 months and after more than 250,000 deaths of South Africans, could be interpreted as a serious disregard for life, health, the healthcare system and the economy.

The delayed response raises several questions: how effective would a vaccination mandate be at this late stage? And what should one look like if and when it’s put in place?

Vaccine mandates that have been successfully implemented have shown a marked increase in the vaccine status of employees. The private health insurer Discovery Limited is a case in point. Since introducing a mandatory vaccine policy, vaccine uptake among employees increased from 22% in September 2021 to 94% in November 2021.

Several countries have introduced mandates. These include France, Austria, Greece, The Netherlands and the US. The mandates initially applied to healthcare workers who have an obligation to protect patients and colleagues from harm. Now, vaccine passes are also required to access museums, restaurants, bars, gyms, public transport and shopping malls.

In my view there is a strong ethical case to be made for a vaccine mandate. I agree with Jeffery Gerber and Paul Offit, paediatricians and epidemiologists who wrote in an editorial in Science: a choice not to get a vaccine is not a risk free choice; rather it’s a choice to take a different and more serious risk…

To date, only 36.8% of South Africa’s adult population has been fully vaccinated – with either a single dose of Johnson and Johnson or two doses of Pfizer. The aim was to cover 70% of the adult population by December 2021.

Clearly, the country has fallen far behind on this target.

The key requirement of any mandate should be that a vaccination certificate be produced for access to high-risk public spaces where harm to others could occur. These include:
• entry to all high-risk congregate environments. This would include gyms, restaurants, bars, nightclubs, indoor shopping areas, theatres, lecture halls, hospitals, clinics, conferences, trade shows.
• public and leisure transport – taxis, buses, trains, cruise ships and aeroplanes. Most international flights require both a vaccine certificate and a negative PCR test. Domestic flights ought to have similar requirements because the risk is similar, especially where inter-provincial travel can spread the virus from one hotspot province to another with low incidence. This risk is being shown by Omicron.

But mandatory vaccine policies must include exceptions such as someone having a severe allergic reaction to a first vaccine dose or having an allergy to a specific component of a vaccine.

The question of allowing religious objections is more difficult, however. Most major religions have not specifically outlawed COVID-19 vaccines. To the contrary, many religious authorities have strongly supported COVID-19 vaccinations. This is because religious teachings in general promote sacrifice of personal freedoms for others, and vaccination to protect others may be viewed as “an act of love”, a moral obligation and caring for fellow human beings.

But some arguments have been raised by religious groups about aborted foetal cells. These were used decades ago to create “immortal” cell lines for vaccine and other drug research as well as for many processed food additives. This was the case for research involving Tylenol, Aspirin, Brufen, Benadryl, Zoloft, Azithromycin among others. Current COVID-19 vaccines do not contain aborted foetal cells.

To consistently apply an argument about aborted foetal cells used in drug development would require proponents to refuse to take a wide range of over the counter and prescribed medication that they have already been using for decades. Consistency is an important principle in assessing how sincere religious objections are. The objection must also be based on disagreement with a central tenet of that religion.

Objections to mandates are presented using a human rights framework with some claiming individual freedoms. However, this approach is not relevant in the context of a pandemic where public interest overrides individual liberties.

South Africa is continuing to deal with the economic fallout from the pandemic, with fresh blows being felt to the tourism sector, in particular, as a result of a new wave in the wake of the Omicron variant announcement.This makes the issue of a vaccination mandate all the more urgent.

Clinical reports about Omicron suggest that people who are vaccinated are experiencing mild versions of the disease while hospitalisations are predominantly of people who haven’t been vaccinated.

A vaccine mandate will achieve a number of objectives. It will improve vaccine uptake. Second, it will protect health and health systems. Third, it will allow the economy to revive and stay open. Fourth, tourists will be more inclined to visit countries with vaccine mandates because the countries will be perceived as being safer. This too will result in economic growth. A win-win scenario for all.

The Conversation article – Vaccine mandates in South Africa: where are they most needed? (Creative Commons Licence)

UCT and Stellenbosch academics line up behind mandatory COVID-19 vaccines

The debate over a mandatory vaccine policy for South Africa

Theranos: A cautionary tale on how not to commercialise medical advances