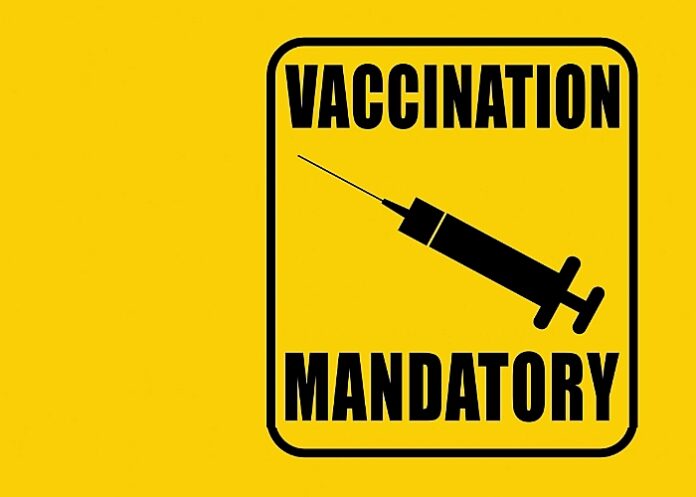 Following the emergence of the Omicron variant of the COVID-19 virus and the slower than anticipated South African take-up of vaccinations, there has been growing pressure on the government, especially from business and trade unions, to take the  contentious step of imposing mandatory vaccinations, writes MedicalBrief.

In his address to the nation on 28 November, President Cyril Ramaphosa stressed the importance of the country ramping up its vaccination rate. At present, just 24% of the population has been fully inoculated against COVID-19. He said a ministerial task team would be considering introducing mandatory COVID-19 vaccines for specific activities and locations and access restriction in an effort to reduce transmission and contain the newest variant.

Ramaphosa said engagements with all stakeholders were under way to consider making access to work, events and public transport vaccine mandatory. “We have therefore been undertaking engagements with social partners and other stakeholders on introducing measures that make vaccination a condition for access to workplaces, public events, public transport and public establishments.”

“Government has set up a task team that will undertake broad consultations on making vaccination mandatory for specific activities and locations. If we don't address this seriously and as a matter of urgency, we will continue to be vulnerable to new variants and will continue to suffer new waves of infection. A number of other countries, including some companies in our country, have made vaccination compulsory. I’d like consultation to be made because we need to be able to defend our people.”

After earlier resistance, most unions are softening their stance opposing mandatory vaccinations. SA Federation of Trade Unions spokesperson Trevor Shaku said the majority of the workers were in favour of making vaccines mandatory but there were also concerns. “The only concern that we have is that there are some employers who will be weaponising this, targeting workers to dismiss them without following due process,” Shaku said.

The country’s largest trade union federation Cosatu had initially said the current measures to curb the pandemic needed to be improved but that any further restrictions should be restricted to the unvaccinated. However, Cosatu has since changed its stance and now supports mandatory COVID-19 vaccination.

“Our position has evolved,” spokesperson Sizwe Pamla said. "Originally, our position was ‘let’s persuade the people to vaccinate’. But the reality is that 2022 will be the third year of living with this deadly pandemic. We do not want another lockdown, we would rather have people forced to vaccinate than have another lockdown. Vaccination is not the worst option right now as things stand – having people lose their right to earn a living is the worst option,” he said.

However, the National Council of Trade Unions (NACTU) president Pat Mphela said that NACTU remained wary of mandatory vaccinations. Andthe National Union of Mineworkers (NUM has vowed to “fight tooth and nail to protect its members from the repercussions of resisting the jab, should it become compulsory to inoculate”.

“Just as was done with TB and HIV, testing was voluntary and the process proved to be a success. When it comes to COVID-19, the same principle should apply,” said NUM deputy president Phillip Vilakazi.

He said the government’s approach should be persuasion, not threats. “Once you bring in threats, there is bound to be resistance and we are prepared to fight for our members’ rights,” he added.

Employer/labour forum Nedlac is due to hold emergency meetings this week to discuss how to increase workplace jabs and limit access for those people who choose not to toe the line.

Business Leadership SA chief executive Busi Mavuso this week said: “I support the introduction of vaccine mandates by employers, both to keep those who are vaccinated safe while at work, and to increase pressure on others to get vaccinated.” Black Business Chamber secretary-general Mntuwekhaya ‘Khaya’ Cishe said: “We are aware that the government has a responsibility to protect its citizens. However, they should ensure that they do not break the Constitution because that would set a very bad precedent.”

Business group B4SA said there was no other choice other than mandatory vaccinations. B4SA convener and chief executive of Business Unity SA, Cas Coovadia, said they realised there would be legal challenges to such a move, but B4SA would support litigation to obtain legal certainty.

Unvaccinated South Africans face the possibility of restrictions on being able to access public services and workplaces as soon as the beginning of 2022 after the discovery of the new variant, and  about mandatory vaccination. Talks between government, business and labour on the introduction of a form of COVID-19 vaccine passport system are at an advanced stage. A passport system would restrict access to certain events and would not involve people being forced to take jabs against their will.

Companies such as Discovery have pressed on with mandates for their employees, having sought legal advice that left them confident they would successfully repel challenges. This week, Old Mutual announced that is is implementing a mandatory vaccination policy for all its employees, at all its subsidiaries.

Employees have until 1 January 2022 to get at least one dose of the Covid-19 vaccine. They have to be fully vaccinated by March 2022. They must also declare and submit proof of their vaccination status via a CoronaFighter app declaration process within the deadline. Employees who don’t want to get the vaccine must apply for “vaccination exemption”, which will be considered for “specific medical, religious or constitutional grounds”.

If the employee’s exemption is granted, there are additional measures in place. This includes temporary or permanent alternative placement, weekly Covid-19 PCR testing, wearing additional personal protective equipment and an N95 mask. “If we can’t reasonably accommodate you, our HR process will begin, which could result in termination,” read the internal staff memo.

This week, the University of the Western Cape joined the majority of universities in adopting a mandatory vaccination policy for the 2022 academic year, after what iit described as “a lengthy consultative process and robust engagement”. The interim policy – which makes provision for certain exemptions on a case-by-case basis – will be reviewed at the end of the first semester next year.

The University of Free State (UFS) has adopted a vaccine mandate to be implemented in February next year. It said that consultation on the new policy was wide, and that its Senate had supported it with “an overwhelming 84%”.

A number of Afrikaans business and union configurations are among the holdouts. Civil rights organisation AfriForum said vaccine mandates were unjustifiable violations of personal freedoms and it would oppose vaccine mandates if implemented by the government. In a public letter to President Ramaphosa, AfriForum said although it was in favour of voluntary vaccinations, it opposed any forced vaccinations “as it infringes on people’s rights”.

According to AfriForum, international examples showed that when vaccines were mandatory, the opposite was achieved, due to hardened attitudes and the resulting backlash.“On the basis of the principle of freedom of choice and constitutional right to bodily autonomy, if the government implements vaccine mandates, AfriForum will take the necessary steps to oppose them,” says Ernst Roets, Head of Policy and Action at AfriForum.

Trade union Solidarity is also against mandatory vaccination. Its Research Institute head Connie Mulder said there had already been cases where employers had “sneaked the practice through the back door” and that there was legal ground to challenge such approach. “We encourage people to vaccinate, but no one should be forced.”

Sakeliga (Business League), an organisation of institutional entrepreneurs, said it was “deeply concerned” by the president’s suggestions “that vaccination could become compulsory, and his vagueness about what he intends to replace the state of disaster with”.

The organisation, however, said it welcomed his criticism of scientifically baseless foreign political decisions on travel-restrictions and his resistance to increasing lockdown levels in South Africa. “Unfortunately, the president’s encouraging statements are soured by an unjustified insistence that everyone should be vaccinated and that his administration is considering mandatory vaccinations for certain activities following ‘broad consultations’ on such a programme.”

It suggested Ramaphosa and B4SA, “should focus efforts on allowing his health department and private healthcare providers to get vaccines to those in this vulnerable minority who want them, not embarking upon … forced vaccinations across the entire population”.

Wouter Wessels of the Freedom Front Plus said the party welcomed the fact that a higher lockdown level had not been announced, and that Ramaphosa’s “earnest appeal to countries that have imposed a travel ban on South Africa makes it clear that even the ANC government now realises that South Africa cannot afford any more damage to its economy”.

“It is regrettable, though, that the president stirred up uncertainty about the immediate future with his statement that the COVID Command Council will meet again within a week's time to discuss events relating to the pandemic as they continue to unfold.

“Making vaccinations mandatory will not achieve the desired effect, it will only arouse opposition. Getting vaccinated must remain one’s own, free choice. Effective communication through an appropriate campaign aimed at motivating and persuading people to vaccinate will achieve a much more positive outcome in the fight against COVID-19.”

Mandatory vaccinations may be raised in Equality Court first