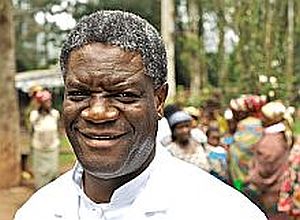 Nobel laureate gynaecologist Dr Denis Mukwege has been placed under the guard of UN security forces in the Democratic Republic of Congo (DRC) after receiving death threats. BBC News reports that the doctor was warned after making a series of statements deploring recent violence and calling for justice for perpetrators of possible war crimes committed in eastern DRC by militia, foreign troops and rebels.

The gynaecologist shared the Nobel Prize in 2018 for his work with victims of sexual violence in the DRC. BBC News reports that President Felix Tshisekedi has demanded an investigation into the threats.

The report says eastern DRC, where Mukwege is based, has been wracked by conflict for more than 25 years, fuelled by the area's rich mineral resource. The UN has a huge peacekeeping mission in the region but numerous armed groups still operate and carry out atrocities such as mass killings and rape. Mukwege is based near the town of Bukavu at the Panzi hospital, which treats women who have been raped.

According to the BBC News report, Mukwege has been targeted in the past after pointing the finger of responsibility at DRC's neighbours like Rwanda and Uganda. Threats against his life go back to October 2012 when his security guard died while facing gunmen who tried to shoot the Nobel prize laureate. It is not clear who was behind this assassination attempt.

Rights groups called for an investigation and reinforced security for Mukwege.

The report says the threats resurfaced a few months ago after Mukwege started denouncing killings in eastern DRC and demanding justice for human rights violations recorded in the UN's mapping report. This report was written by the UN Office of High Commissioner for Human Rights that talked to 1,200 witness and collected 1,500 documents to map human rights violations against civilians committed in the country between 1993 and 2003.

This is a period covers between the time Rwandan refugees fled the 1994 genocide and poured into Zaire, as DRC was then known, up to 2003, the end of the second Congo War. During this period Rwanda and Uganda had troops in DRC and were accused of crimes against humanity.

Demanding justice for these crimes means re-examining the responsibility of these neighbours and holding them accountable.

The report says Rwanda's General James Kabarebe, who led operations in DRC, recently categorised Mukwege as someone who had been manipulated by enemies of Rwanda to spread propaganda tarnishing the country's image. Currently, there is no evidence in the public domain linking this statement to the threats that Mukwege says he has received and Kabarebe has not commented.