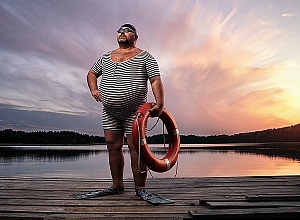 Against expectations, French researchers have found obese hospitalised patients were at no greater risk for ventilator-associated pneumonia than those of normal weight, writes John Gever for MedPage Today. The case supports the ‘obesity paradox’, in which people with excess body fat survive some illnesses better than people of normal weight.

Secondary analysis of data from the NUTRIREA2 trial, a randomised comparison of feeding methods in mechanically ventilated patients, showed a 10.1% incidence of ventilator-associated pneumonia (VAP) in obese participants (BMI 30 or greater) versus 8.6% for those with BMI values less than 30.

This is according to Dr Saad Nseir of Centre Hospitalier Universitaire de Lille – CHU Lille – and colleagues, writing in the journal CHEST, says the 16 June 2021 article in MedPage Today.

The corresponding hazard ratio of 0.85 did not come close to statistical significance in the analysis (95% CI 0.63-1.14, P=0.26), which included 699 obese and 1,626 non-obese patients. And the difference shrank, remaining non-significant, after adjustments for risk factors including age, sex and baseline Sequential Organ Failure Assessment and McCabe scores.

Moreover, death within 90 days was significantly less frequent in the obese group (39.3% vs 44.7%, P=0.02) – classical expression of the so-called ‘obesity paradox’, in which patients with substantial excess body fat survive certain illnesses better than those of normal weight.

That it would show up in a study of VAP was particularly surprising, Nseir and colleagues explained, because previous studies had shown that obese individuals were more likely to develop community-acquired and healthcare-associated infections, and VAP is an important component of the latter, writes Gever in in MedPage Today.

In fact, the researchers noted, no previous study had looked at VAP specifically. So they turned to NUTRIREA2, an open-label trial conducted in France that tracked outcomes of hospitalised patients receiving mechanical ventilation. (The study's main goal was to evaluate mortality with early enteral versus parenteral feeding.)

VAP developed in 224 of the trial's 2,325 participants, including 60 who were obese. (Nseir and colleagues included only patients developing shock along with VAP.) There were no differences between the obese and non-obese groups in short-term outcomes, including successful extubation, duration of ventilation, and death.

Also, to address one possible difference between obese and non-obese participants that could contribute to VAP risk and outcomes – the likelihood of microaspiration of stomach contents or nasopharyngeal secretions – Nseir and colleagues analysed tracheal samples from 123 patients for pepsin and alpha-amylase. No differences in these markers at levels indicating ‘abundant’ microaspiration were seen.

Why didn't the obese patients suffer higher rates of VAP or worse outcomes? asks Gevers in in MedPage Today.

Nseir and co-authors had no definitive answer, but offered two potential explanations. Characteristics of the obese and non-obese groups differed in many respects, not all of which were addressed in the study's statistical adjustments.

More basically, the researchers suggested that the main drivers of VAP risk and adverse outcomes in critically ill patients may well be similar irrespective of obesity. These include duration of ventilation, bacterial colonisation in the respiratory tract, and aspiration of dangerous materials.

The in MedPage Today article continues: In an accompanying editorial in CHEST, two researchers said the findings add to the evidence that obesity – at least at moderate levels – is indeed protective in critically ill patients.

But the analysis also leaves many questions unanswered: would the results have been different if Nseir and colleagues had included VAP patients not progressing to shock?

The study authors and editorialists agreed that it probably would not have mattered, but also that the issue should be addressed in future research. As well, they also agreed that the analysis did not consider all potential confounding factors and that these, too, need to be investigated in prospective studies.

* John Gever was Managing Editor of MedPage Today from 2014 to 2021. He is now a regular contributor.

Patients with obesity are at higher risk for community-acquired and nosocomial infections. However, no study has specifically evaluated the relationship between obesity and ventilator-associated pneumonia (VAP).

Is obesity associated with an increased incidence of VAP?

This study was a post hoc analysis of the Impact of Early Enteral vs Parenteral Nutrition on Mortality in Patients Requiring Mechanical Ventilation and Catecholamines (NUTRIREA2) open-label, randomized controlled trial performed in 44 French ICUs.

VAP diagnosis was adjudicated by an independent blinded committee, based on all available clinical, radiologic, and microbiologic data. Only first VAP episodes were taken into account. Incidence of VAP was analyzed by using the Fine and Gray model, with extubation and death as competing risks.

In a subgroup of patients (n = 123) with available pepsin and alpha-amylase measurements, no significant difference was found in rate of abundant microaspiration of gastric contents, or oropharyngeal secretions between obese and nonobese patients.

Our results suggest that obesity has no significant impact on the incidence of VAP.

Heart failure and the obesity paradox

'Obesity paradox' is a significant factor in metastatic melanoma survival

Explaining the 'obesity paradox' of CVD