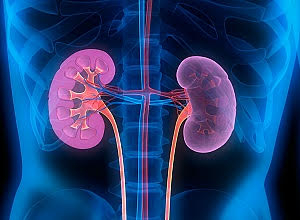 “Pembrolizumab is a potential new standard of care for patients with RCC in the adjuvant setting” said Choueiri, noting that KEYNOTE-564 is the first positive phase III study of an adjuvant immunotherapy in RCC. Currently, there is no accepted standard adjuvant therapy with a high level of evidence, he said.

The overall survival (OS) rate reached 96.6% at 2 years in the investigational arm versus 93.5% in the placebo arm (HR 0.54, 95% CI 0.30-0.96), though the difference missed prespecified criteria for statistical significance. With 18 deaths in the pembrolizumab arm and 33 in the placebo arm (26% of events for the final OS analysis), the OS data remain immature, said Choueiri.

Significant biomarker testing is in the works, Choueiri said, with patients' tumor tissue having been assessed for PD-L1 expression.  “At the end of the day, there are patients that may need surgery alone even if they're higher risk and other patients that would benefit from pembrolizumab,” he said.

The open-label, multicenter KEYNOTE-564 trial randomized 994 patients with high-risk clear cell RCC 1:1 to either a year of pembrolizumab (200 mg/kg every 3 weeks) or placebo following surgery. Criteria for high-risk disease included:

“Safety results overall were in line with expectations, without any new safety signals,” said Choueiri.

Treatment-related AEs of any grade were more frequent with pembrolizumab (79.1% vs 53.4% with placebo), as were treatment-related grade ≥3 AEs (18.9% vs 1.2%, respectively). No deaths were attributed to treatment in either arm.

Background:
Relapse after surgery for high-risk clear cell RCC (ccRCC) is associated with shortened life expectancy. Effective perioperative therapy to reduce this risk remains an unmet need. Adjuvant immune therapy is an attractive potential strategy for these pts. We conducted the KEYNOTE-564 trial to evaluate pembro vs placebo as adjuvant therapy for pts with RCC.

Methods:
KEYNOTE-564 is a phase III multicenter trial of pembro vs placebo in pts with histologically confirmed ccRCC, with intermediate-high risk (pT2, Gr 4 or sarcomatoid, N0 M0; or pT3, any Gr, N0 M0), high risk (pT4, any Gr, N0 M0; or pT any stage, any Gr, N+ M0), or M1 NED (no evidence of disease after primary tumor + soft tissue metastases completely resected ≤1 year from nephrectomy) (Leibovich et al, 2003; Fuhrman et al, 1982). Pts had undergone surgery ≤12 wks prior to randomization; had no prior systemic therapy; had ECOG PS 0 or 1. Study treatment was given for up to 17 cycles (≈1 yr). The primary endpoint was disease-free survival (DFS) per investigator assessment in all randomized pts (ITT population). Overall survival (OS) was a key secondary endpoint. Safety/tolerability were secondary endpoints, assessed in all treated pts.

Conclusions:
Pembro demonstrated a statistically significant and clinically meaningful improvement in DFS vs placebo in pts with intermediate-high, high risk or M1 NED RCC. Additional follow-up is planned for the key secondary endpoint of OS. KEYNOTE-564 is the first positive phase III study with a checkpoint inhibitor in adjuvant RCC, and these results support pembro as a potential new standard of care for pts with RCC in the adjuvant setting. Clinical trial information: NCT03142334

Preliminary report presented at the American Society of Clinical Oncology