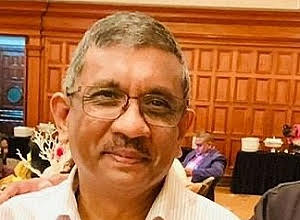 Ponnusamy held the position of head of the clinical unit at the University of KwaZulu-Natal's department of cardiology at the Inkosi Albert Luthuli Hospital at the time of his death. He had held the post for 12 years, but joined the cardiology department as a trainee in 2004.

In a statement released by the UKN College of Health Sciences, acting head of cardiology Professor DP Naidoo said Ponnusamy "dedicated himself to serving the department and his community".

A guard of honour was held by staff and medical personnel at the Inkosi Albert Luthuli Hospital after Ponnusamy died, says an IoL report. Ponnusamy, who was the chief cardiologist and also a former freedom fighter died after spending two months in the hospital's intensive care unit (ICU).

“It was a devastating loss for us. He died of COVID-19 after two months here at the ICU. We all hoped that he would improve, and he did improve for a while, but then he took a turn for the worse.”

Naidoo said Ponnusamy will be remembered for his discipline in the department of cardiology. “He managed his job in an exemplary fashion. We attribute the department running so smoothly to him. People admired him and his contribution, and that’s something that you don’t see very frequently,” said Naidoo.